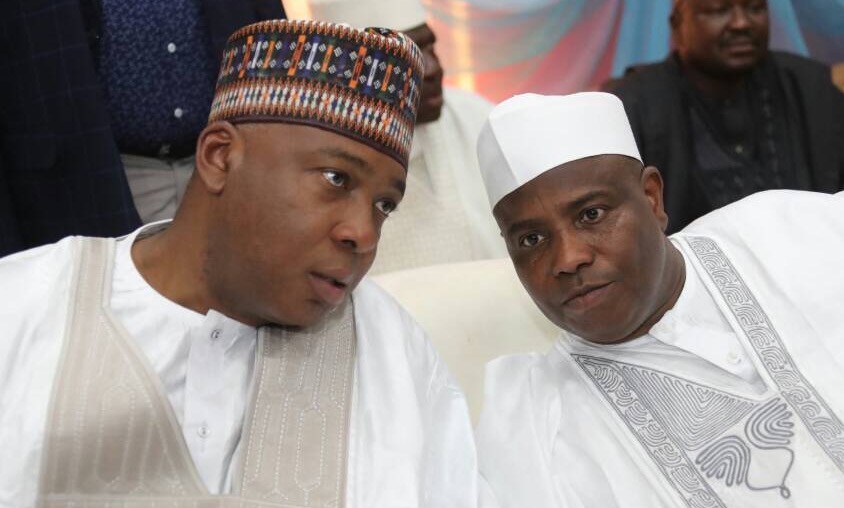 Senate President Bukola Saraki, who announced his aspiration for the office of president, may be pitted with his ally and governor of Sokoto State, Alhaji Aminu Tambuwal, who has picked his nomination form for the same office on the same ticket of Peoples Democratic Party (PDP).

There are a dozen of other bigwigs of the party, many of whom belong to the same political camp.

Many of them defected at the same time from the ruling All Progressives Congress (APC) to regroup to upstage traditional members of PDP.

Among others gunning for the slot are a two- time governor of Kano, Alhaji Rabiu Kwankwaso; ex-Vice President Atiku Abubakar; ex-governor of Jigawa, Alhaji Sule Lamido and others.

Tambuwal who arrived the party’s National Secretariat, Wadata Plaza, with his supporters at few minutes 6.p.m, left at about 7. 10 p.m.

Tambuwal told newsmen shortly after he picked the form that he was confident that the PDP leaders would conduct credible elections, if the aspirants did not go for consensus candidate.
‎
“I can’t say there is no need for consensus; it is part of democratic process. If there is a possibility of it, why not? If it is not possible, then, we all go for the primaries.

“But I believe that PDP of today is capable of organising free, fair, credible and transparent primaries.”

Tambuwal said that going by his antecedents he had the capability to confront the All Progressives Congress (APC) and its likely candidate.

“I believe you need to check back my political antecedents. I have always confronted with this kind of hostile environment.

“So I am not discouraged by whatever that may come up as a challenge from the administration.”

On the issue of herdsmen/farmers crisis, Tambuwal said it was a major security concern to every Nigerian.

“We must look at the issue very comprehensively and proffer solution to it.

“I believe it is an ‎issue every responsible government must address and I assure you we can take it head on and resolve it. “(NAN)