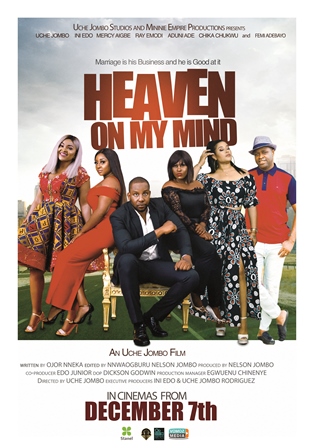 Less than two weeks ago, celebrities in all their glamour attended the premiere of Uche Jombo and Ini Edo’s Heaven On My Mind movie. Not many would predict that the movie will open to not just critical acclaims but also create box office record. Heaven On My Mind opened across cinemas on Friday, December 7 and has instantly gone on to be in the top two categories of the highest grossing movie for the weekend.

The movie continues to show in all cinemas nationwide as the stars of the movie, Ini Edo, Mercy Aigbe, Uche Jombo, Femi Adebayo, Adunni Ade, Ray Emordi and others set to storm different cinemas for Meet and Greet with their fans. Some of their entertainment colleagues are joining them as well.

Heaven on my mind follows the story of Ben Peters who believes that marriage is a business transaction and he works really hard at it, his wife is sexy, a goal getter, hardworking and intelligent woman who never denies him sex. This, however, would have been an amazing love story if he was talking about just one woman.

Heaven on my mind is pinned to open across cinemas nationwide from December 7th, 2018.

‘There is gossip, envy, backstabbing in Nollywood’ – Iyabo Ojo