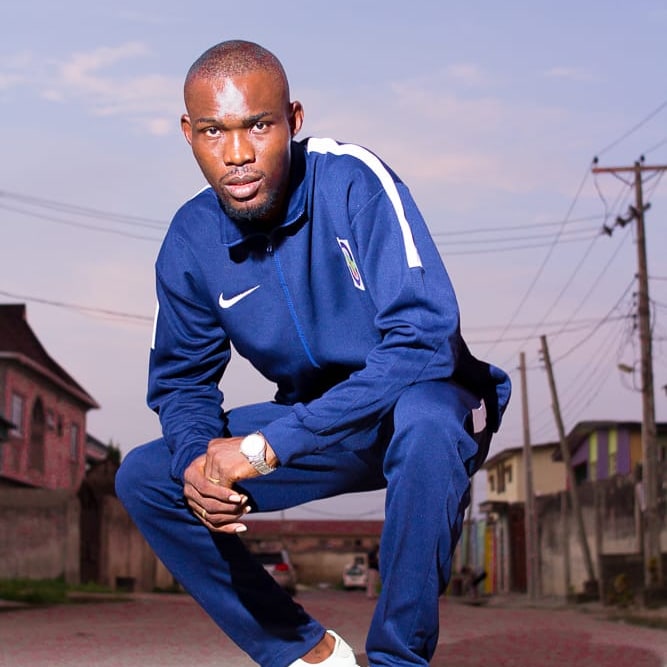 Young and vibrant Prince KOLAWOLE Oripinye is a genius when it comes to the round letter game. Apart from being a footballer, he is a coach, and also manages soccer team. He spoke about his online football platforms to showcase Oduduwa football leagues, teams, players, among others across Oduduwaland.

*CAN WE MEET YOU?**
I am Prince Kolawole Oripinye

*What is O.F.A?*
O.F.A means Oduduwa football Association. Oduduwa Football Club is an online platform to showcase football leagues across Oduduwaland, teams, players, matches scores & videos in Oduduwaland. This will enable foreign football clubs & scouting agents to have the opportunity of monitoring and buying players from Oduduwaland.

*WHAT IS YOUR POSTION IN THE ASSOCIATION?*
I am the Association Manager and Director.

*WHAT IS THE VISION OF THE ASSOCIATION?*
Our vision state is to help youth in developing there sporting talent and make them a better person in our dear society. Bringing youth from the street reduces hooliganism in our societies. Also to bring unity between old and young ones.

*HOW LONG HAVE YOU BEEN IN SPORTING BUSINESS?*
I have been in the sporting business for over one and half decades.

*TELL US ABOUT ODUDUWA FOOTBALL ASSOCIATION.*
Oduduwa Football Association is an online platform to showcase football leagues across Oduduwaland, teams, players, matches scores & videos in Oduduwaland. This will enable foreign football clubs & scouting agents to have the opportunity of monitoring and buying players from Oduduwaland. Note that before you can buy any player – it must be approved by Oduduwa Football Association (OFA). Oduduwa Football Club’s website is positioned to become the information hub of all grassroots football competitions, matches, players, coaches, and teams within Oduduwaland. We shall also be managing football competitions and friendly matches, and live scores. Registrations of clubs and players are opened to every football clubs and academy within the 8 States of Oduduwaland.
We organized the first edition of our tournament in April 19th to 23rd 2022, which we brought both male and female players together in six states namely, Osun, Ondo, Oyo, Ogun, Lagos, Ekiti. We are also planning to add Kwara and kogi in the second edition.

*WE SEE YOU HAVE DONE LOTS SIR, BUT TELL US, ARE YOU THE ONLY ONE ON THIS PROGRAM?*
No sir, let me just say this here, I am the visioner of Oduduwa Football Association and Oduduwa Football Tournament is my initiative. But because it is a big vision I call in some people who are specialties in their various field of work. Also note that
*ODUDUWA FOOTBALL ASSOCIATION
ODUDUWA FOOTBALL ACADEMY
ODUDUWA FOOTBALL TOURNAMENT*
is my initiative but I have wonderful and understanding partners who saw the future of what I brought to them, they key into the vision and they give the program there full support.

*WHERE DO YOU SEE ODUDUWA FOOTBALL ASSOCIATION IN 10YEARS?*
Firstly, I will says ODUDUWA FOOTBALL ASSOCIATION is for all Yoruba people both home and abroad, I believe that someday, sometime or somehow, some people will come in and take the project up. Am just the founder and am looking forward to a greater tomorrow
More opportunity for the youth, spirit of development, promotion, spirit of togetherness, spirit of unity, spirit of teamwork and sportsmanship and also bring them close to education which is 100% important.

Related Topics:FeaturedOduduwa Football Association
Up Next The tennis star said retirement had become necessary so she can dedicate more time to her family.

“Believe me, I never wanted to have to choose between tennis and a family. I don’t think it’s fair. If I were a guy, I wouldn’t be writing this because I’d be out there playing and winning while my wife was doing the physical labor of expanding our family. Maybe I’d be more of a Tom Brady if I had that opportunity,” she wrote in the lengthy article.

“Don’t get me wrong: I love being a woman, and I loved every second of being pregnant with Olympia. I was one of those annoying women who adored being pregnant and was working until the day I had to report to the hospital—although things got super complicated on the other side. And I almost did do the impossible: A lot of people don’t realize that I was two months pregnant when I won the Australian Open in 2017. But I’m turning 41 this month, and something’s got to give.”

Continuing, she writes, “I have never liked the word retirement. It doesn’t feel like a modern word to me. I’ve been thinking of this as a transition, but I want to be sensitive about how I use that word, which means something very specific and important to a community of people. Maybe the best word to describe what I’m up to is evolution. I’m here to tell you that I’m evolving away from tennis, toward other things that are important to me. A few years ago I quietly started Serena Ventures, a venture capital firm. Soon after that, I started a family. I want to grow that family.

“But I’ve been reluctant to admit to myself or anyone else that I have to move on from playing tennis. Alexis, my husband, and I have hardly talked about it; it’s like a taboo topic. I can’t even have this conversation with my mom and dad. It’s like it’s not real until you say it out loud. It comes up, I get an uncomfortable lump in my throat, and I start to cry. The only person I’ve really gone there with is my therapist! One thing I’m not going to do is sugarcoat this. I know that a lot of people are excited about and look forward to retiring, and I really wish I felt that way. Ashleigh Barty was number one in the world when she left the sport this March, and I believe she really felt ready to move on. Caroline Wozniacki, who is one of my best friends, felt a sense of relief when she retired in 2020.” 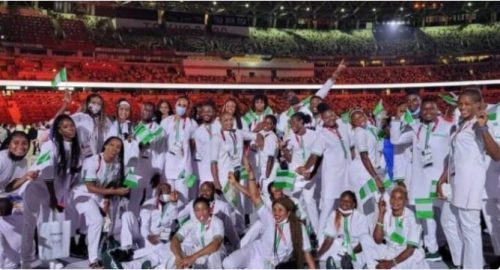 It was a record-breaking outing for Team Nigeria at the 2022 Commonwealth Games (CWG) in Birmingham, as medals were raked in at an unprecedented rush while Nigerian athletes broke several records at the games.

Team Nigeria won 12 gold medals — the country’s highest haul in the history of the CWG.

Incredibly, all the gold medals were won by female athletes who took the tracks and gymnasiums in Birmingham by storm and wrote their names in the annals of the competition.

Tobi Amusan surged to the finish line in 12.30 seconds in the final of the women’s 100-meter hurdles to set a CWG record. Ese Brume registered a record-setting 7-meter leap in the long jump.

In the women’s 4×100 meters, the quartet of Amusan, Favour Ofili, Rosemary Chukwuma, and Grace Nwokocha cruised to gold while setting a new African record with a time of 42.10 seconds.

Nigeria finished the competition with 35 medals — 12 gold, 9 silver, and 14 bronze — to clinch seventh on the leaders’ table as the final day of activities wraps up.

Athletics provided the most medals for Nigeria with 10 podium finishes, followed by wrestling with seven.

Below is the full list of all 35 medalists for Team Nigeria at the 2022 CWG: 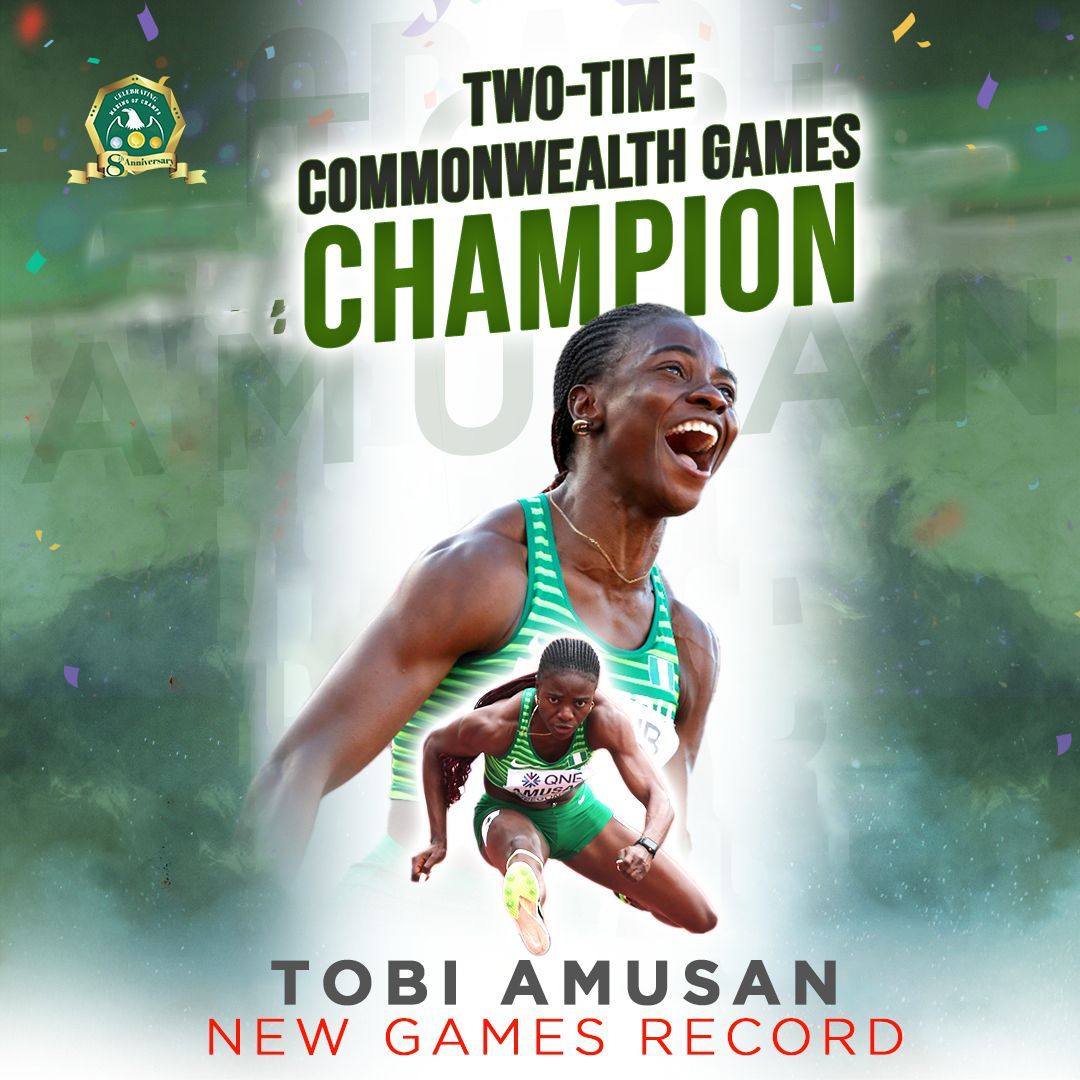 “Our golden girl has done it, again. This is a testament to the fact that she is consistent, reliable and deserved the World record, indeed. This is a moment of joy for us all in Ogun State and Nigeria and we are pleased at her streak of successes”, Gov. Abiodun said in a statement issued by his Chief Press Secretary, Kunle Somorin

The world champion had on Sunday successfully defended her title at the Alexander Stadium in the women’s 100m hurdles final by running a Games record of 12.30sec thus defending her Commonwealth title and setting another record in the process on Sunday.

According to the governor, this made her “the first World Champion to win Gold in the event and the first Nigerian athlete ever – dead or alive – to be crowned champion at all levels of athletics in the same year.”

Congratulating the Ogun state born athlete, the governor described her feat as heroic, saying this is following and improving on the records of her other Ogun stars like Modupe Oshikoya, Falilat, Ogunkoya-Osheku and other compatriots.

Abiodun, who said that the sprinter has made Ogun, Nigeria and indeed Africa proud at the Games, lauded her spirit of excellence on the tracks. The governor noted that though Ogun is known for being the home of illustrious personalities in every human endeavour, the achievements recorded by Amusan, has further the state on a global pedestal.

“Amusan is a compatriot with prodigious talents reflecting the standard of excellence that our State is noted for. Our state is reputed for exemplary courage, consistency, integrity, and good sportsmanship. Tobi has exhibited these on the world stage, by proving again and again that that success is achievable with hard work and determination.

While urging the world champion to savour her victory at the Commonwealth Games, Abiodun, implored her not to rest on her oars and continue to make Ogun proud

“It is with joy that I received the news of Tobi Amusan’s triumph at the Commonwealth Games in the United Kingdom. This is indeed another great feat recorded by one of our finest exports in Ogun.

“With this latest feat, it has now become clear that Amusan’s gold medal at the World Athletics Championship held in Eugene, Oregon, USA, was not a fluke. She has shown to the world she is consistent and not a flash in the pan.

“On behalf of the government and people of Ogun, I say big congratulations to one of our finest in the field of sports. Oluwatobiloba Amusan has once again made us proud as a people. In Ogun, we shall continue to celebrate our icons and stars, while we shall also continue to encourage the budding talents across Ogun”. Abiodun was quoted to have stated in the statement.