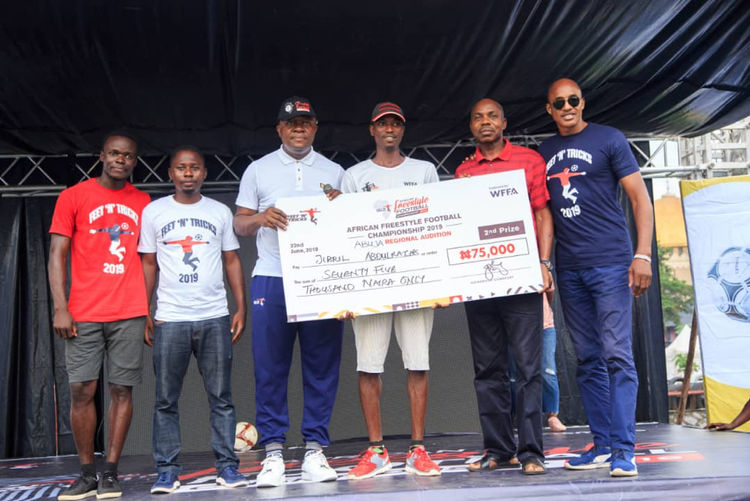 2019 edition of the 2 days freestyle football championship held at the Balmoral Convention centre has come to an end as winners emerges in both male and female category.

In the male category Benjamin John emerged as the National champion winning prize of N500,000 Naira, an all expense paid trip to the Red Bull World event in Miami, while Austin Abaribote and Blessing Ezeakubudu as second and third respectively.

Augustina Unamba emerged as winner in the female category, as Blessing Faith and Evelyn Okafor got the second and third place respectively.

Last year winner of the African Freestyle Football  Championship Abdoul Titi Kone of Ivory Coast defeated Yousef Aiman Riesco of Egypt to clinch the title for the second time in a row with a grand prize of $3000.

In the African female category, Nigerian Evelyn Okafor defeated Hadhar Mohammed of Tanzania in the finals for the  $2000 grand prize.

The first edition of the freestyle football championship was held in 2017 with the purpose of creating a platform for talented Africans to showcase their skills and ultimately exploit the global appeal of freestyle football.

The Chairman of Feet ‘n’ Tricks, organiser of the event  Valentine Ozigbo expressed his satisfaction by the level of turnout of guest at the event. He said “Today’s event marks the beginning of yet another remarkable moment for the Feet ‘N’ Tricks team, the WFFA, our freestylers and sponsors. Having done this since 2017, the turn out this year is an affirmation on the significant level of awareness and appreciation freestyle football has earned in Nigeria and Africa.”

The event which was anchored by popular street dancer Poco Lee, superstar hypeman Shody alongside beauty entrepreneur Ifuennada who thrilled the guest with their fascinating dance steps.