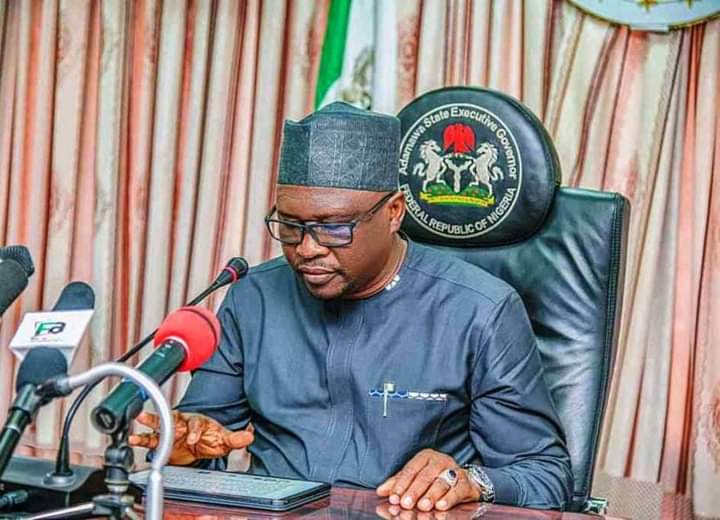 Global News Reports That Since the Assumption of duty in 2013, nine years after the staff of office was handed over to Ngida Zakawa, the Michika ruler has not assume his rightful duties in his palace.

years after his resumption of duty as the District Head of Michika, Ngida Zakawa Kwache, the paramount and substantive district head who is also a grandson of the founder of Michika is yet to be granted access to his ancestral palace of his forefathers.

A development that is brewing tension in the District. Our investigation revealed that governor Fintiri is spearheading the uncharitable act. Sources also revealed that he is insisting the paramount chief should move to a new location which is against the tradition of his forefathers, who occupied the stool before him. It is believed that the palace has been the abode of every king that ascends the throne for the past fifty years.

Moreso, the sitting governor was massively voted by the Michika people of Adamawa state a development that its expected the governor should reciprocate the gesture of the people by granting the High chief to occupy his rightful abode as forefathers did.

Worrisome is the fact that the traditional palace is built by the Michika local government and not the state government as the governor will want people to believe.

However the traditional institution is under the purview of the local government and chieftaincy affairs directly under the governor’s office. So it’s expected that governor Fintiri will do the needful as a man that respects tradition rites.

Intrigues that characterised the election and The throne of Michika traditional council.

The emergence of Zakawa as the high chief of Michika faced a lot of issues and challenges leading to building concerns within the district with the suspicion that the move may have been a deliberate act by the Mubi Emirate Council, which is perceived to be holding unto a petition against the election of Ngida Zakawa by one of the contestants not to turban him even when his staff of office has since been given to him.

This is even as the court before which the petition was brought is was yet to issue any order, restraining Ngida Zakawa from parading himself as district head of Michika.

Most worried by this development was Association of Michika Concerned Citizens and Concerned Michika elders. They were particularly concerned that after the former Governor of the state, Mohammed Bindo had already issued a letter of appointment to Ngida Zakawa as well as given him a staff of office, he was not turbaned by the Emirate Council, up until 2018.

To collaborate this, the then Chairman of Michika Local Government Area Council, Hon. Mathew Vendi Favandzaer had at the official opening of the palace then , made known, the state government’s directive for the council to hand over the district head office for Ngida Zakawa’s use, having fulfilled all requirements of the office.

When our reporter contacted the then Secretary to Michika Local Government Council, Mr. Gidado he confirmed that Ngida’s turbaning is stalled due to an appeal before the court, challenging his election. According to him, “There are issues concerning the throne.

One of the sons of the late district head had approached the court to challenge the election of Ngida Zakawa and until that is settled before the turbaning process will start”, he said.

The history of Michika district headship dates back to the departure of the colonial master who at the point of leaving, conducted elections to install a district head.

The election was won by Stephen Kontikwara who is an uncle to Ngida Zakawa. However, the fact that he was too young and not yet married, gave rise to the emergence of Kufor Maunde Mohammadu, who served in acting capacity as district head of Michika for fifty three (53) years.

Investigations reveal that before his demise, the late acting district head had warned his children not to participate in the contest for the district headship since he was not originally supposed to occupy the throne. However, one of his sons, Alhaji Chubado…….. insisted on contesting which he lost and he took the matter to court.

Two reasons were adduced for the delay in assumption of office by Ngida Zakawa. The fact that Boko Haram took over Michika as well as the court litigations against his election as district head.

However, upon the return of peace in Michika, the state government directed that Ngida Zakawa should resume duty as district head, yet the Mubi Emirate council whose responsibility it is to turban him are still holding unto the litigation against his election not to turban him.