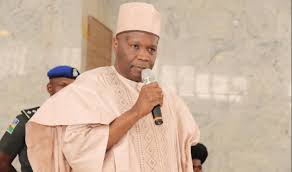 Governor of Gombe State, Muhammadu Yahaya has sworn in not less than 5 jugdes, on Monday.

The judges in the high court include Zainab Rasheed, Abdulsallam Muhammad, and Sikam Suleman. The grand khadis for the sharia court of appeal include Adamu Jibrin and Ahmed Bababala.

The newly inaugurated judges were charged to uphold equity and fairness by ensuring that justice is served to all.

Yahaya who performed the function at the new banquet hall of the Government House on Monday noted that there was no better time than now for the appointment of the men and women whom he described as eminently qualified.

According to him, this was a sequel to the retirement of high court judges and sharia court of appeal grand khadis upon attaining the retirement age.

He said, “Let me start by congratulating the justices on the confirmation of their appointments by the National Judicial Council. This was necessitated by the retirement of judges in the state who attained the mandatory retirement age.

“The newly sworn-in judges and grand khadis are adjudged to be persons of experience and maturity, forthrightness and deep knowledge on jurisprudence, Jurist per excellence. I believe they will be of benefit not only to the judiciary, the state, and the country at large.

“It is indeed reassuring that this calibre of people are been appointed to the top echelon of the state judiciary at this crucial time when the nation requires a strong judicial system that can address the challenges with effective administration of justice.”

The governor noted that their educational background would be a plus to the strengthening of the ailing system, stressing that he is confident of the results their promotion would yield.

“Considering their strong education, dedication to duty as well as vast experience garnered over time. I’m confident they will bring insight that will further strengthen the judicial and consolidate our democratic system.

“At the commencement of this administration I requested for a comprehensive report in order to obtain first-hand information on the challenges militating against the administration of justice system in the state,” Yahaya added

Related Topics:Yahaya swears in five judges
Up Next