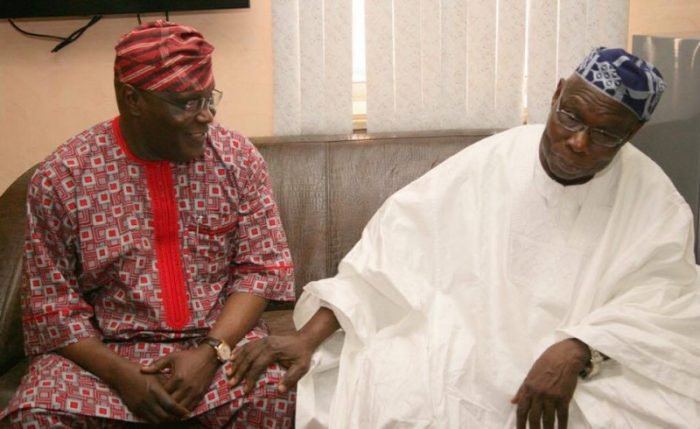 Arising report indicates former Vice President, Atiku Abubakar, is sure to be the fourth time lucky, as he throws his hat into the ring to contest the forthcoming 2019 Presidential election.

Post-Nigeria reliably gathered that former President, Olusegun Obasanjo, has secretly endorsed Atiku, because of the failure of the President Muhammadu Buhari-led the government to bring the desired changed.

“Apparently aware of Atiku’s intimidating political structures across the nation, Obasanjo has likely endorsed him”, a source said.

Post-Nigeria’s investigation revealed that Atiku is reputed to have sauntered into the fourth republic, with the huge measured quantity of democratic credentials.

Atiku established himself as a Democrat immediately he left the public service, and became a political devotee of late Gen. Shehu Musa Yar’Adua, an acclaimed great political tactician that flounced the country like a hurricane.

His political history is legendary: a Politician, Businessman, and Philanthropist. He was born on November 25, 1946, and in the beginning of his national political career, served as the second elected Vice President, from 1999 to 2007, under the umbrella of the Peoples Democratic Party, PDP, with President Olusegun Obasanjo.

Atiku worked in the Nigeria Customs Service for 24 years, rising to become the Deputy Comptroller-General. He retired in 1989, and took up full-time business and politics.

He ran for the office of Governor in the Gongola State (now Adamawa and Taraba States) in 1991; and for the Presidency in 1993, coming third after MKO Abiola and Babagana Kingibe, in the disbanded Social Democratic Party, SDP, primaries.

In 1998, he contested and won the Governor of Adamawa State. And while still Governor-elect, he was picked by the PDP Presidential candidate, Olusegun Obasanjo, as his running mate. They went into the election and won in 1999.

As documented by Historians, Atiku’s second term as Vice President, was characterised by a squally relationship with Obasanjo.

His attempt to succeed Obasanjo did not receive the latter’s support, and it took the judgement of the Supreme Court to allow him to contest in 2007, after he was initially disqualified by the Independent National Electoral Commission, INEC, over an alleged financial misconduct by a “discredited” investigating panel, set up by Obasanjo.

The apex court later ordered the Electoral Commission to restore Atiku’s name onto the Presidential ballot, and he ran on the platform of the Action Congress, AC, having quit the PDP on account of his issues with Obasanjo.

Expectedly, he lost the election, coming third after the late Umaru Musa Yar’Adua, and Muhammadu Buhari of the then All Nigeria Peoples Party, ANPP.

As a “consummated” Businessman, Atiku is a co-Founder of Intels, an oil servicing business with wide ranging operations across the country and outside the country. He is also the founder of Adama Beverages Limited, and the American University of Nigeria, AUN, both in Yola, the Adamawa State capital.

Born to an itinerant Fulani Trader and Farmer, Garba Abubakar, the former Vice President was said to have started out in the real estate business during his early days as a Customs Officer.

History has it that in 1974, he applied for and received a N31,000 loan to build his first house in Yola, which he put up for rent. From proceeds of the rent, he was reported to have purchased another plot, and built a second house. He was said to have continued that way, building a considerable range of property in Yola.

Apparently very go-getting in investment, he was said to have later moved into agriculture, acquiring 2,500 hectares of land near Yola, to start a maize and cotton farm. The business fell on hard times and closed in 1986. “My first foray into agriculture in the 1980s, ended in failure”, he was quoted as saying.

Later venturing into trading, buying and selling truckloads of rice, flour and sugar, Atiku’s most important business move, was to have come while he was a Customs Officer at the Apapa Ports.

One Gabrielle Volpi, an Italian Businessman in Nigeria, was said to have invited him to set up the Nigeria Container Services, NICOTES, a logistics company operating within the Ports. Those who know him very well said that NICOTES provided immense wealth to Atiku.

Atiku’s first expedition into politics was in the early 1980s, when he worked behind the scenes on the Governorship campaign of Alhaji Bamanga Tukur, who at that time was Managing Director of the Nigeria Ports Authority.

He canvassed for votes on behalf of Tukur, and also donated to the campaign. Towards the end of his Customs career, he met late General Shehu Musa Yar’Adua, who had been second-in-command of the Military Government that ruled Nigeria between 1976 and 1979. Atiku was drawn by Yar’Adua into the political meetings that were now happening regularly in Yar’Adua’s Lagos home.

In 1989, Atiku was elected as National Vice Chairman of the Peoples Front of Nigeria, PFN, the political association led by Yar’Adua, to participate in the transition programme initiated by Babangida.

Atiku won a seat to represent his Constituency at the 1989 Constituent Assembly, set up to decide a new Constitution for Nigeria. The Peoples Front was eventually denied registration by the government (none of the groups that applied was registered), and found a place within the Social Democratic Party, one of the two parties decreed into existence by the regime.

Many of his followers have said time without number that a “tested hand” like Atiku, is surely needed to coordinate the proper integration of the youths into the economic mainstream.

“He is the highest individual employer of labour in Nigeria, and a believer in excellence. The truth that cannot be dismissed, is that among those jostling to convince Nigerians for their votes in 2019, only the Turaki has experience in job creation. This is the choice Nigerians must make in 2019, without sentiment and pandering to the propaganda of surrogates of past failures”, one of his followers said.

“The fragility of our mutual existence as a country cannot be over exaggerated. As a matter of fact, the erosion of our cultural, religious, and social commonalities, is an ever constant feature of the past two decades.

“There is need to undertake enormous reintegration of all divergent groups into a united country. Nobody can do it better than Atiku. He is a proven man of immense conviction and political muscles, to navigate us to the destination of unity.”