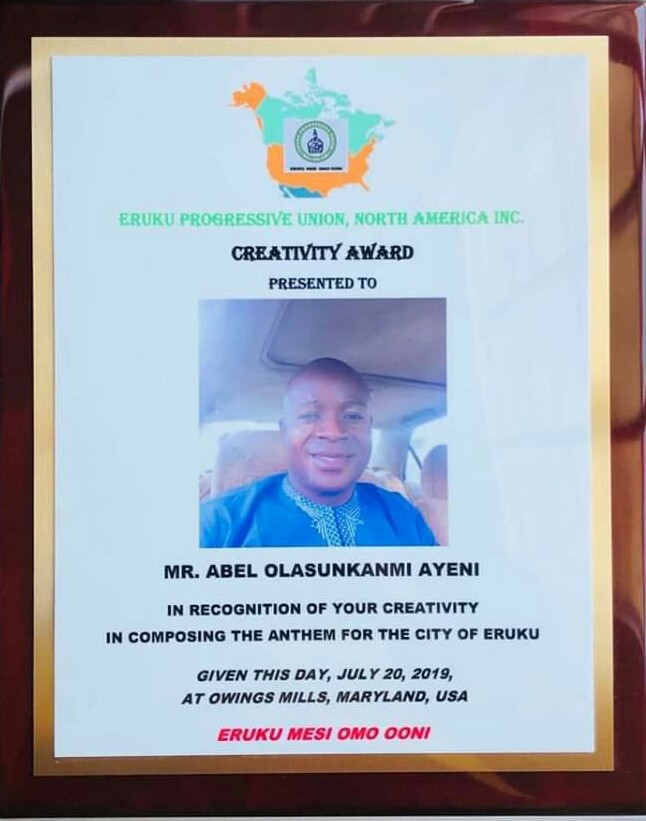 One of our very own;Mr Abel Olasunkanmi Ayeni, was on the 20th of July;2019 honoured at ‘Owings Mills;Maryland,USA’.

The young but gallant Officer of NSCD,has risen through the ranks in the security agency. Gallantry,combatant and cuteness – all conjugates,when he is seen in the uniform.

He hails from Ayeni’s Family, in Odolomu area of Eruku. His elementary education commenced from same town,without any form of dent.

An astute achiever:Sunkanmi is one of the generations of elites,who has fought tirelessly,in establishing and sustaining December’s annual event; ‘ANKARA NIGHT,’ an avenue for uniting sons and daughters of ‘Eruku Mesi Omo Ooni’ both at home and in diaspora. It is worthy to emphasise that,Ankara Night cannot be discussed in its entirety, without a mention of Sunkanmi and his numerous sacrifices.

It is usually said that,the things that are seen,are controlled by the things not seen. Just as simply put,those of Christian faith would say,”the spiritual controls the physical.” In that vein therefore,all accolades about this industrious son of our land may not be complete,without a mention of his spirituality and religious influences: Sunkanmi wielded great influence; towards the development of Methodist Church Choir,Odolomu Eruku. He is one of the pioneers of Methodist Catheral Choir,Taiwo Isale road;Ilorin.

While discharging his duties;in various capacities in the church,he is one of the few known youths,who adhered to biblical counsel of not having one’s youth despised. A young man,who lives his life in sanctity,purpose and in the fear of God.

This meritorious award has not come on a platter of gold,he has sacrificed for it. It is deserving of a man with the heart of gold, a man who never looks down on anyone,but is readily available to contribute his quota, to every good course.

“How The God of T.B. Joshua Saved me from Fatal Accident’- Engr. Akinbola Fatiregun