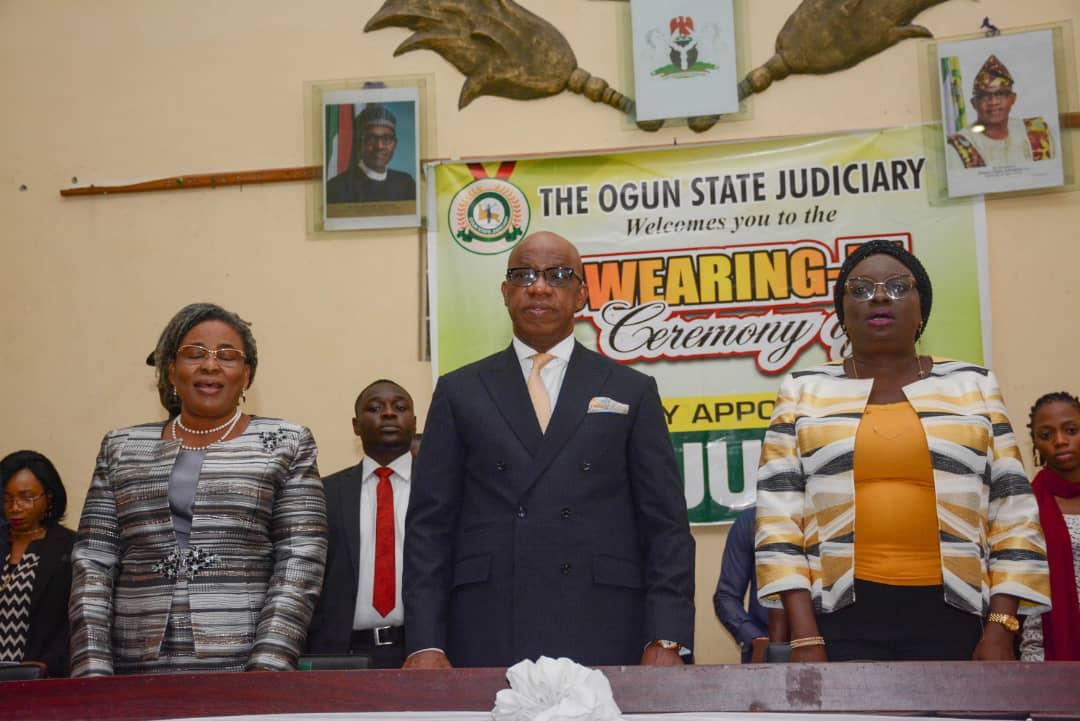 Ogun State Governor, Prince Dapo Abiodun, has ordered that the last minute appointments of Permanent Secretaries made in the twilight of the immediate past administration of Senator Ibikunle Amosun be regularised.

The Governor also directed the mainstreaming and ‘regularisation’ of appointment of over 1000 graduates recruited into the State Civil Service by the same administration.

Speaking at the swearing-in of eight newly appointed Permanent Secretaries at Obas’ Complex, Oke-Mosan, Abeokuta, Prince Dapo Abiodun said despite some flaws noted in the appointments and recruitments, his government has decided to be magnanimous as a people-centred administration not to be vindictive.

“It is important to make public that we received with great recommendations the report of the Review Committee on the Appointments and Recruitments made by the immediate past administration between February and May, 2019.

“Let me state that we very much appreciate the recommendations of the Review Committee, comprising of eminent retired Public Servants, that the appointments and Recruitments were fraught with non-adherence to the principles and laid-down traditions of the public service.

“But in line with our administration’s commitment to equity, fairness, Justice and inclusiveness, we will not engage in any action or policy that may be viewed as vendatta, rather, we will call on all to continue to put in their best for the service delivery to the people of Ogun State.

“Despite some flaws, we have upheld all the appointments of Permanent Secretaries made in the twilight of the last administration.”

Governor Abiodun cautioned against lobbying by civil servants to attain unmerited position, saying all the new permanent secretaries got their appointment on merit.

“I never met any of these new permanent secretaries before. I had no private discussion over who to chose. If you merit it under my watch, you will surely get your promotion as and when due”, he enthused.

The newly appointed Permanent Secretaries were chosen from the directors’ cadre in the state civil service. They include Ms Fadimitu Olusola, Engr. Ojetola Razak, Mr Sodeinde Olukunle and Sotubo Olurotimi. The rest are: Orekoya Bolaji, Lukan Jubril, Benson Lateef and Sorunke Dotun.
There was palpable tension among workers in Ogun State when in August last year Governor Abiodun set up a committee led by a former head of service, Chief Dipo Odulate to look into the appointment and promotion of approved by former Gov. Ibikunle Amosun between February 1 and May 28, 2019.

Recall that Amosun had in April appointed 18 permanent secretaries, barely a month to the end of his administration and also appointed over 1,000 workers into the state’s civil service, while he promoted 5,000 government workers.

But Abiodun, while inaugurating the committee at his Okemosan office Monday, said the feedback received by his administration on the appointment of some people into state’s public and civil services was unsatisfactory, hence the setting up of the committee.

He noted that the state public service, renowned for its professionalism, commitment and dedication, would be provided with the right type of leadership to enable it perform optimally.

However, one of the newly appointed Permanent Secretaries, Engr Razak Olabode Ojetola, said he was elated because he felt sidelined all this while, as he got his last promotion five years ago. He had also became cynical that he would make it to the position of permanent secretary because of perceived institutional encumbrances against “civil servants without connections”.

“Of those appointed last only one was my senior. Three were my colleagues on the same levele and the remaining 17 were my juniors. I am excited that people who knew nobody like me could make it to the pinnacle of their carreer. Thank God for Gov Dapo Abiodun”.

Ojetola said he was the first in his native Imasai, in Yewa North Local Government to become permanent secretary.

In the same vein, the Governor also directed that the Civil Service Commission and he Office of the Head of Service “to come up with modalities for the regularisation of those newly employed between the same period covered by the House ouse of Assembly resolutions with a view to normalising their appointments”.

He urged the new Permanent Secretaries to see their elevation as a call to greater service to the State, adding that they are to serve as standard bearers in the State public service.

“As the Accounting Officers and Administrative Heads, you are all enjoined to make probity your watchword, and be prudent in the management of both human and material resources under your care”, he advised.

Prince Abiodun called on them to interface between the administration, public service and the general public and come up with more initiatives that would lead to the successful implementation of the administration’s ‘Building Our Future Together agenda.

SEE HOW TB JOSHUA PROPHESIED THE IRAN ATTACK CRISIS IN 2011