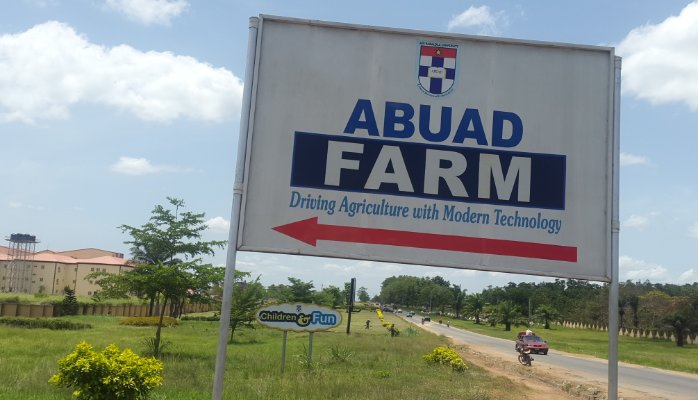 Whereas individuals across the globe see it as a conventional university, but the  Afe Babalola University, Ado Ekiti, ABUAD, has more to its conventional status.
At the moment, the university which sits on several hectares of land leads in the supply of agricultural produce to markets across the States of Nigeria through its ABUAD Farms.

The large farm is powered by an Independent Power Project, IPP of 2. 5 megawatts with a projection for 5 Megawatts.

It comprises crop and animal farming and accounts for major supplies of nutritious farm produce to the Nigerian markets ranging from fruits, vegetables, and different categories of meat.

Revealing his love for contributing to Nigeria’s drive for food sufficiency, Aare Afe Babalola, SAN, founder of the university, said during an interactive session with reporters that “I have passion for farming.

“We grew up in a local community where farming was the predominant engagement.
“I even thought I would inherit my father’s cutlasses and hoes because of my love for farming,” he said.
This passion, he maintained, provoked the huge investment into farming which has led to supplies to Lagos for onward distribution to other parts of Nigeria.

It would however be noted that at a time, Nigeria was reputed as an agricultural hub on the continent with regional governments accelerating developments through agricultural revenues.

But following the discovery of petroleum, Nigeria rapidly grew into a major food importing nation as the government neglected the agricultural sector since petroleum became a viable resource for economic development.

This situation quickly polarized the nation into high and low-income groups.
Since then, the country has been grabbling with challenges of inadequate food supply for its teeming population, a development that has been partly adduced as a major factor responsible for unending criminal activities in the system.

But to Aare Afe Babalola, SAN, the food deficit in Nigeria is a task that must be confronted with all vehemence. The ABUAD Farm is the designed vehicle to accomplishing this mission.

The 91 years old legal luminary, described as an uncommon gift to Ekiti State, Nigeria, and the whole world, is reputed as a leading employer of Labour as well as the biggest taxpayer to Ekiti State government through ABUAD.

SCOA Boss Commends Unity Bank, Others for Facilitating Supply of N15.5b worth of Trucks, Equipment to Julius Berger