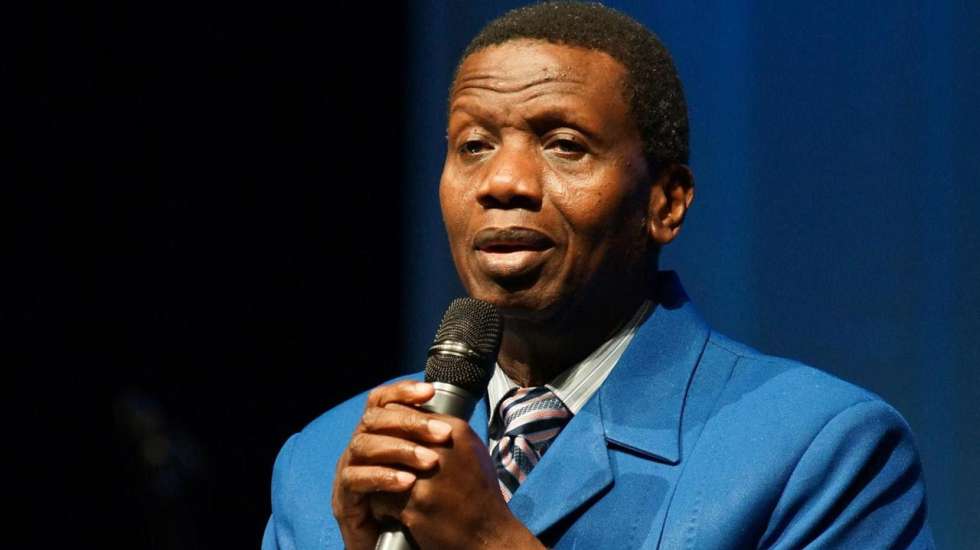 Enoch Adeboye, general overseer of the Redeemed Christian Church of God (RCCG), on Sunday morning led the congregation to thank God for saving the life of Vice-President Yemi Osinbajo in a helicopter crash in Kogi State yesterday.

He recalled that the word of prophecy came during the church’s Holy Ghost Service on Friday that no matter how hard the enemy would try there would be no mourning in our families this year.

“Would you please join me in thanking God that there is no mourning in our family this morning,” he said, inviting the congregation at the headquarters at the church at Ebute Metta, Lagos, and others who participated from various perishes of the church around the world to pray.

On Friday night, he had said: “The Lord has asked me to tell someone tonight that it doesn’t matter what the enemy might try there will be no mourning in your family this year.”

He had also called for prayers for the forthcoming general elections.

He urged people to cast their votes and ensure the votes are counted before they leave polling centres if the security situation permits.

Earlier, his wife, Folu, who is also a pastor of the church, had prayed for peaceful elections during a congregational prayer for all nations. RCCG has a visible presence in 198 countries.

Preaching a sermon on Isaiah 60:1 – 3, under the theme, “Swimming in Glory 2,” the General Overseer reiterated a message he preached in January, that one can only arise and shine in light or Jesus and not in Satan, who represents darkness.

When he made an altar call for people to come into light, hundreds responded in the old and new auditoriums at the Redemption Camp.

The night’s sermon dwelt on one word from the text, “Arise,” which he said is not an advice or plea but a command from God for us to move ahead from whatever position we are in.

“Arise materially means for loses to be restored,” he continued. “Arise to those who are dead spiritually is to come out of sinful life; arise from physical death, which symbolizes hopelessness is to refuse to lose hope in life.”

He illustrated this with the testimony of his uncle, who lost hope in life and planned to commit suicide but had an encounter with God during a church service.

He recalled: “There was this uncle of mine. He was very poor, so poor he could not afford decent clothing. One day he asked his wife to use her wrapper to make buba and soro with which he had planned what to do.

He had decided that enough was enough. So, he made up his mind he was going to die but that he was going to do so in style. He planned to go to church where he would sing and dance so much that everybody would notice him, and then come home and commit suicide so people would say, “Oh, we didn’t know he was celebrating his departure.”

Fortunately, my uncle was struck by the words of the preacher that fateful Sunday. When the preacher told of how Shedrack, Meshach and Abednego said, ‘We don’t know how God will deliver us but we know He will,’ my uncle changed his mind.

He said: “Aaah, I don’t how God can bring me out this storm, but I refuse to die.”

And the Prince of Peace spoke peace to his storm.

The day he was sharing his testimony, he had just purchased fourteen cars for his company.”

Continuing, he said arise to one who is sleeping means to wake up. He likened sleep to an invitation for the enemy to sow into one’s life; and could also mean unfulfilled dreams.

“Arise to someone sitting down means stand up. Sitting means resting too soon, or complacency or even retrogression.

“Arise to someone who is standing means jumping into action; keep moving or for one to take steps to fulfill their potentials.

He recalled how he started serving God with zeal soon as he gave his life to Christ. He said at the University of Lagos, where he was teacher, he started prayer and Bible studies in his office during break periods with a small group of his staff, but his office soon became so small that they had to move to a classroom.

He said the numbers continued to grow with such rapidity that the late Chike Obi, who was his head of department complained it was difficult to get typists to work for him during Adeboye’s prayer meetings.

“Arise to someone who is already running means begin to fly, which also means for the Holy Spirit to take one to a height in life never imagined, a height one would know only God could make possible.”

Illustrating this point, he said earlier in life, the best he could do was to fast for three hours, and when he saw a small girl testify that she got a miracle after dry-fasting for three days, he was amazed. But by the Grace of God he can now fast for 40 days without food.

Finally, he said arise to someone who is already flying means move from glory to glory. He cited the example of Peter, who became increasingly powerful, performing miracles.

The general overseer rounded up the sermon with congregational prayers with 10 prayer points he gave.

Much earlier youth pastors from among the children from the headquarters of the church preached to the large congregation.

Testimonies shared by some members of the church that night included miraculous healings, raising the dead, and children for the barren.

‘I was a victim of sexual assault’ – Uche Jombo