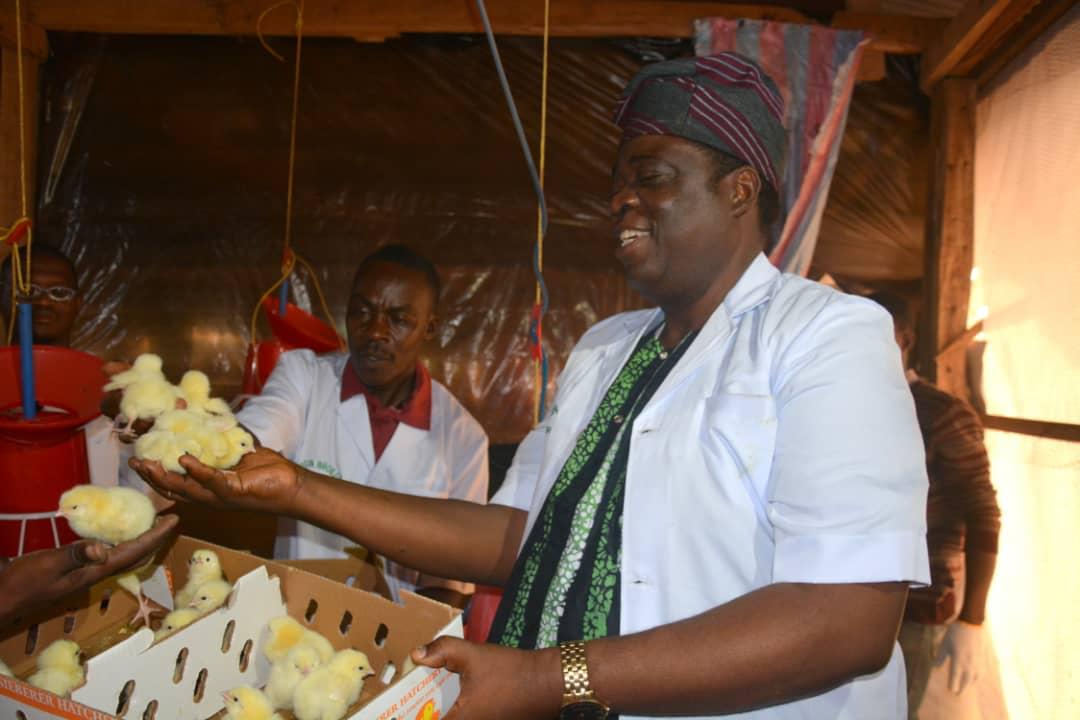 In its bid to increase food production and create employment opportunities for the teeming youths, the Ogun State Government has kicked off its Broiler Empowerment Program with the delivery of 54, 000 day old chicks for 54 beneficiaries today, 23 December, 2019.

The Special Adviser to the Governor on Agriculture, Dr. Adeola Odedina, who led a team from the Ministry of Agriculture, while taking stock of the broiler birds at the Odeda Training Farm Institute, in Odeda, noted that the empowerment is based on Public Private Partnership arrangement whereby the government provides necessary poultry infrastructure.

The team revealed that the Ministry of Agriculture is providing technical support for the project which was designed to meet the demand for poultry meat, reduce importation of frozen poultry products and on the other hand, create source of livelihood for young agripreneurs through cluster farming, noting that the expected output of between 216,000 to 324,000 broiler birds per annum will reduce importation of livestock products into the country, thereby increasing the State’s Internally Generated Revenue.

The leader of the team, Dr. Odedina said each beneficiary, within 42 days with 1,000 birds each, will earn a minimal profit of about ₦130,000per cycle of production, noting that there is the option of buy-back as off-takers like, Amobyn Farms Limited, will mop up all birds produced through a financing window by the Bank of Industry and Farmermoni Loan Program for Agriculture.

He further submitted that the success of the pilot phase will lead to replication in other two senatorial districts of the State, engaging over 500 agripreneurs with an estimated output of over 800,000 broiler birds per annum.

“The project is located at the Odeda Farm Institute, Eweje where the State Government had constructed six (6) poultry pens of 9,000 birds capacity, with an output of 54,000 broiler birds per round of 6 weeks. 54 beneficiaries were trained for the programme, while 46 of them have received their loan of ₦900, 000 each.
The expected minimum and maximum deliverable per annum from the project is 216, 000 birds (4rounds/annum) and 324,000 birds (6rounds /annum) respectively. The expected output of between 216,000 to 324,000 broiler birds per annum will reduce importation of livestock products in the country as it will also create over 150 direct and indirect jobs for youths in the state,” Odedina said.

At the end of a cycle of six weeks, it was revealed that the expected yield is about 115, 000kg (570tons/annum) of poultry meat which will address shortage of animal protein and drastically reduce the importation of frozen poultry products in the State and Nigeria at large.

WIN A TRIP TO DUBAI; GET CASH BACK FOR TRANSACTIONS WITH YOUR FIRSTBANK CARDS