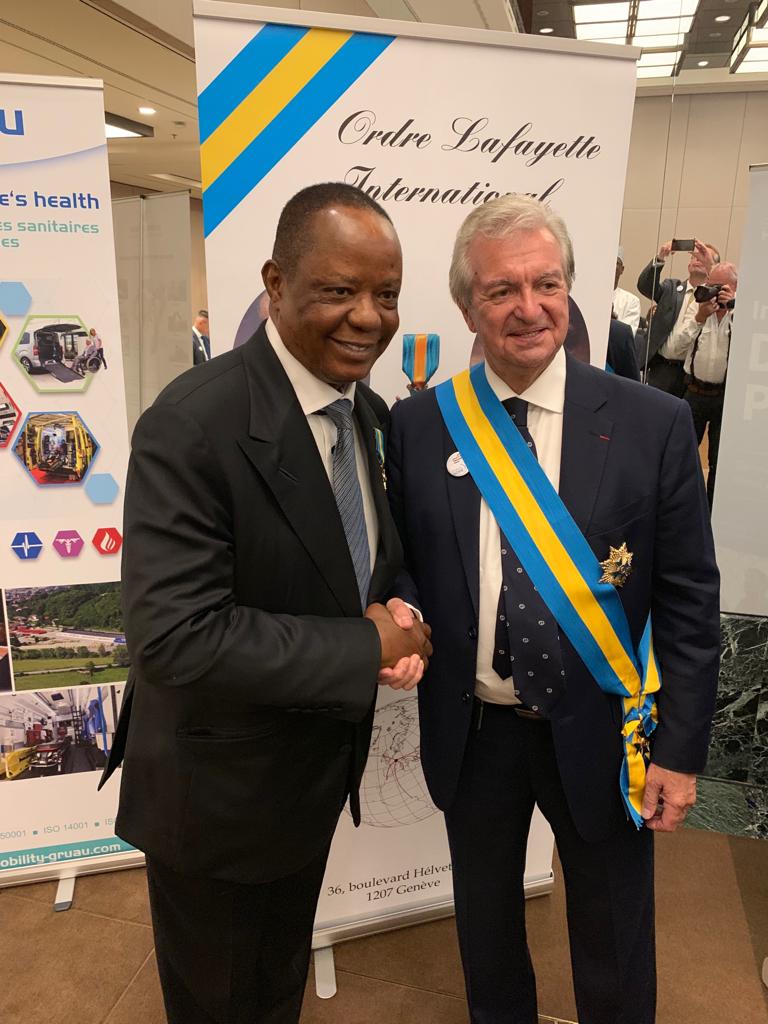 The Prestigious Lafayette Award at United Nations Day For Global Peace in Geneva has honoured the outstanding philanthropic and humanitarian efforts of Billionaire Businessman and CEO, Ocean Maritime Security Limited(OMS), Captain Idahosa Okunbo. He was recognised with the Order of Lafeyette Award, at the well attended award occasion in Geneva.

Known for his impact contributions in promoting, supporting and creating plausible initiatives for the sustenance of peace in Africa and across the globe, “Captain Hosa” as he is popularly called was presented with his prestigious award by His Excellency, Robert Blum, the President and Chairman of Order  of Lafeyette Awards.

The Occasion witnessed the presence of Diplomats from across the globe, economic and political Leaders and reputable personalities, who were in attendance to celebrate with one of their own. The international Lafeyette Award holds an interesting global history.

The Order of Lafayette is a patriotic, hereditary, nonpartisan, and fraternal organization established in New York City in 1958 by Colonel Hamilton Fish III (1888-1991), a former Congressman from New York and decorated veteran of the First World War. The Award was conceived to appreciate, support and encourage harmony, peace and conflict resolution across the world.

Amongst the distinguished achievements of of the Former Nigerian Pilot, Captain Idahosa, is the credible credentials of his offshore Asset Protection Company – OMS. Recently his company signed a Financing and Technical Services Agreement (FTSA) deal worth $876m with CMES-OMS Petroleum Development Company Ltd (CDPC) for the development of Oil Mining Lease (OML) 65, a Nigerian Petroleum Development Company Ltd, NPDC.

The historic agreement with his agency will open up production potentials of the OML 65 from 9,000 to 40,000 barrels per day. according to reports, this deal holds potential to explore, appraise and add reserves to base, noting that it would help the Federal Government toearn more than $6 billion in taxes and royalties. The project is guaranteed to engage indigenous companies in the industry for ancillary services, thereby providing direct and indirect job opportunities.

Also, Captain Hosa has an undying passion for hospitality which encouraged him to invest in the sector by establishing “Wells Carlton Hotel and Apartments” in the United States of America and also in Nigeria. His hopitality edifces are not only unique in structure but delightfully oustanding in services and executive/luxury comfort
Sent from my iPhone