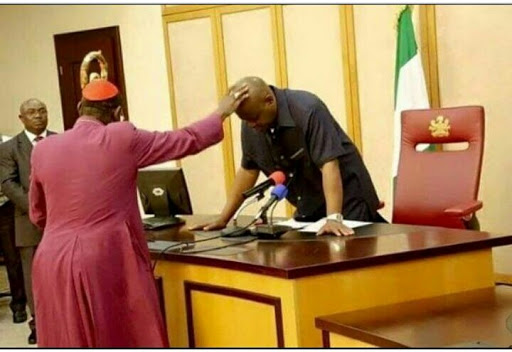 Rivers State Governor Nyesom Wike has called on Christians to troop out and vote during the forthcoming elections because their votes will make the difference.

He said that Christians should not believe the false propaganda that they cannot influence the outcome of political contests in the country.

“You must vote during the forthcoming elections. If you don’t vote and a bad leader emerges, you are part of those that brought that bad leadership.

“Your vote can make the difference. So go ahead and vote to effect a positive change”, he said.

He charged the church not to allow the children of God to be surrounded by those not supposed to be in charge of leadership.

The governor said that all Christians have witnessed first-hand the failures of the last four years of the Federal Government which have destroyed the economy, engendered unemployment, insecurity and dictatorial tendencies.

He said this was the opportunity to chart a new direction.

Wike said that all efforts of Christians to ensure the country makes progress would be crowned when they vote for their preferred choice.

He appealed to Christians to continue to pray against those plotting electoral violence and bloodshed in Rivers State.

Read Also: Wike crying wolves where there is none – Presidency
“None of my supporters should engage in political violence on my behalf. Nobody should use violence to support me”.

He said Christians should pray that God enables Judges to act right despite the intimidation and false propaganda by the APC Federal Government.

The Deeper Life Camp Ground Youth Choir Ministered to the congregation in a Special number where they declared that they are no longer slaves to sin and fear, but children of God.

He declared that all those making prophecies and preaching violence against Rivers State will witness the peaceful elections. He said all evil plans will fail.

2019 Election : “Nigeria will see the smoke, the darkness but it will fade away and there shall be peace in Nigeria”- Pro Joshua Iginla.