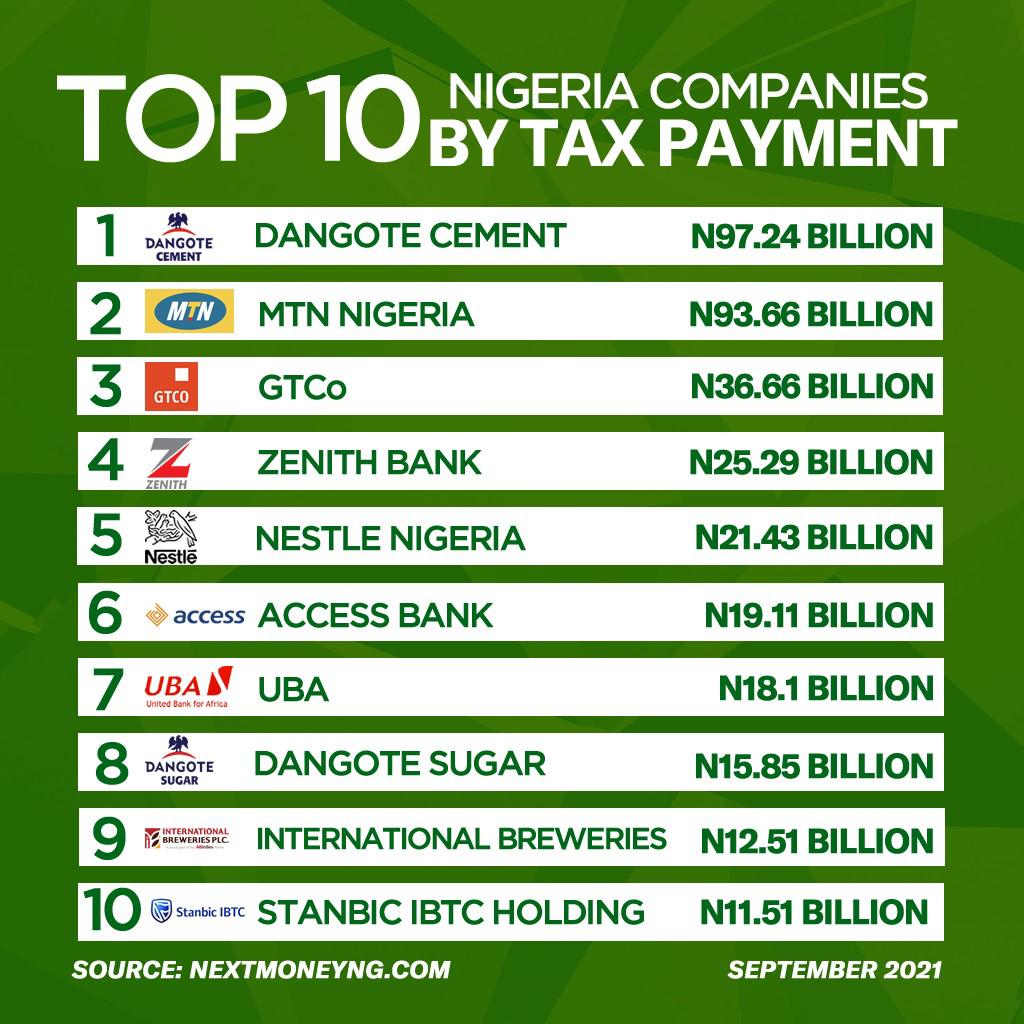 Dangote Cement Plc has emerged as the highest corporate income taxpayer and the biggest employer of labour in the country for the year 2020.

The foremost indigenous cement manufacturer came first among the top 100 elite companies listed on the Nigeria Exchange (NGX) posting into the coffer of the federal government a princely sum of N97.24billion in the year, while MTN Communication Nigeria Plc paid N93.6billion and Guaranty Trust Bank came third with an income tax of N36.66billion.

In the same breath, the Cement company with a presence in other African countries also emerged as the company with the highest number of employees with a total number of 16,199 staffers on its payroll as at the time of performance review.

In the performance analyses of 100 top elite corporate bodies on the Nigeria Exchange carried out by the reputable business magazine, “Next Money”, Dangote Cement was ranked as the most capitalized company in the country with N4,173.22billion.

Speaking on the analysis, publisher of Next Money, Mr Ray Echebiri said the performance index analysis of companies listed on the Exchange was carried out with a view to establishing the best-performing ones among the over 150 of them.

Echebiri, a renowned financial analyst, explained that the exercise is to provide existing and potential investors with information that they can rely on when they are taking investment decisions. “The first step we take in the analyses is to extract the Total Assets of each of the listed companies from their audited accounts.”

He said: “We sorted the total assets of the companies from the largest to the smallest and cut off at the 100th. We tagged the hundred companies that emerged from this exercise “Nigeria’s Top 100 Companies”. Any company that makes it to the corporate elite club of Nigeria’s Top 100 Companies is automatically a candidate for further ranking by Revenues, Profits, Market Capitalization, Number of Employees and Tax Payment.”

According to him, the rankings show how the listed companies stand on the corporate ladder with regard to the various performance indices. This edition of Nigeria’s Top 100 Companies covers the 2020 accounting year. It is, therefore, a performance analysis of companies listed on the Nigerian Exchange (NGX) based on their audited accounts for the 2020 reporting year.”

“In other words, the information used in the analyses are extracted from the annual reports and accounts of the various companies published in 2020 irrespective of whether a company’s year-end is March, June, September, December, or any other month in 2020.”

He explained that his group had no doubt that there are many private companies that would easily count among the top 100 companies in the country given their huge balance sheet size, the sizeable revenue they post yearly and the mouth-watering profits they declare. However, he added that they were not a part of the performance review and analyses because their audited accounts do not go through the kind of regulatory examination and approval that the listed companies face and, are, therefore not as believable as those of the publicly-held companies.

The construction giant, Julius Berger trailed Dangote Cement as the highest employer of labour, albeit far behind, with staff strength of 12,217 and the United Bank for Africa Plc which had a total of 10,824 people on its payroll.

Related Topics:Dangote CementMTN PAY HIGHEST INCOME TAX TO FG IN 2020
Up Next