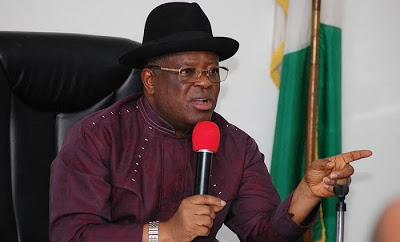 With the case of Evans, the notorious kidnap kingpin still ongoing, Governor David Umahi of Ebonyi State has suggested that ‘Death Penalty’ serves as the capital punishment for any arrested kidnapper in Nigeria. According to him, they should be publicly executed in other to serve as a deterrent to others.

Speaking in Abakaliki during an anti-corruption summit organized by the state government, Umahi said if such punishment is being implemented, it will help reduce the high rate of kidnapping in Nigeria.

“What these people do is worse than death, imagine kidnapping someone, blindfolding and chaining the person in one place for six months or more than that, it is worse than death and people who indulge in such deserve to be publicly executed to serve as a deterrent to others.”

Also speaking at the summit themed: ‘Institutionalization of Good Governance for Sustainable Development’, the chairman of the Independent Corrupt Practices and Other Related Offences Commission (ICPC) Ekpo Nta said good governance can never be achieved in a corrupt environment.

“Corruption thrives where all these processes are prevalent and corrupt persons seize these opportunities. ICPC relies heavily on promoting anti-corruption through robust prevention strategies.

“The United Nations Convention Against Corruption, UNAC strongly recommends that most of our strategies be channelled into prevention processes. This is the practice adopted by countries that have successfully reduced corrupt processes.”

This is how you dress for a job interview, and land an offer