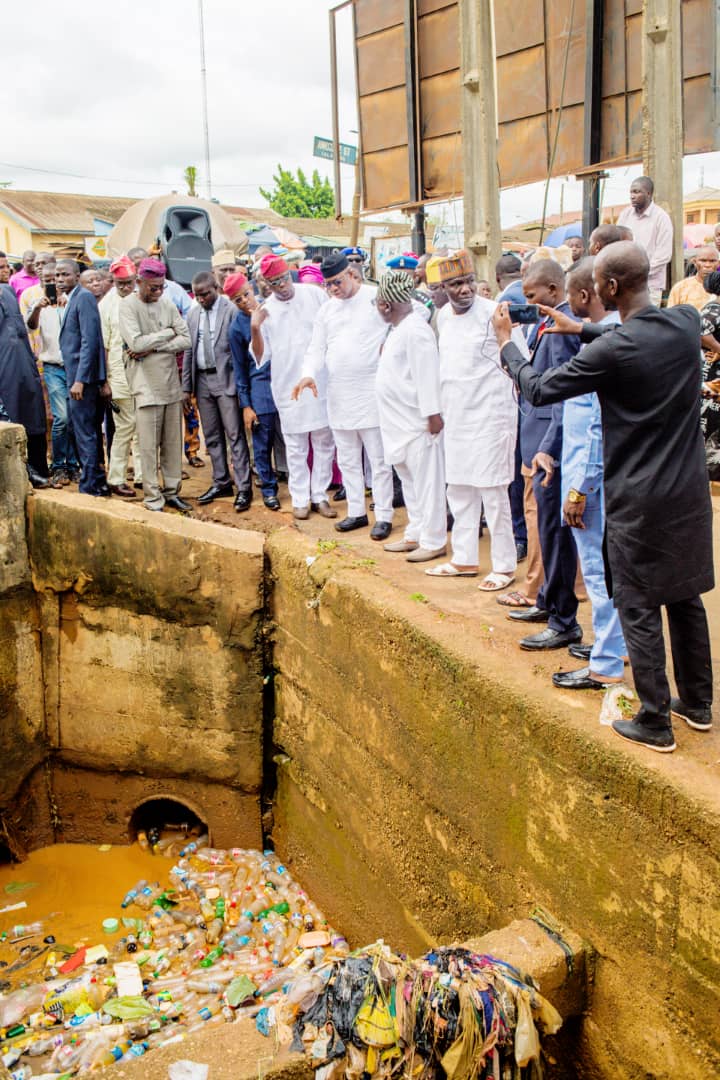 As part of efforts aimed at finding lasting solution to the perennial flooding affecting Ijebu -Ode and its environs, the Ogun State Governor, Prince Dapo Abiodun has appealed to residents to desist from dumping refuse in the drainage system.

The Governor who made this known while on an inspection tour of some parts of the town including Igbeba, Paramount, Moborode, Italapo, Degun and Imowo Ibadan roads, said he decided to come and see first hand what flood has done to the town, urging them to be patient with the state government in its quest to find lasting solution to the menace.

He said the state government would come up with a comprehensive plan that would help to address the problem, adding that the drains that serve as carriage would be re- designed to accommodate large volume of flood water.
” From what we have seen here, the biggest problem we have in Ijebu Ode is that the drains that crisscross the town are small concrete drains that are covered so they don’t allow for maintenance, they are very tiny, Ijebu-Ode will require very big open drains that can easily be serviced and maintained, so,we are going to have a comprehensive plan aimed at revolving these problems once and for all”, he said.

Governor Abiodun noted that he was only fulfilling the promise he made during his electioneering campaign not to forget the people if voted into office, adding that all areas with the issue of flood, would be attended to.

The Governor while sympathizing with those whose homes were overtaken by the flood, reiterated the need for the people to always clean the drainages close to them, saying this would allow for easy flow of water and save the roads, which were constructed with public fund, from being destroyed.

“One of the biggest complain we’ve had is that most of the homes are being flooded once it rains, at times, people can’t even get into their homes till past midnight, so, I want to urge you to desist from throwing dirt into the drainages, let us clear our drainages frequently, assist us in taking the state to the next level”, he said.