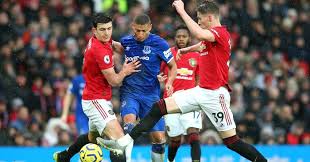 Of a truth the match between Everton and Manchester United promises to be explosive, Everton will not be with Brazilian international Richarlison who is suspended but French defender Lucas Digne is expected to return after a ban. After being dropped last Sunday, English goalkeeper Jordan Pickford is expected to be the man in between Everton’s sticks at home.

Under pressure, Solskjaer may field Jesse Lingard for the first time this season but centre-back Victor Lindelof remains a doubt.