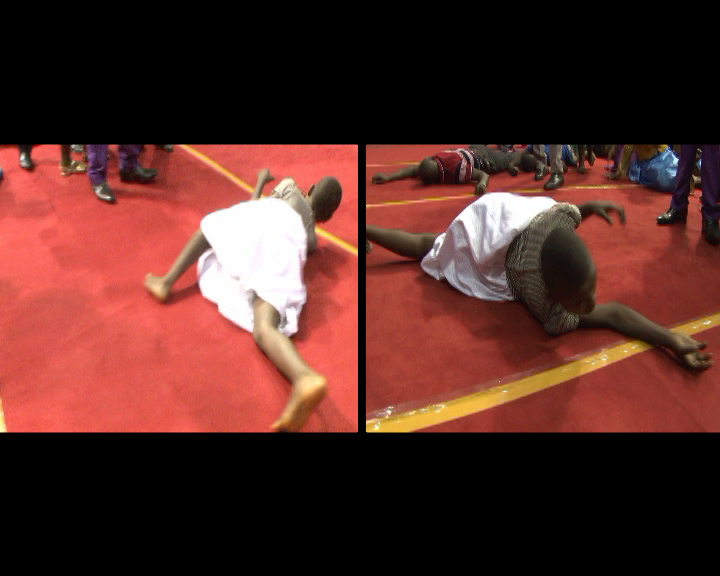 It’s Strange but true. A young girl of 11 born and bred in Cameroon turned into a Python ‘during the second day Apostolic Invasion of Bro Joshua Iginla in Cameroon.
The young girl, in full glare of several thousands who thronged the crusade, admitted she has over a million demons she operated with and that she is the strong man controlling the affairs of the country. According to her, she operated through the air, land and under the waters. She claimed they were responsible for the slow growth being experienced in Cameroon.
When Bro Iginla commanded her to manifest her true nature, she turned to Python’ and began gliding through the pathway.
Her father was equally called upon to confirm if she was her Daughter, she shocked the worshippers when she told the father she was over 250 years old spiritually and old enough to be his father.
After the deliverance by Bro Iginla, she regained her senses and with tears embraced her father.
It was a touching moment as the country of Cameroon stood in awe at the shocking confession of the girl who claimed responsibility for the slow growth of the country in the Commonwealth of Nations
It would be recalled that the nation of Cameroon stood still as Bro. Joshua Iginla stormed the country with Apostolic invasion on Tuesday, March 28th till Thursday, March 31st, 2015 inside the Palais De Sport, Yaiunde, Cameroon.
Interestingly, checks by us revealed that thousands besieged the venue to witness raw manifestion of Gods glory and power. The crusade which began at 4pm witnessed a surge of people who trooped in for a touch of God and they were not disappointed as they witnessed clear prophetic solutions to their problems and demonstration of power that eliminated their errors.
Aside the signs and wonders which characterised th first day of the crusade, a poor woman who needed both spiritual and physical solution was picked by the philanthropic clergy and giveb a huge sum of money ro alleviate her problems.
Furthermore, Bro. Iginla also predicted that he saw the hand of God upon Cameroon which would usher them in front of the nations through which God will move through Africa.