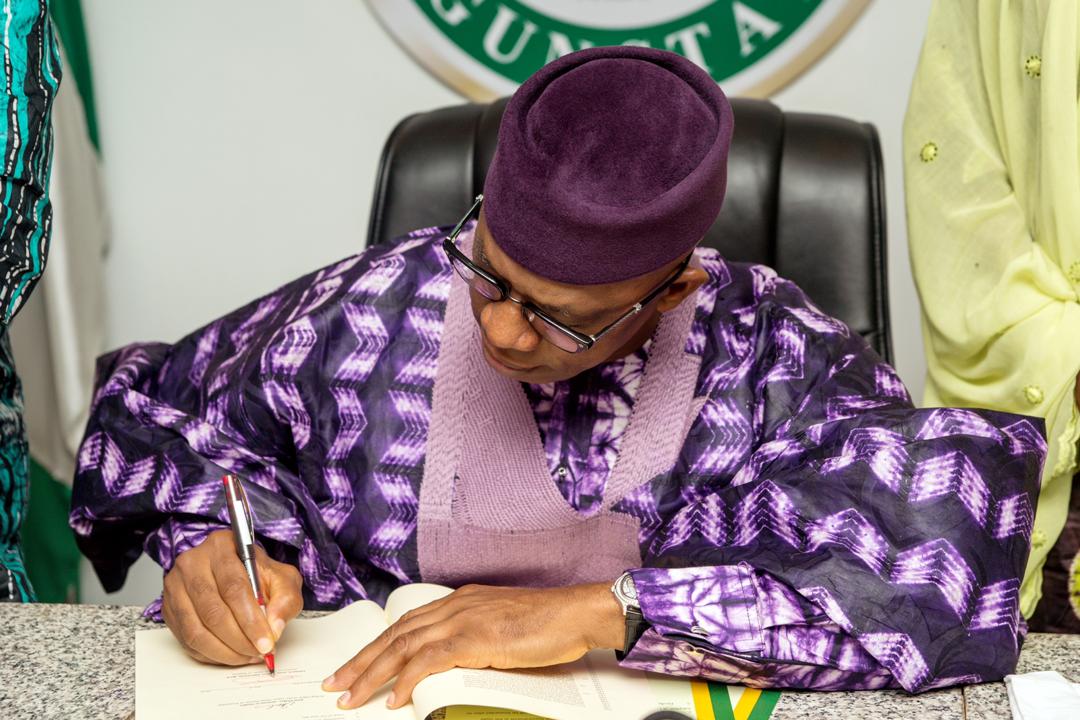 Ogun State Governor, Prince Dapo Abiodun, has signed into law a bill to have a one stop shop for investors wishing to establish their companies in Ogun State.

The bill was presented to him for assent by the leadership of the State House of Assembly Friday. It is known as Investment Promotion and Facilitation Agency of Ogun State, 2019

Governor Abiodun signed the Bills in the presence of the Speaker of the State House of Assembly, Hon.Olakunle Oluomo and all other members of the State Assembly at a meeting held at the Governor’s Office, Abeokuta.

With the signing of these Bills, the number of Bills passed by the State Assembly is now seven. The lawmakers had prebiously passed the amendment law concerning the Moshood Abiola Polytechnic, Abeokuta; the amended Security Trust Fund Law and the State Public Works Agency bill.

Gov. Abiodun lauded the lawmakers for passing the Bills which are in the interest of the people within the first 100days of the inauguration of the 9th Assembly.

The Governor said the lawmakers also did well by passing three other resolutions as he also appreciated them for approving his request for N1.5bn loan to facilitate the Anchor Borrowers’ Programme aimed at producing 40,000 agriprenuers, saying that it would enable the State participate actively in national economic growth.

He noted that agriculture was one of the sectors which his administration intended to revolutionise.

“The Anchor Borrowers’ Programme is one of the programmes under our agricultural sector which is one of the pillars of our vision. We are committed to revolutionise that sector. We see the sector as one that will ensure, apart from food security, employment opportunities for our unemployed youth.

“The Central Bank of Nigeria will provide the loan which will be used in assisting the outgrowers for clearing the land and other logistics. Our new agriprenuers would be provided free seedlings and paid allowances until their first harvest, while we supply the extension services,” he said.

While informing members of the State Legislature what his administration had been able to do in the last 100 days, Prince Abiodun said sectors like education, health, infrastructure, Information technology, security, agriculture and employment are on the front burner. He assured the legislators that all parts of the State would be touched in terms of development.

While pledging that his administration would be inclusive, the Governor appreciated the lawmakers for the Bills they brought forward and the resolutions, noting that it underscored their commitment to complement the Executive arm of Government.

“I join you in appreciating God for the 100 days of productive service to our dear State. Count yourselves lucky to be the representatives of our people. You are not better than others, but God has chosen you at this particular time.

“I really appreciate the relationship that we have. It has been mutually beneficial between the executive and the legislature,” he submitted.

Speaking earlier, the Speaker, Hon. Oluomo, said the passage of the Bills and resolutions was to mark their 100 days in office and to use the opportunity of signing the Bills by the Governor to hold a caucus meeting with him.

“We are marking our 100 days in office after inauguration. To benchmark it, we passed some Bills and resolutions and brought them for the Governor to sign.

“The other one is the Bill to establish the Ogun State Investment Promotion Agency which is a one-stop shop for ease of doing business in the State, while the last one is the House of Assembly Fund Management Law which will make the State Assembly accountable for every Kobo received from the Consolidated Account,” he explained.

Oluomo described the relationship between the Executive and the Legislature as cordial. He said apart from the four Bills, the lawmakers also passed resolutions, calling on the State Government to adopt the Beijing Affirmative Action by appointing thirty five percent of women into political offices, ten percent of youths and also the appointment of people with disabilities into political positions.

The Speaker said the Legislature would continue to accord other arms of government due respect, enjoining the people to continue supporting government to enjoy the benefits of democracy.