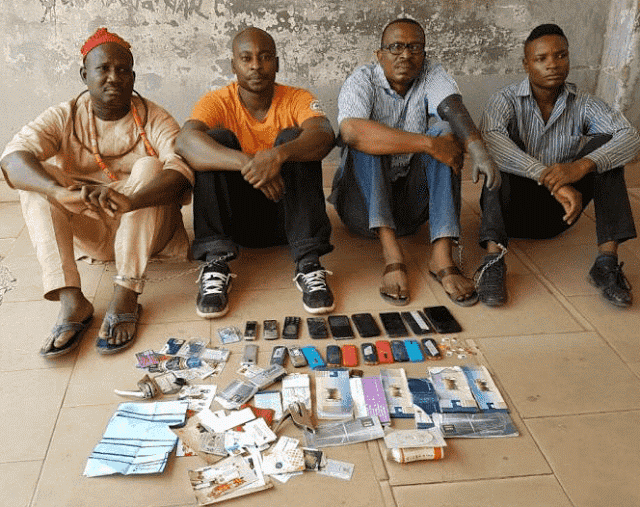 Some suspected fraudsters, who specialised in cloning phone numbers of ministers, politicians and aides to President Muhammadu Buhari, have been apprehended by the police.

Fourteen phones with SIM cards allegedly registered with names of top government officials were reportedly recovered from the suspects.

Among those impersonated by the syndicate, according to the police, are Chief of Staff to the President, Abba Kyari; the National Security Adviser, Babagana Moguno; the Minister of State for Petroleum Resources, Ibeh Kachukwu; and the Minister of Finance, Mrs. Kemi Adeosun.

They were also accused of impersonating a national leader of the All Progressives Congress, Asiwaju Bola Tinubu; the Senate President, Bukola Saraki; the Minister of Transport, Rotimi Amaechi; and the Secretary to the Government of the Federation, Babachir Lawal.

According to PUNCH Metro, operatives of the Inspector-General of Police, led by ACP Abba Kyari, trailed the syndicate to a hotel in Kaduna State on Tuesday, after receiving complaints from some victims.

A police source disclosed to one of Punch’s correspondents that the suspects impersonated Moguno to collect N13m from a Ghanaian, who wanted to get an oil block in Nigeria, and posed as Lawal to swindle one Nnamdi Udo of N4m under false pretences of helping him to get a federal appointment.

“They also posed as the Chief of Staff to the President and collected N2.5m from one Mr. Bishop, who was looking for a contract, and another N700,000 from one Shehu Dan Yahaya, who was seeking a federal appointment.

“They were arrested in a luxury hotel in Kaduna and had confessed to impersonating several prominent citizens,” the source adde

Another senior police officer disclosed to PUNCH Metro that the suspects confessed to have realised N20m in six months from their criminal activities.

He added that the mastermind of the gang was based in the United Kingdom. He said,

“Ogogo is their leader; but they mentioned one Prince Maurice, based in the UK, as their gang leader.  Fourteen different phones, several registered SIM cards, and a diary containing phone numbers of several top government officials, were recovered from the suspects.

“Ogogo further confessed that they had made over N20m from their criminal activities within the last six months.”

‘I was one of the best Aviation Ministers’ – Ex-Minister, Stella Oduah boasts