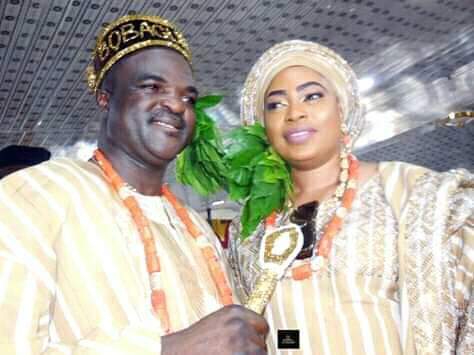 Alhaji Abass Akande, ace Yoruba musician and his wife, have been conferred with chieftancy titles by the Olowu of Kuta, Oba Hammeed Oyelude, in Osun state.
The News Agency of Nigeria(NAN), reports that, Akande, popularly known as Obesere was conferred as Agbaakin Of Yorubaland while his wife bagged the Yeyeluwa Agbaakin of Yorubaland on Wednesday.
In his remarks, Oyelude said Akande was found worthy in character and behaviour to be conferred with the title.Oyelude, who was a former Personal Assistant to a former Head of State, Gen.Ibrahim Babangida, said himself and Obesere, had been in good relationship for years.
The monarch, however, urged Obesere to use his chieftancy title for unity and advancement of Yorubaland.The highlight of the event was the presentation of instruments of office to Obesere and his wife.
In his response, Obesere thanked the monarch for the honour given him, with the conferment with a promise that he will use the position wisely.“Myself and wife gladly accept this title and we will use it wisely”, Obesere said.He said he would soon release an album to celebrate his new title, saying its title will be; ‘ classical honour’.