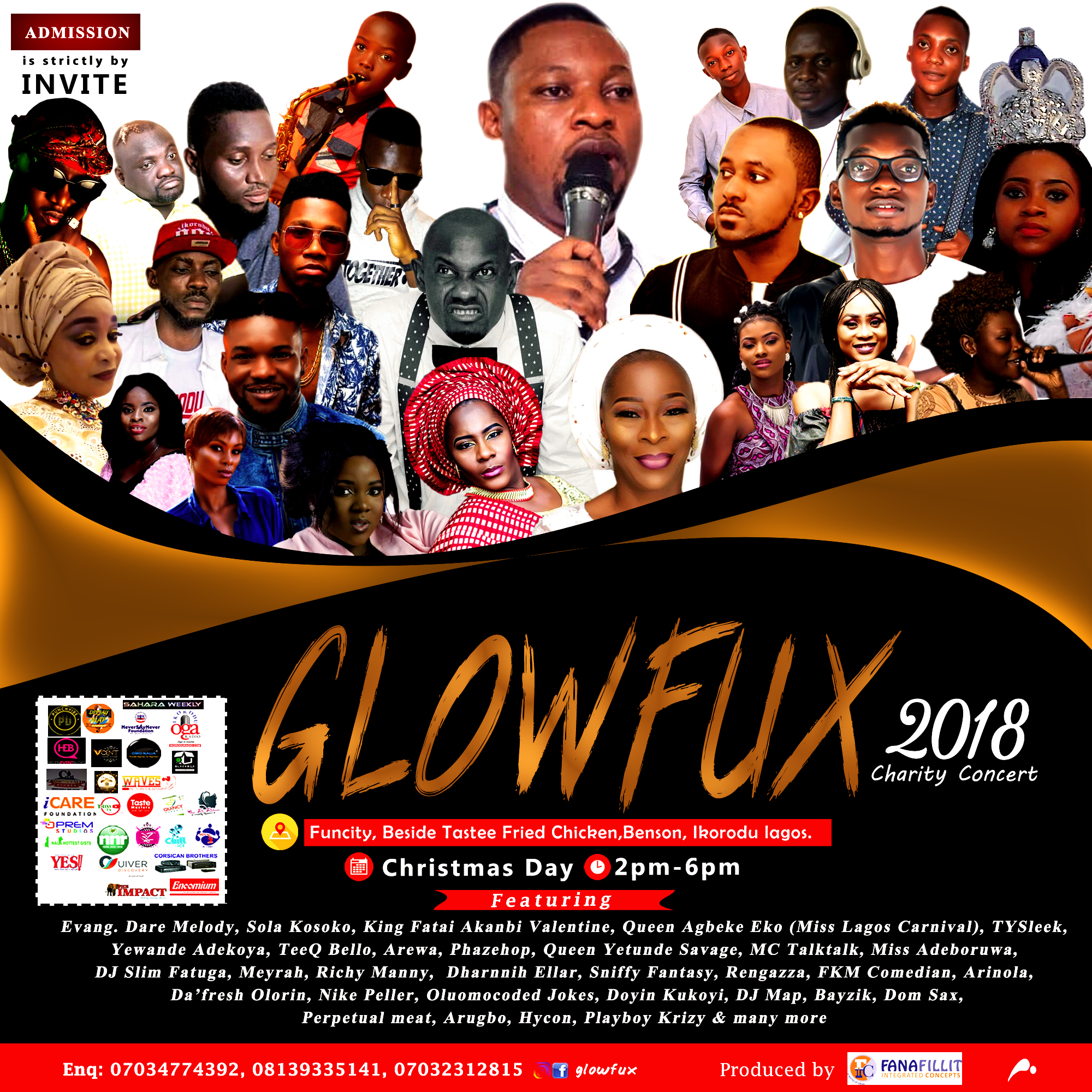 As D-day for the 3rd edition of the charity concert Giving Love With Fun 4 Xmas (GLOWFUX) draws closer, the organizers had disclosed to us introduction of new lofty ideas that according to them will be added value and recurrent decimal of the project GLOWFUX.

Speaking to our reporter on the new ideas, the Coordinator, GLOWFUX 2018, Miss Abosede Idiaka stated that notable amongst newly introduced ideas to the project GLOWFUX is the GLOWFUX Young Ambassadors Hall of Fame, an initiative designed for smart kids from age 5 to 17 with good parental care, quality circle of friends/schoolmates, family friends, neighbours etc. to serve as the project ambassadors within their immediate communities (Schools, homes, worship/religious centres, etc) to propagate the GLOWFUX vision.

In her words, the Coordinator explains that “we are kick-starting it with induction of some of the kids this year. It is going to remain an annual rite, that is, for each edition of GLOWFUX, we shall have new inductee added to the existing ambassadors. Anyone that is above age 17 among them will automatically join our pool of facilitators. The facilitators are adults from youthful age of 18 upward and they serve same roles (unofficially) as the ambassadors.”

Explaining further on the concept, the coordinator highlighted some of the roles and responsibilities of GLOWFUX Young Ambassadors which includes

To serve as ambassadors for GLOWFUX within their immediate environment (home, church, mosque, school, etc)

To leverage on their parent’s support and guidance to reach out to their family members, family friends, circle of friends/schoolmates, teachers, Pastors/Imam, neighbours etc and Spread the gospel of GLOWFUX, inviting them to attend the event on Christmas day with whatever they have as gifts for the orphanages

To participate in the campaign for GLOWFUX and any of its humanitarian projects as it would be duly outlined and announced to them (through their parents) whenever such occasion arises.

For each edition GLOWFUX, according to the organizers, a male and female will be awarded GLOWFUX Man & Woman of the year award respectively. Speaking on the process of selection of recipients of this award, the project Initiator, Mr. Olubode Mac. Oserinde posited that it is purely based on recommendation of GLOWFUX Board of Patrons.

The project GLOWFUX is an annual charity concert designed to bring together folks from several less privilege, motherless homes, correctional centres, etc and give them unique feel of the Christmas celebration through performances by entertainment practitioners drafted from different field of the entertainment industry.