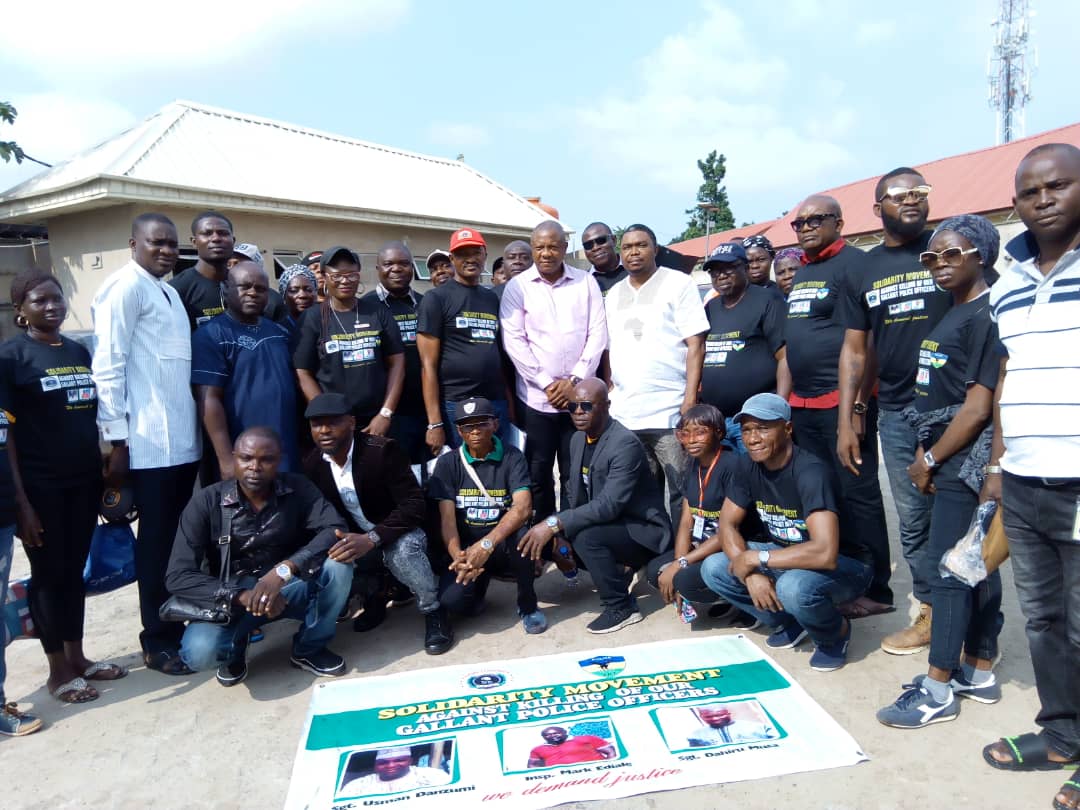 A group backing the Nigerian police force and other security agencies in crime fighting “Eagle Crime Awareness and prerention initiative “today pay solidarity movement to the office of the inspector General of Police Response Team (IRT) Lagos office annex over the recent killing of three of its men by soldiers in Taraba State.

The group led by its president Mr Samuel Eniola Adam started the solidarity with song with his members all on black top as early as 8am move from the Abule bus stop along bank Anthony ikeja chanting solidarity songs and move straight to the IRT annex office where they were received by the IRT co-ordinator Mr Phillip Rieninwa a Chief Supritendent of police (CSP).

According to the group, the killing of the three police who were on official duty remain cruel, barbaric and unacceptable in this democratic era, hence justice must be done that government should do everything possible to bring the perpetrators of the act to book.

He however thank the president and commander in Chief Mohammadu Buhari for setting up a presidential panel comprising all the security agencies to probe the distardly act.

He promised that the group will still pay condolence visit to the family of the slain officers.

He commended the effort of the commander (IRT) Abba Kyari a deputy commissioner of police DCP and his men for the kidnap kingpin Hamisu and other members of the gang that have been terrorising the country. “we are in solidarity with the IRT team led by DCP Abba Kyari may God protect and help them in discharging their duties.

Another member of the group Mr Ade Adeniran said the clash between the officers was unhealth as each of them have responsibility in serving the country.

He urged federal government to quickly organise a security summit airmed at bringing synergy among all security agencies in the country so that such incident will not repeat itself again.

According to him the condolence and solidarity visit shows that Nigerian are watching the role of the police in crime fighting across the country.

He noted that the visit by the will go long way to motivate and boost the morale of officers and men.

It could be recalled that last week operatives of the IRT who had arrested a kidnap kingpin was ambush in Taraba State by soldiers of the Nigerian Army checkpoint killing three policemen and escape the kidnapper.

But nemesis caught up with the kidnapper as he was later arrested in his hideout in Kano by a crack team of IRT led by the commander himself DCP Abba Kyari.