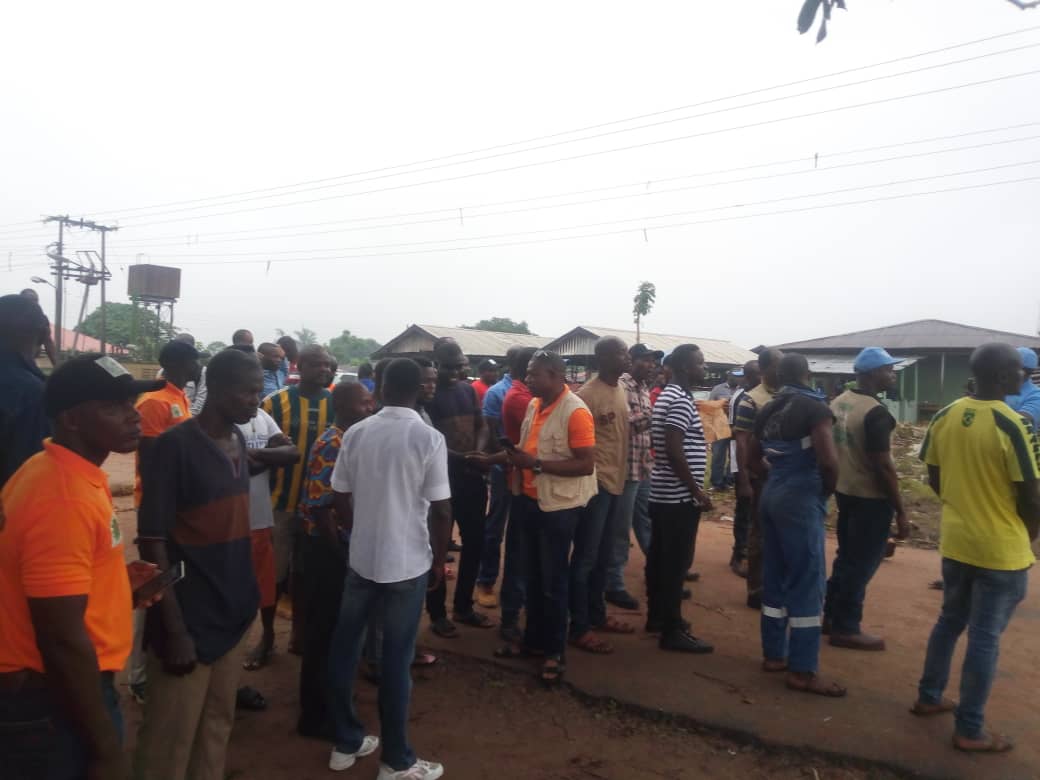 Nigerian Welders Association an affiliate of United Labour Congress ( NWA) Zone H Benin, and the Association of Filters Senior Staffs of Nigeria (FISSAN), yesterday, protested the marginalization meted on them by the Oilserv Company Ltd domiciled in Oben in Orhionmwon Local Government Area of Edo State.

The protest which lasted for several hours, led to the barricading of the main entrance leading to the company with heavy trucks and other items while chanting war songs and bearing placards with different inscriptions.

It took the intervention of the Nigeria Army to bring the situation under control that was almost degenerating into a free-for- all.

Addressing newsmen during the protest at the community, the chairman, NWA, Mr. Idemudia Osagiaro, said they decided to resort to protest due to the violation of the agreement reached with the company and the continuous marginalization of their profession by the said company.

Osagiaro said the non inclusion of their services by the firm whenever the need arises negated the policies and programs of the present administration of the federal government of Nigeria to encourage indigenous and local content service.

“We are professionals and also from this community every job they do here is our profession. We wonder why they will bring people from other states to do our jobs”.

“This is not the first time a company will be building a gas plant in our community.

“Oben is the community that produces the highest quantity of gas in the country.

“SEPLAT build a gas plant here and engaged our services with good agreement.

“We wonder why Oilserv will abandon us and go and bring people from other states to do the job we do as professionals”, he said.

The chairman said series of letters have been written to the firm by the association to have a change of attitude but all was to non avail.

Some of the letters read thus “we the above name, Nigerian Welders Association Benin Zone are using this medium to inform your management that any fabricated pipe, pipe support, pipe racks, off skid support, pipe shoes or anything related to our profession, which are fabricated in or outside the state or country without involving the Host Community (Oben) workers, and Edo state zonal office of Nigeria Welders Association of Nigeria (NWA), will not be allowed to enter or installed in Oben Community Orhionmwon local government area of Edo state”,

Also speaking, chairman, Filters Senior Staffs of Nigeria (FISSAN), Mr. Omoregie Sylvester, Orhionmwon Central Unit, however used the medium to appeal to federal government, state, local and the palace of the Oba of Benin to come to their rescue as they promised to used soldiers to brutalise them.

Meanwhile all efforts to reached the management of Oilserv company were unsuccessful as they insist journalists should come to Port-hacourt for their comments.