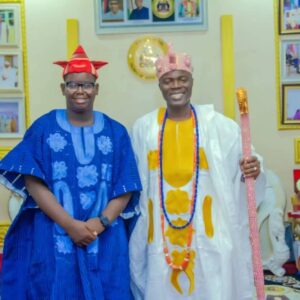 Being able to have trust and confidence in a friend is one of the most important requirements of a strong relationship. For one of Yoruba foremost traditional rulers, the Olowu of Owu Kuta, His Royal Majesty Oba Hameed Adekunle Oyelude Makama, each time he receives a message of love and trust from a friend, it gives him one of the best feelings ever.

On Christmas day 2021, the respected monarch received this assurance of trust and loyalty from an unusual quarter. The children of a former Nigerian Army chief, retired Lieutenant-General Tukur Yusuf Buratai, now the Ambassador to the Republic of Benin, arrived at the Olowu’s palace in the quiet town of Kuta, Osun State, for the holiday.

Oba Oyelude does not hide the fact that he is friend to the military. His friendship with the military has its root in the 1990s when he was one of the right hand aides to the former military president, retired General Ibrahim Badamasi Babangida. It is the trust built over the years that helped the monarch to better express his fondness for the Army when his paths crossed that of Ambassador Yusuf Buratai.

Asked how he felt receiving the family members of Ambassador Buratai for festivity with little company of security guards given the current security situation in the country, the elated Owu Kuta monarch posited that, “it shows trust”, adding that, “when you have trust in a relationship, like the type he shares with Ambassador Buratai family, your friend comes to mind more when he is away.”

Indeed, for Ambassador Buratai’s family, it is homecoming in Owu Kuta as they were not only treated like royalty but also accorded the honour due to bonafide Owu Kuta kindred.

See more pictures from the events below:

The Ooni and his beautiful queen By Tunde Odesola