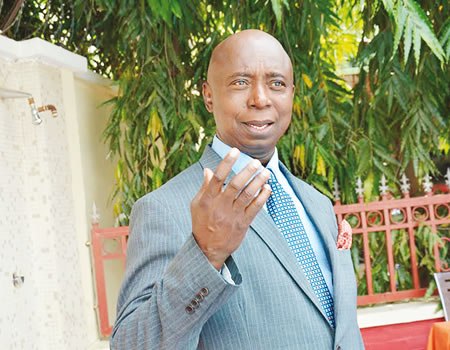 The social media especially Facebook had been suffused in recent times with a tale of two themes. One a personality, PRINCE NED NWOKO and second a community, IDUMUJE-UGBOKO.

The tone of the narrative on Ned Nwoko and Idumuje-Ugboko ( the land of his birth) had followed a pattern – hostile, bitter and hateful.

The diatribe mostly by Ned Nwoko’s fellow tribesman (Azuka Jebose) from Onicha-Ugbo has been spewed for too long now with repetitive dissonance, tasteless in intent and meaningless in value.

The Ned Nwoko Media and Communication Directorate has reached its wit’s end watching a boring circus of empty song jarring the ears morning, afternoon and night – every day! Social media is tired. We are tired of tales.

By strategy and orientation, we are totally averse to rebutting aggressive charges. Reason that a comeback to an insult ( no matter how festering ) is not often the best elixir for a riposte for obvious purposes.

By Ned Nwoko’s radiant standing, he can never descend to the gutter. A man with so much glory and honour pampered by amazing grace can only walk in fanciful measured steps. No decent man will lace his shoes to run after nothing. It makes no sense to dignify nonentity. To do such would be infra dig. So let it be with Ned Nwoko and his minuscule maligners.

But for social courtesy, it is necessary to make particular clarifications.

Contrary to the story of chroniclers of falsehood, Ned Nwoko is not land grabbing Idumuje-Ugboko Prince. He stands today at the centre stage of endless ovation with the development of the first sports university ever in sub Saharan Africa, STARS University located in his home town. A multi billion Naira timeless legacy that would from generation to generation celebrate the mythic destiny of one man interlaced with the good fortune of a people – Anioma and far afield.

It is on record as a proven fact that all Idumuje-Ugboko farmers had been compensated by Hon. Prince Ned Nwoko of which over 200 million Naira was spent for compensation over the land acquired for the building of the university and an international golf course.

The irony of the 90 hectares granted with C of O is that it is the same land that various Onitcha-Ugbo families claim belong them and the Ned Nwoko foundation has paid these families close to 200 million Naira just for peace sake.

The idea for the settlement was to stop them from farming at the golf course land, within the STARS university.

Though most of the farmers are not the original owners of the land as they are itinerant crop cultivators and strangers farming on Idumuje-Ugboko ancestral land, they were paid compensation for peace and harmony, sequel to a request by the then Obi of the kingdom, the late Obi Albert Okwuwadiegwu Nwoko.

It bears emphasis to state that all documents relating to the ownership of the land where the STARS university is located, were duly and legally acquired by Hon . Prince Ned Nwoko.

No one has been forcibly dispossessed. So the tale of a 92 year woman allegedly locked out of her farmland is false. An old story fabricated in futility to hoodwink.

It is worthy of note that in deference to the implementation of the peace agreement brokered by the Obi of Owa kingdom, HRM Emmanuel Efeizomor and other royal fathers in Anioma area, to withdraw all cases in court including the land dispute, Prince Ned Nwoko has fully complied.

On criminal murders in Idumuje-Ugboko, it is silly slander to link Ned Nwoko. He has no hand in such gory crudity.

There was the incident of one Ugochukwu Nkenchor and another Onicha-Ugbo boy who were fighting over a farmland with cult groups resulting in Ugo’s tragic death. The farmland in dispute is far from the STARS University land. The murder case is with the police and of no interest to Prince Ned Nwoko or his family.

The other case was on Sunday 13th October 2019 involving one Ogogo Blessing, who came into Mount Ned Nwoko’s Resort Idumuje-Ugboko with his girlfriend to swim in the pool under rain unknown to the managers of the tourist centre. He eventually drowned. He did not use the life guard and the security couldn’t have helped him under that circumstance.

The Mount Ned Nwoko Resort is a public place where people from all walks of life come in for functions and tourism. The management has been extremely careful in security arrangements.

Blessing’s case was like a man who doesn’t know how to drive getting on the wheels of a car without permission and crashes the car killing himself. It was practically a suicide mission. Who do you blame?

It is important to note that Prince Ned Nwoko has shown empathy to the family of the deceased led by one Ifeanyi Ogogo, a Pastor with the Mountain of Fire Ministry, Issele Uku. Only a man with innate fellow-feeling over human grief he never caused could have been this humane. How is Ned Nwoko a murderer?

The infamous mayhem in Idumuje-Ugboko relating to lingering kingship tussle was never at any time plotted by Ned Nwoko. As a man of peace with refined temperament, his conducts are above board. That clearly explains why he has been demanding for SOCIAL JUSTICE over the bloody infractions in his beloved community as a conscientious son of the land.

He believes in rule of law and not propaganda. That those who organized and funded the terror in Idumuje-Ugboko as well as their foot soldiers must be tried as charged. He supports their prosecution as well as the trial of any person that runs foul of the laws of the land. They are being tried for the crimes committed against others. The consequences of not being punished is rather imagined. Deterrence is essential. He asks for no more, no less.

That is all the blackmail and frenzied attacks on his reputation.
All the distractions and lies against him are from people who loath his fortune and good nature.

The Nwoko royal family of Idumuje-Ugboko knows Prince Ned Nwoko. They appreciate what he is building for humanity. They know his background and understand that he will be the last person to use force or violence on anyone. Too sophisticated for that. But they also know that he is not a push over. No one can revoke a land allocated for a noble cause as a university. It will not happen!

We dare say that the vilification of Ned Nwoko will remain a useless vice.

A million traducers and more can never achieve what Prince Ned Nwoko has garnered in life. Thanks to grit and divine grace. He has over 500 students on his scholarships both in Nigeria and abroad. He caused the Asaba Benin road to be dualized. He not only got NDDC to do the Onicha-Ugbo-Idumuje-Ugboko-Ewohimi road but also spent N100 million to maintain the road. He ended Nigeria‘s economic recession. He helped to settle Paris and London club loans for states and local governments across the country. Millions of people were paid or employed because of the refunds the governments received. He has put Idumuje-Ugboko on the world map with the STARS university.

On social media, the defamers song of sorrow is that Ned Nwoko is buying land in his village with his money! Most of them are destitute. They cannot afford to build a house in their homestead. Homeless. None can even visit home. They are neither here nor there. Rudderless without roots like Kenyan folklorist Gerald Angira‘s lost “child of no world “.

LIES have no legs. Crippled by retrogression. Truths beget motion. Blooming glory and life. Here is the trajectory of Ned Nwoko. Light is his lot.

Now to his disparagers! Drum your loudest beat to denigrate Ned. Conjure the most grotesque adjective to label him, mimic Goebbels propaganda to paint him, deploy your worst. Keep gloating. You are just pining in self pain.
You are wasting your time.

We are tired of your sick tales if you are not tired.

The name will not change. Ned is Ned!

He rings a long bell that sounds world wide. He is a Prince of Idumuje- Ugboko. He is a billionaire. He is a philanthropist, He is an international lawyer. He is the founder of one of Africa’s most prestigious universities. The first black African explorer to visit the South Pole, Antarctica on continental anti-Malaria mission. The famous husband of Nollywood Star, Regina Daniels.

Amotekun: Are the Yoruba States in Nigeria asking for sovereignty?