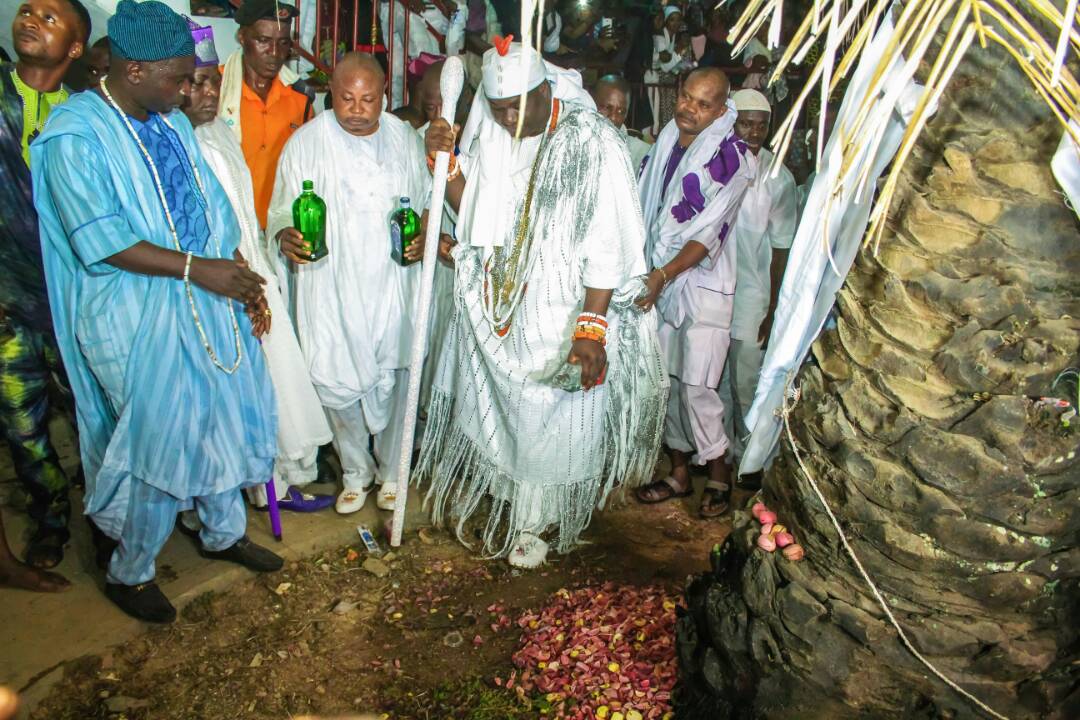 The Odun-Ifa festival of lle-Ife is an international festival usually referred to as the World Ifa Day. It is so-called due to the fact that; people from different countries of the world, whose origin have been traced to the foremost Oduduwa race, travel from all over the world to Ile-Ife for the event.

The event marks the beginning of a new calendar year for the African Traditional Believers. The festival which runs for a period of two weeks was at its peak on 2 June 2018, when the mammoth crowd joined Ooni to visit Oke-Itase. This is to pray at the bosom of the first palm tree and also to hear the voice of God (Ifa Agbaye).

The Ifa Agbaye for this year as pronounced at the end of Odun Ifa today is as follows:

The Odù Ifá of the year 2018/2019 from Òkè-Ìtaṣẹ̀, Ilé-Ifẹ̀ is Ìrẹtẹ̀ìká. It came with Ire aya, fortune of spouse. Ẹbọ is recommended. Happy New Ifá/Òrìṣà/Yorùbá Calendar Year. May we witness many happy new returns. Ọdún á yabo o.

An average individual like me, with little or no knowledge of the concept of Ifa may assume that, it is just a form of proverbial recitals for human guidance. Prof. Wole Soyinka posits similar idea in an interview with Ulli Beer (Tempo, 6th Nov. 1997 p.8) where he stated as follows:

“It is a very curious phenomenon that Yoruba scholars are reluctant to come to terms with Yoruba (lfa) religion. The worst part of it is that those fellows who speak about “false consciousness” … are all totally preconditioned. Even when they are trying to ‘be objective about ‘African religion’ in general, they are totally incapable of relating to it. They say it is a contemporary world. What use is Traditional Religion today? … And I feel tempted to say to them what use is a system of beliefs like Islam or Christianity in the contemporary world? And they cannot see that they have totally failed to make the leap: to take Yoruba (Ifa) religion on the same level as any system of belief in the world; that they are committing a serious scholarship lapse. In other words they are totally brainwashed by what I call these “elaborate structures superstition”

On this note, I deem it fit to explain the concept of Ifa as a religion, the nature of Orunmila and the significance of the World Ifa Day as explained to me by my king, the Arole Oduduwa.

I enquired his H.I.M with respect to the relationship between Orunmila and Ifa and this is what he said:

“Ifa is just like every other religion created by God. While Orunmila, who had lived in the form of what is today known Obi (kolanut) before his earthly existence is the forerunner and interpreter of the divine message of Olodumare while the message is Ifa. Orunmila is next to Olodumare in terms of fore-knowledge, wisdom and spiritual salvation. He knows the secret of man’s being; due to the fact that, he was with Olodumare at creation.”

This corroborates the words of Prof. Idowu Odeyemi in his lecture; what is Ifa? Where he stated as follows:

“Orunmila, in order to make access to the retrieval of the Divine Message (Ifa) easy, devised the computer compatible binary coding system, thousands of years before the emergence of computer consciousness in so-called modern man! So, Ifa is preserved in binary coded format and is output Parable – Format.

Ifa is coded within 256 Odus or Corpus, each Odu representing an esoteric pigeonhole, itself divisible into 256 sub-holes. Within each of the 256 Odus, there are 1,680 Sacred Verses all presented in Parable – Format. Thus, the body of Ifa consists of 430,080 messages for mankind.”

H.I.M agreed to the composition of the Odu Ifa as a replica of today’s binary coding system which had existed before the advent of computerisation. I was bemused by the Oonirisa,when H.I.M made the assertion that Ifa and opele  as used by the Ifa priest can be traced to the Bible. Kabiyesi asked me to research the meaning of Urim, Thummin and Ephod; this is what I found…….

In the Hebrew Bible, Urim and Thummin are connected with divination, a set of two objects used by the high priest to answer a question or reveal the will of God (see Exodus 28:30), while Ephod  in ancient Israel is a sleeveless garment worn by Jewish priest to which Urim and Thummin is attached. Kabiyesi explained that the usage of these three items started in Ile-Ife and still in use by Ifa worshippers to date.

Kabiyesi further stated as follows while explaining the significance of odun Ifa in the comment below;

“I must acknowledge that God is great and He cares so much for Ile-Ife. Hence, we live and breathe in His mystery. Once every year during the Ifa festival, people come from far and near, all over the world; to hear the ‘Voice of God’  at the festival.  In the course of the festival of the voice of God, Olodumare often show himself in a mysterious way to prove that He is present and available to answer prayers of those who believe.

The congregation of people are expected to pray on their choice of kolanut (a symbol and representation of Orunmila) and dropped  at the bosom of  the first Palm tree in Ile-Ife. Once this is done, people disperse until the following morning. You will be amazed at the discovery; most, if not all the kolanut dropped at the palm tree are nowhere to be found.

Let’s just say, the offering has been accepted by Olodumare and physical manifestation shall follow. Behold, the God of old is real and still resides in Ile-Ife; iroyin ko to af’ojuba – seeing is believing.”

That was awesome interview from the number 1 custodian of the Oduduwa race. That said, Odun Ifa still continues as we await the Araba Agbaye to visit the Ile-Odua before the festival comes to an end.

In the meantime, please see for yourself the before/after video of the kolanuts dropped at the bosom of the palm tree as well as pictures at Oke-Itase.

​10 Things to Remember When You Have a Hard Time