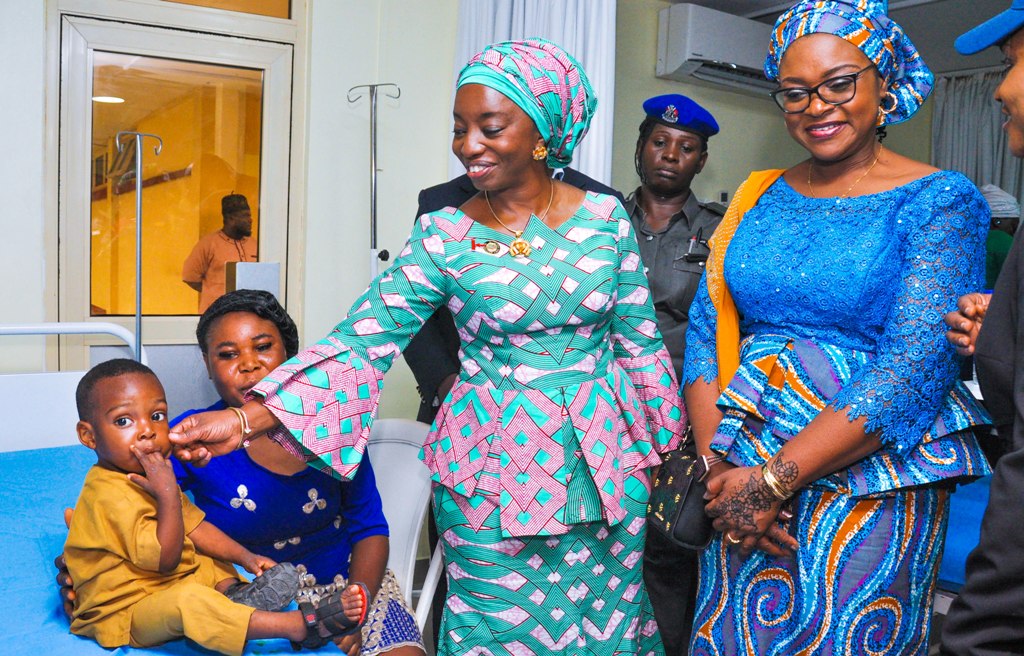 It was all excitement at the Lagos-owned healthcare facilities on the mainland and Island on Friday, when the First Lady, Dr. Ibijoke Sanwo-Olu, made surprise appearance at five hospitals to assess the progress of the ongoing Healthy Bee programme co-sponsored by the Lagos State Government.

The free medical initiative is aimed at combating organ impairment and life-threatening ailments in children.

It was organised in collaboration with Babajide Olusola Sanwo-Olu, Kadiri Obafemi Hamzat (BOSKOH) Healthcare Mission International, a non-governmental organisation (NGO), which provided the personnel and technical service support for the project.

The medical initiative is component of the Governor Babajide Sanwo-Olu administration’s development agenda to reposition healthcare and give disadvantaged children access to quality medical care.

The First Lady’s visit excited the beneficiaries whose children went through free medical procedures to heal them of various conditions.

At 10am, Dr. Sanwo-Olu breezed into Massey Street Children Hospital on the Lagos Island, where she observed medical procedures being administered on infant patients suffering dental disorder.

The First Lady moved to Lagos Island General Hospital in Marina, where she visited children operated for different degrees of hernia.

Speaking after the tour of the hospitals, the First Lady said she was delighted to know thousands of residents had benefited since the free surgeries started.

She expressed optimism that the effort would lead to improvement in healthcare delivery in the State, assuring that the present administration would spare no effort to give deserved attention to health sector, with the view to scaling up healthcare services to the people.

She said: “I see hope for improvement in the health sector after my visit to five hospitals today to observe what has been done in the past few weeks.

“I started with Massey Street Children’s Hospital. I was impressed with the children that I saw there and the Dental Surgeries that have been done, with some still being attended to. The turn out was impressive and the people appreciated what we have done. All the surgeries were being done free of charge.

“I also attended the General Hospital Lagos to see the children that had Orthopedic surgeries and the mothers were also very grateful for what has happened there, as well as Onikan Health Centre. I was also at General Hospital in Gbagada, and finally General Hospital Orile-Agege.”

The First Lady specifically appreciated all the volunteers working to ensure the success of the free health mission, assuring that the project would not be a one-off exercise.

She said: “I am here now in Orile-Agege and I can see the smiles on the faces of the people. I must say I am impressed that even during public holidays, our medical personnel as well as the rest of the management team worked together to ensure that this was a successful programme and that shows that we can do it; this shows that there is hope for Lagos; and there is hope for our citizens.”

Giving a breakdown of the exercise, Executive Director of BOSKOH Healthcare Mission International, Mrs Nike Osai said a total of 81 pediatric patients were referred for various cases, including dental problems and chronic medical conditions, with 67 dental extractions carried out at Massey Street Children’s Hospital in Lagos Island, while over 300 patients were screened at General Hospital in Lagos, with a total of 94 surgeries so far carried out.

At Onikan Health Centre, Osai said a total of 193 patients were registered, out of which 75 surgeries have so far been carried out, with many still ongoing and some slated for surgeries, all free of charge.

In General Hospitals, Gbagada and Orile Agege respectively, Osai said about 120 pediatric surgeries had been done, while 88 eye surgeries were successfully carried out for adults ranging from ages 41 and 90 just within five days.

In all the centres across the State, Osai said thousands of residents have so far benefited, saying that the essence of the project was to give back to humanity and help people in the communities across the State that needed the surgeries and healthcare services.