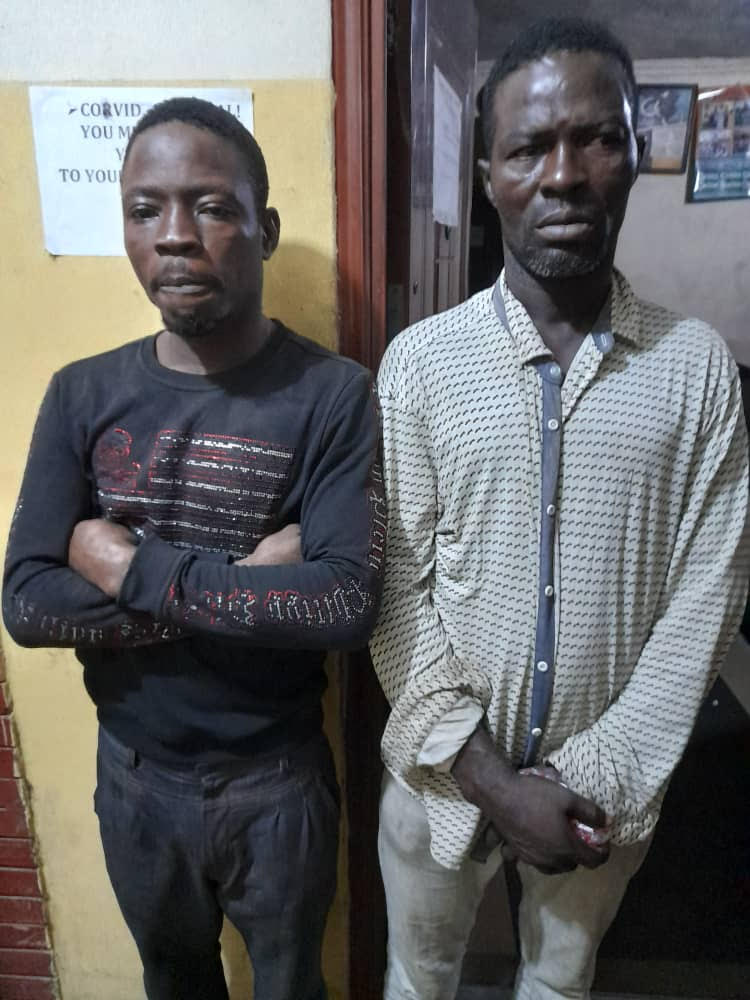 Lagos Police Pounce On Rail Tracks Vandals, Traffic Robbers, Arrest Suspects
The Police operatives attached to Satellite and Aguda Divisions of the command have arrested two suspected traffic robbers each at different locations in their areas.
The Satellite Division arrested two suspected traffic-armed robbers along Agboju-Alakija on Lagos-Badagry Expressway on 19th February 2021 at 1035pm. The two suspects, 26  years old Solomon Ayuba and 20 years old Manase David, were caught in the act by the police when they were attacking unsuspecting commuters in the area, while other members of the gang took to their heels.
The police operatives had placed suspected armed robbers under surveillance for some days before they were eventually arrested. Items recovered from them include one locally-made pistol, some cartridges, and 2 face Masks.
In the same vein, the operatives attached to Aguda Division on 20th February 2021, at about 1.35 pm, arrested two suspected traffic robbers while attacking and robbing a Toyota Siena Bus with Reg. No AAA 30 AZ, driven by one Apple Mohammed on transit at Olatunji Onimole Street by Brown Junction.
The suspects are 24 years old Ismail Abayomi, and 25 years old Seun Akinbunu.
The suspects and others at large attacked the bus, broke its side screen, and robbed one Atinuke Adisa of her Infinix-8 phone.
In another development, the operatives attached to the office of the Area Commander, Area E Festac, arrested two suspects with some vandalized rail tracks belonging to the Nigerian Railway Corporation on 20th February 2021, at about 4 pm. The policemen that were on routine check stopped the vehicle driven by one 21 years old Victor Akpanof Ijora, Lagos, and his accomplice, one Adesina Folorunsho at No 36, Byfield Apapa road, and discovered the vandalized rail tracks in the said vehicle.
They could not give any satisfactory account of the vandalized items but claimed that they got them from some miscreants.
The Commissioner of Police, Lagos State, CP Hakeem Odumosu has ordered that the suspected traffic robbers be taken to State CID Panti for thorough investigation while the Area Commander Area E Festac works with his DPOs and intensify efforts to trace the fleeing traffic robbers and carry out a thorough investigation on the vandalized rail tracks.
The police boss also reaffirmed the command’s commitment to continually flush out the criminals and hoodlums of Lagos State.
READ  OPEBI LAND TUSSLE: LAGOS JUSTIFIES ACTION ON DISPUTED LAND