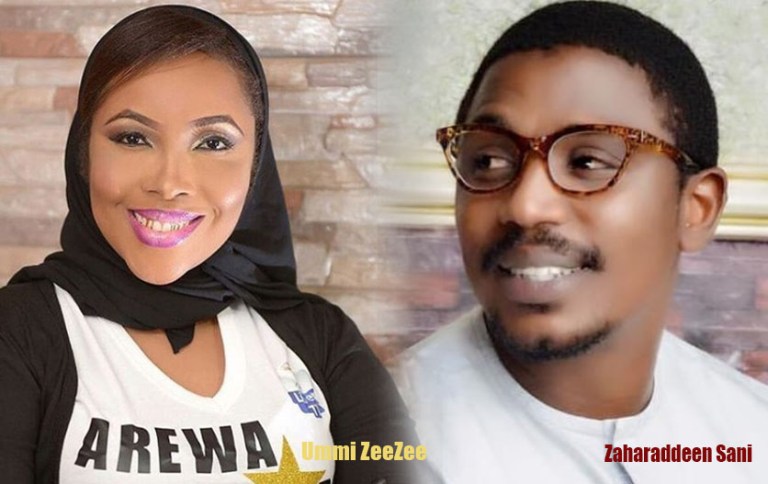 Incredible!  Two prominent Kannywood stars, Ummi ZeeZee and Zaharaddeen Sani, have threatened to drag themselves to the police over an alleged monetary gift from the presidential candidate of the Peoples Democratic Party (PDP), Atiku Abubakar.

Representatives of Mr Abubakar allegedly presented the gift after a meeting in Kaduna with Kannywood stars campaigning for him ahead of the February 16 presidential election.

Genesis of the altercation

Celebrities such as Sani Danja, Al’amin Buhari, Fati Mohammed, Zaharadden Sani, Imraanaa Mohammed, and Yakubu Mohammed have been mobilising support for the PDP candidate among their colleagues and fans.

On Saturday, January 26, the group held a meeting in Kaduna with top PDP members, including the Senate President, Bukola Saraki, who represented Mr Abubakar.

Immediately after the event, controversial Kannywood actress, Ummi ZeeZee, accused the organisers of cheating her and threatened to have them jailed.

She said on her Instagram page that she was cheated out of her share of the largesse from Mr Abubakar.

She labelled Sani Danja, Zaharadden Sani, Fati Mohammed, Al’amin Buhari, and Imranaa Mohammed as thieves who took money from Mr Abubakar’s entourage and shared it among themselves.

“I understand Atiku sent plenty of money to share for us. But all of you thieves walked away with the money and shared it among yourselves. Let me tell you, if not for my mother who begged me not to jail you all, I would have done that because you all don’t have the connection I have in Nigeria.

“Zaharadden Sani called me after the event and send N25,000 to me as my share. Let me tell you Zaharaddeen, I am not a beggar and I am more than that amount you sent to me, you cheat. I want to warn you all that should anything like this happen again and you keep me off it, I will deal with you and I mean all of you,” she said.

Sani said ZeeZee was making noise because she could not make an impact anymore in Kannywood and was never part of Atiku movement in the industry.

“The event was organised by five of us key in the Atiku movement and the PDP candidate sent in a representative in the person of Bukola Saraki. He attended the event and we told him what we had been doing for the success of the party and the presidential candidate in the ways we promote him and campaign for him among our fans and colleagues. It was a successful event.

“I met Ummi ZeeZee at the entrance of the venue and we greeted. I told her I was going back to my hotel room and I left.

“She later called me and said she heard that we were given money to share. I smiled and said ‘what do you want? You are not part of this event because you have never been part of it. We did our thing so what do you want?’ She said I should send her something. She sent her brother and I gave her N25,000. I told her it is not from any event. This is from me.

“She went straight to her Instagram page and wrote all those things.

“Let me tell you. ZeeZee has never come to us. She was not part of the organisers. She has never attended any of our meetings, and campaigns, which we have been doing spending our money because we believe in the candidature of Atiku Abubakar. She was not at the event and just like that she started speaking ill of us.

“I have reported the case to the police for false accusation and an arrest warrant has been issued. I am calling her to turn herself to any police station in Kaduna so we can all gather and she will prove when and where I was given millions of naira to share and I pocketed it. My colleagues will be present whenever she makes herself available. Meanwhile, if she does not, she will be arrested,” Mr Sani Said.

ZeeZee could not be reached at the time of this report as her phone number was not connecting. She did not also reply to mails sent to her.

How Atiku Abubakar And Peter Obi Sold Their Candidacy To Nigerians