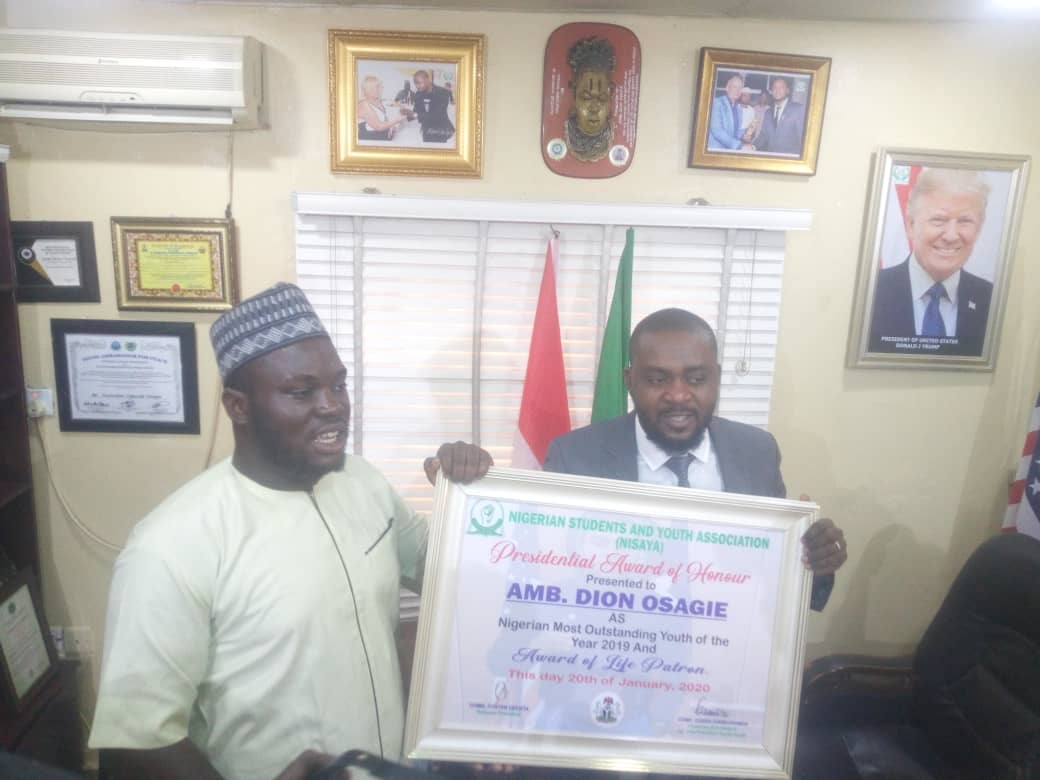 Nigeria Students and Youths Association, (NISAYA), Edo State chapter, yesterday, called on President Mohammadu Buhari to wade into the crisis of Edo State chapter of All Progressives Congress for rapid economic development of the state.

The acting vice president and state chairman of the group, Comrade Osamudiamwen Elvis Ogbidi made the call while conferring the award of the Nigerian Most Outstanding Youth of the year 2019 and award of life patron on Ambassador Dion Osagie in Benin City.

Ogbidi said President Mohammadu Buhari being the number one cititizen of the country, has the ability to call the governor of the state and the National Chairman of the party, Adams Oshiomhole to a round table with the view of resolving their differences amicably for the overall interest of the state and the party.

“You will agree with me that for a society to strive, there must be peaceful coexistence and today in our dear state, we have only one party creating problem for us and that is the All Progressives Congress. It is now a challenge of APC versus APC. The Adams Oshiomhole’s camp and the Obaseki camp.

“The president is the number one person in this country because the more the crisis persist, the more they will be spending money without making any effort. This money can be used to develop the state because the state needs more development especially in this era where development is the order of the day but if this crisis to loom, I can tell you categorically that we are in a great problem”, he said.

He said it is a shame that the crisis rocking the party is within the party adding if the leaders of the party who should have shown a good leadership role for the youths are unable to resolve their differences amicably within themselves, wondered what messages they are passing to the youths who are the future leaders of the country.

“Another thing this crisis is creating for us is that, it is sending a very wrong message to the youths who are the future of this country. And if we continue to see our fathers like the persons of governor Godwin Obaseki Adams Oshiomhole always having war of words every now and then, what are they telling us? That tomorrow when we become the leaders of this country, we should do the same thing or do worse? It is not so. If we are preaching that there should be peace, there should be peace.

“There should be peaceful, a relative peace, a peaceful coexistence between the party members, between the opposition and between every other parties that exist in the state. Now it is not even between APC and the PDP but it is APC versus APC, it is shameful”, he said.