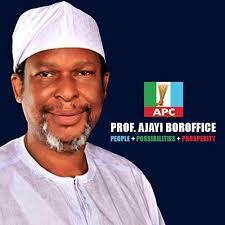 Ahead of the November 26 governorship election in Ondo State, the pulse of majority stakeholders in the All Progressives Congress (APC), Sahel Standard gathered is swayed towards the emergence of Senator Ajayi Borrofice as the flag bearer of the party.

Though the party in the state had denied anointing any of the aspirants for its ticket, feelers in the party is that leaders are wary of fielding a less popular candidate that will affect its chances of forming the next government in the state.

According to sources in the party, the scheming within the party, which are largely subtle is directed at the emergence of a candidate that will guarantee the party victory at the poll.

The arrangement will consolidate the party’s growing strength in the state, placed the Oka-Akoko born politician at a pole position to picks the party’s ticket as most of the party’s leader agreed will produce a victory.

While other aspirants jostling for the ticket of the party were as well considered, the general consensus by most leaders of the party who considered the advantage of the party taking over the Alagbaka Government House, favoured Borrofice.

The Professor of Zoology, who is currently representing Ondo North Senatorial District in the senate for the second term, is believed by most of the leaders to have the necessary political wherewithal to deliver victory for the party.

READ  When is best to exercise? Empty stomach or after a meal?

He noted that ” he (Borrofice) is considered by many as the ideal candidate that can give our party (APC) victory in the governorship election. Not only is he well entrenched among electorates in the state, the manner which he dared Mimiko and went ahead to win his re-election to the senate is intimidating and cannot be easily ignored.

The source stressed that to ensure Borrofice emerge the party’s flag bearer, there have been moves by some leaders within the party to mobilise their structures to back him, noting that some other aspirants jostling for the party’s ticket may as well backed down and throw their weight behind Borrofice, following the intervention of the leaders working

“Everyone knows this time is our best shot at taking over Ondo State and we must be cautious not to throw away that chance. Listen, all those aspiring to fly our party’s ticket are good, that remains incontrovertible.

“But what Ondo State electorate want is the best and we must not give them the contrary. Borrofice happens to be our best shot and I think everyone, including our leaders are seeing that fact. I share the reasoning that he would pick our party’s ticket, if otherwise, the 2012 experience may reoccur,” he said.