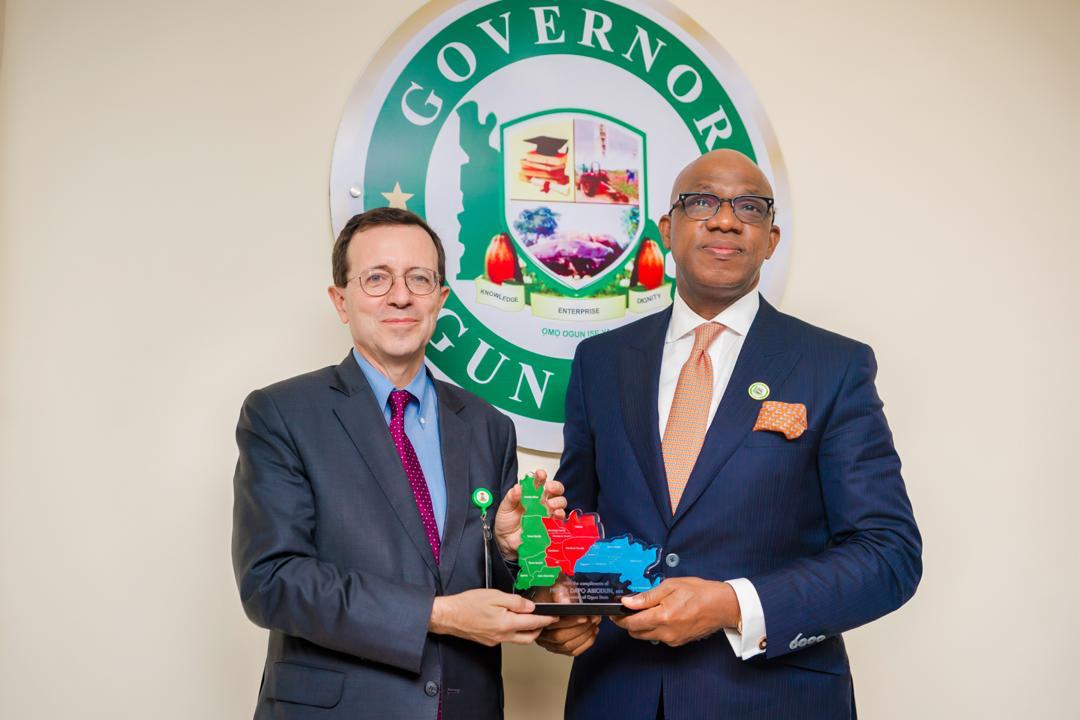 The Ogun State Governor, Prince Dapo Abiodun has said the urban regeneration plan of his administration would be holistic as it would be sustainable and cater for unborn generations.

Governor Abiodun, who stated this when he received the French Ambassador to Nigeria, Mr. Jerome Pasquier who paid him a courtesy visit in his office at Oke-Mosan, Abeokuta, noted that some cities in the State were very old and needed regeneration.

“We are looking at regenerating some of our old cities. Abeokuta, Ijebu-Ode, Sagamu and Ilaro are very old cities. We have resolved to look at them, particularly in a sustainable fashion.

“While doing that, we will not compromise the future. We are trying to make them sustainable for today, while keeping in mind that we must factor in the future yet unborn,” he stated.

He said when completed, the new cities would have efficient waste management, adequate means of controlling the environment, clean energy and water supply.

Prince Abiodun, who intimated the Ambassador of the the various interventions his administration has carried out in the health, education and infrastructural sectors, added that the State schools, hospitals and roads were wearing a new look, saying that more infrastructure and basic amenities would be provided to accommodate the spillover from Lagos State.

Speaking on the potentials for possible investment, Prince Abiodun said with a land mass of more than 16,000 square kilometres, of which a large portion was situable for the cultivation of food and cash crops. The State was noted for producing rice, currently the largest producer of casava, has the best-quality cotton and blessed with a large expanse of rubber plantation.

He said apart from having large palm oil plantation of several thousand hectares, the State also has the biggest fish farm colony which has become a model for the United Nations.

Prince Abiodun added that with the agricultural potentials of the State, it was capable of feeding other states, increasing its revenue base, providing employment and ensuring food security.

He said his administration has established an agency to conduct, audit and provide a roadmap to actualising the “Light Up Ogun,” explaining that this was to ensure that most cities in the State have uninterrupted power supply.

Speaking earlier, Ambassador Pasquier said his home country wants to be active in her relationship with Nigeria, describing Ogun State as dynamic and suitable for investments.

“France is interested in agriculture and we are convinced that we can do many things In the field of agriculture with Nigeria, especially Ogun State.

“Ogun has fertile land and climate condition which is a very good prospect for us,” he noted.

Ambassador Pasquier informed that his country would host an agricultural fair next month in Paris, expressing delight that a delegation from the State would attend the fair, as it would provide a good opportunity to meet with French businessmen and women with expertise in agriculture, especially tropical agriculture.

The French Ambassador used the opportunity to invite the State the French-African Summit scheduled for June, where companies from all African countries and France with solutions on sustainability would gather, saying the occasion would not only be for political discussions alone, but would deal with business and climate change.