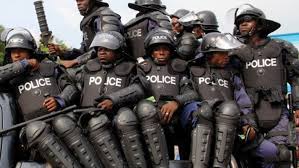 The Nigeria Police Force has deployed three new Commissioners of Police in Ogun State ahead of the general elections.

Deputy Inspector General of Police (DIG) in charge of the southwest, Yakubu Jubril, disclosed this on Thursday at a strategic meeting with senior police officers in Abeokuta, the state capital.

The meeting also had in attendance members of the civil society and political supporters among other critical stakeholders in the polls.

Mr Jubril explained that the three police commissioners deployed for the elections would be in charge of each senatorial district of the state.

According to him, Mr Ahmed Iliyasu remains the substantive police commissioner in the state, bringing an end to speculations that he has been deployed to another state.

The DIG who said the police were ready for the elections warned politicians to prevail on their supporters, noting that the force would not condone any act of thuggery or violence.

He also reiterated the commitment of the police to enforce the 300-metre distance stipulation to ensure safety at the polling units.

“We are not postponing elections” – INEC

ALHAJI ATIKU ABUBAKKAR WILL WIN THE PRESIDENTIAL ELECTION, IF THE ELECTION WILL BE FREE AND FAIR -DR CHRIS OKAFOR