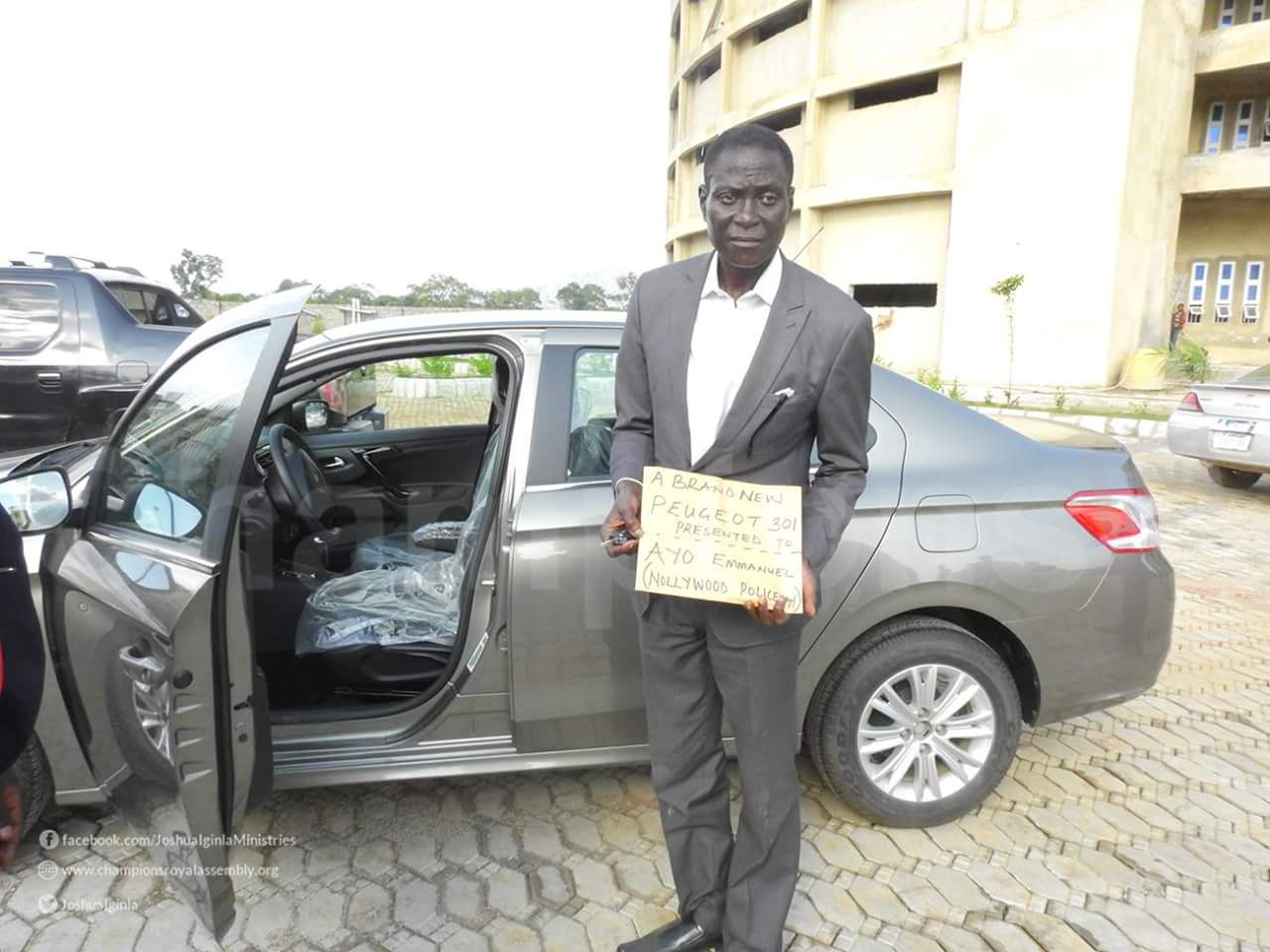 Veteran actor, Ayo Emmanuel AKA Nollywood Policeman had an exciting experience in his life on the 9th of October, 2016 during a regular service programme at the Champion Royal Assembly Abuja, Nigeria where Prophet Joshua Iginla ministered to the congregation during which he handed Ayo Emmanuel a well known actor in Nollywood industry a brand new Peaugeot 301 car as a token of God’s blessings. The actor while receiving the car gift shed tears of joy as all that happened came to him as a huge surprise.

In an exclusive chat with us, the nollywood actor described the situation as the biggest shock in his life as he came to the church on Sunday the 9th of October with the church bus though hoping to return back home , not knowing God has a better plan for him.

‘’ I was just coming to church to fellowship and go home to prepare for a film recording someone had invited me to on Tuesday, but here i am today, i thank God for using Bro. Joshua Iginla to bless me, i thank God for using him for the increment he has added to my life, i give God all the glory. I came in a public transport (the church public transport) and was hoping to catch up with the bus but here i am driving home in a brand new 301 series car.

Speaking further on how he met the generous but powerful Prophet, He made it known that He was only invited during one of the annual birthday ceremonies of the Prophet and since then, he developed great interest in him.

‘’ During last year anniversary, we were invited, I mean Nollywood actors so i was one of the actors that was invited and that was my first time of coming to Champions Royal Assembly. Thereafter, i developed interest in the style of worshiping, so i come here once a while because i stay very far away in Abuja. Once in a while i fellowship here, so since last year after PAPA’s birthday I’ve always been coming,  i like the style of fellowship, i like his style of socialising and especially his love for Nollywood. He’s about one of the biggest pastor i know who has feelings for Nollywood and a great giver, I’ve never seen that before. So i developed the interest and i see a true pastor, the real person that was build to increase, to impact more life into the people’’.

Recounting the many helps the Man of God has done for him, He narrated how he was duped by one of his trusted friends who disappeared with over N1million which was meant to get him a car and this led to a serious illness and had no money for treatment after spending a lot, and how Prophet Joshua Iginla helped him out.

‘’ I must confess that earlier before now, I was down, i have some problems like i use to have a car a 406 prestige car due to one reason or the other i had to sell it, add money to it close to 1 million, give the money to someone who i trusted so much to get me a car and the person disappeared with my money, that affected me, break me down a lot, I was ill, I went to hospital i was diagnosed typhoid, malaria 1& 2 so many issues and in the process I think I was given a drug that later reacted to my body, and I went back to the hospital and day after I was given another drugs which leads to  me going for another test and it was during that test they discover that i don’t have blood, that my blood is like 20% because I noticed that am not feeling fine, anytime i stand, i can’t stand too long, am feeling dizzy so i was admitted, i had no money & i didn’t know where to go. So i just call Bruno who happens to be one of the veteran actor here in the church, i told him am sick and in the hospital, that the hospital requires some money and the money in my account is not up to that. He asked me to call PAPA (Bro Joshua Iginla) and i was relunctant, but i remember meeting him once and he told me to call him if i have any problem, so i didn’t call PAPA i sent him text, i sent the Personal Assistant a text too and before i know it they send a whole hundred thousand into my account which i used to clear the hospital bills last two weeks, then i started attending church activities’’

In addition, he described the Prophet’s Giving spirit as one that he has never seen before and also implore people not to say anything bad against the Prophet. He said the Bro. Iginla is someone that doesn’t love to show-off and has done a lot for people he doesn’t know and for that people think he does this only during his birthday celebration or anniversary but that is not the case.

It would be recalled that the Prophet gave N10million donation to a muslim acid victim who needed surgical operation to be done in India, the same day he presented to the Nollywood thespian a car gift.