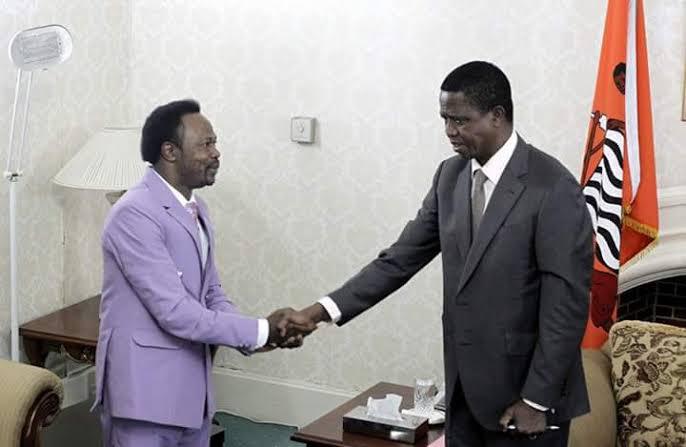 Contrary to the falsehood being fabricated about Prophet Joshua Iginla’s prophetic message and revelation about the forthcoming Zambian Presidential election, Iginla has maintained his position that he is a prophet who cannot be bought but clearly stating the mind of God.

Iginla maintained that when he predicted the victory of the Incumbent president, they celebrated it but now that God revealed prophetically that the opposition party led by HH has been ordained to take over, they claimed he was paid to say so. No, he can’t be bought with money!

He reiterated the prophetic stance that he is not a political prophet that can be bought, rather speaks God’s mind without fear.

“As a prophet, am not in support of any Political party but the mind of God must be revealed”…

May God keep Zambia, and may the will of the People and the will of God prevail in the forthcoming election.
” I SEE A WIND OF CHANGE ”

It would be recalled that the General Overseer of Champions Royal Assembly, Prophet Joshua Iginla has released series of prophecies about the Zambia election that will be coming up on the 12th Of August, 2021.

During a live service yesterday at his church, he made it known that God has shown that the election will be tough and that the president, Edgar Lungu has very slim chances in this election.

He mentioned that Hakainde Hichilema, Zambia’s main opposition will become a president in the country.

In his prophecy, he warned the president to quickly work on betrayals in his camp because he foresees that the chair he is sitting on spiritually isn’t balance, and the unbalance part is caused by those he relies on.

He also clarified the wrong insinuations about his prophecy stating he is not a political prophet that can be bought, rather speaks Gods mind without fear.
“As a prophet am not in support of any Political party but the mind of God must be revealed”…
May God keep Zambia, and may the will of the People and the will of God prevail in the forthcoming election.
” I SEE A WIND OF CHANGE ”

Read the full prophecy below

The election that is about to take place is going to be a tough one, as a prophet, I am not in support of any party or candidate, I am just a voice that God is using. My opinion is neutral but God’s opinion remains.

There should be no attempt to manipulate any result, let the will of the people reflect through the ballot paper, and let God’s will be supreme. Will people cry foul? Yes, but it won’t stop the will of God. The result will be delayed to negotiate behind the scene because of tension but there should be no manipulation.

His Excellency Edgar Lungu meant well for Zambia but there are Judases around him, they want to scuttle his vision for Zambia, did he allow them to prevail? If he did, the outcome will be best known as the outcome of the election

If He dealt with his Judas, there will be no need to worry but if He has not, you can tell by yourself that there will be surprises on the day of election

The unbalanced part represents the people he trusts that he thinks will stand for him on the day of the election, if he doesn’t work on his Judas, there might be no chair to sit on.

For Hakainde Hichilema, I said this five years ago, it is in your destiny to be the president of Zambia, how it’s going to happen, I don’t know and I’m not changing my position about that, I have not met him in person.

For HH, it is in his destiny to be a president, it is written in his destiny, how many times is he going to fail? I don’t know, is it the time? It’s left between him and God.

Speaking as a man, with the seasons and things I see in the cloud, as a man, I can tell you it is the time but that is left for God. Don’t give up, it is in your destiny to become president. I want to say it that HH is not the David of Zambia but the Saul of Zambia. Anytime he becomes president, he will be there as the Saul, not the David.’

Dr. EMMANUEL ABIODUN PASSES ON AT 89