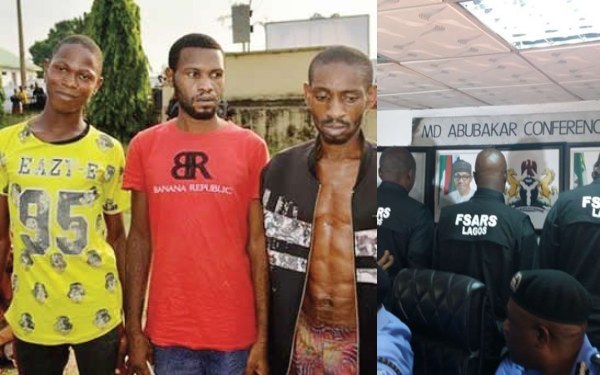 Three robberry suspects identified as Obinna Opara, 32; Kalanwa Goodluck, 32; and Chimamkpa Eziria, 17 who operate in NYSC uniforms have been arrested by SARS operatives in Imo State.

One locally made pistol and one foreign made pistol, were recovered from the robbery suspects who operate in NYSC uniforms. Imo State Commissioner of Police, Dasuki Galadanchi, who paraded the suspects before newsmen, said that one Mrs Maria Chijioke and occupants of a Toyota Sienna were recent victims of the suspects.

“The suspects were arrested between January 21 and 24, at Umerelu Ikwerre Local Government Area in Rivers State, as well as at Mgbeshi in Ohaji and Egbema LGA of Imo State.

“They have made useful statements to the police and confessed to robbing and kidnapping unsuspecting road users along Port-Harcourt-Owerri Road. They also confessed to wearing NYSC uniforms and stopping drivers to seek assistance from them after which they would kidnap occupants of such vehicles for ransom” he said.