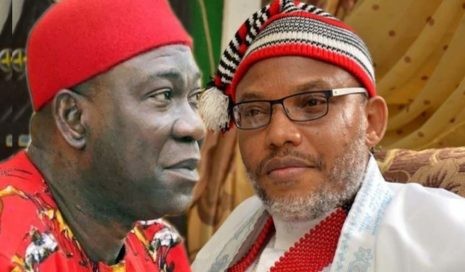 The unprovoked attack on former Deputy Senate President, Ike Ekweremadu, in Germany, over the last weekend, by some disgruntled elements, operating under the toga of IPOB, can only be described as an infantile display of crass ignorance and lack of sound parental upbringing. No responsible Igbo man or woman would support such a disrespectful and disturbing development. It is unfortunate that some Igbo youths in Germany would present themselves as ready tools to be used for the ignoble purpose of denigrating the values of respect, decorum and temperance, which are core to the Igbo worldview.

To think that the ugly incident took place when the former Deputy Senate President and a proud Igbo son was visiting Germany to partake of a highly revered cultural event – the annual New Yam Festival – is a bad precedent and a slap on the face of every right-thinking Igbo person. It is an affront on the high esteem upon which the Igbo culture is built and must be totally condemned.

More so, Nnamdi Kanu’s endorsement of the nonsensical act coupled with his directive to IPOB members abroad to mete same treatment to Southeastern leaders only signal the height of desperation by a frustrated soul to vent his spleen on a people he claims to be fighting for.

In an era when creative minds of Igbo extraction are working hard to reorient Igbo youths and take them off all forms of antisocial behaviours, it is abysmally baffling that a self-acclaimed freedom fighter, in the person of Nnamdi Kanu is positioning himself as a clog in the wheel of our collective progress as a respectful, civilised and industrious people.

The Southeastern Governor’s Forum, under the able Chairmanship of Engr. David Umahi, has already released a statement, condemning the attack on Ekweremadu. It has clearly distanced itself from the activities of Nnamdi Kanu and his uncultured ilk, who go about embarrassing the Igbo nation under the guise of fighting for its liberation. All Igbo elders, wherever they are and whatever their political, social and religious inclinations, should key into the Umahi example; they should call a spade a spade and condemn in totality the sheer resort to waywardness by a group of hooligans who only typify rebels without a cause.

We cannot afford to throw away the gains we have recorded as a people in terms of engaging our youths with progressive ideas and thoughts for nationbuilding. The average Igbo youth is an inventor and asset to Nigeria and to the world hence, he should be guided to make his/her country and the world at large a better place. It is only through rigorous attitudinal change principles that the Igbo leaders can truly empower their youths and transform their lives in many positive ways. Sound parental upbringing remains the bedrock for the actualisation of the this illustrious ideal.

Ray Nkama is the Special Assistant to Ebonyi State Governor on Attitudinal Change and writes from Abakiliki.