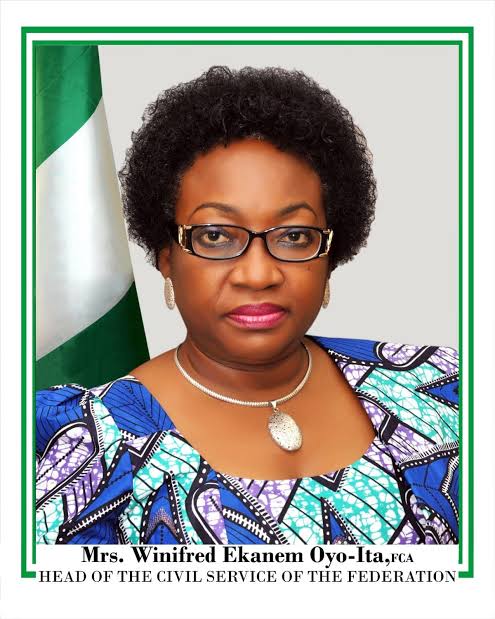 The National Frontiers NF calls on all Nigerians to shower their anger over latent and manifest actions of the over-influential Chief of Staff to President Muhammadu Buhari, Mr Abba Kyari and his cabal who at present are holding the nation hostage by their illegal capture of State powers, under the Buhari presidency. This call is necessitated by the ongoing onslaught on the Head of Service of the Federation, Mrs Winifred Oyo-Ita by Alhaji Abba Kyari who is hellbent to ridicule and consign into her obscurity.
The President Buhari administration has, since its inception,led the world to believe it is focused on the war against corruption but has in its actions demonstrated an unmistakable disdain for those who expose corruption and stand against the official state lootings that the Abba Kyari led cabal have become known for. The ongoing harassment of Mrs Oyo-Ita, is just the latest in the series of assault that have been orchestrated by this same cabal against her, and it is mainly  calculated to humiliate her further; and no matter what the administration may like Nigerians to believe, the nonsense has got to stop now.
While all indicators show that the operators of the Buhari Presidency continues to kick the war in its soft belly, they have also been unrelenting in telling the world, the war is stronger than ever. The question is: is their anything like anti-corruption war under this administration?
Why are they persecuting Mrs Oyo-Ita?
There is no doubt, that one thing has become synonymous with the Buhari’s administration. That is, his penchant for appointing mainly people of his religion and ethnic stock, into critical positions of government, against every know rule of decency and principles of federal character. At the centre of this highly condemnable practice is President Buhari’s all powerful Chief of Staff, Abba Kyari. Over the past couple of months, Kyari have orchestrated series of campaign of calumny against the Head of Service, based on her refusal to endorse several atrocities that were intended to be perpetrated through the nation’s civil service. These cases were numerous but principal among whom were the illegal and shameful reinstatement into the Civil Service, of Mr. Abdulrasheed Maina, the notorious Chairman of the Presidential task force on pensions, who is now at large. How Maina was smuggled into the country and directed to resume his position at the Ministry of Interior before the outcry by Nigerians remains only known to Mr Kyari and his cabal.
The ongoing persecution of Mrs Oyo-Ita is not in anyway far from the desperation of this same elements within the Buhari Presidency, to remove and replace  her with another candidate of Mr Kyari from the north.
Only recently, the State House Medical Centre, which attracts  a huge annual budget,  was downgraded to a Clinic. A decision illegally taken with the intention to remove all the Senior Consultants at the medical facility, who are mostly Southern professionals.
All these were single handedly embarked upon by this same Chief of Staff to the President.  With plans already concluded to sell the multi-billion Naira Medical Center  to investors from Dubai, United Arab Emirates, they must push away the staff especially Doctors and Senior Southerners in the medical center, and get them scattered across other places as civil servants.
Having perfected this plan, the Chief of Staff originated a memo and subsequently sent a list of those to be disengaged to the Head of service, who subsequently rejected giving approval, as She pointed out, that the recommendation was too sectional and does not reflect federal character. Her decision then prevented the cabal  from achieving their goal. Twice, they have tried but the Head of Service has continuously rejected the decision.
Not only has she rejected the letters requesting for her approval of this shoddy deal, She has also been reported to have confronted the Chief  of staff at the Federal Executive Council meeting over the same issue, an action which infuriated Mr Kyari.
The National Frontiers had warned this administration from the start not to let the war against corruption fizzle. At this juncture, we are beyond doubt that President Buhari is demonstrably opposed to any action that would curb corruption within his inner circle, as symbolised by Abba Kyari. It is pathetic that the hope and expectation of all Nigerians that corruption would begin to decline under democratic administrations has been misplaced.
While the persecutors of Mrs Oyo-Ita may think they have calculated correctly to an extent, they must also remember that Nigerians are not fooled. We all know this war on corruption is now a gimmick.
The adminstration is setting itself up for opposition and civil action with its in-your-face humiliation of the woman whom we all respect, and have given so much to this country.
The disrespect for honesty, probity and integrity by this administration has to stop. The nation has been abused for too long.
President Buhari’s Chief of Staff  has to be called to order by the civil population.  We must rise up and fight against this persecution, and the many things we have been promised in vain by the weak, do-nothing administration.
If we fail to fight , we fail to protect our interest, and we kill the nation slowly.

Apostle Suleman Inducted As Fellow of Nigerian Books of Record