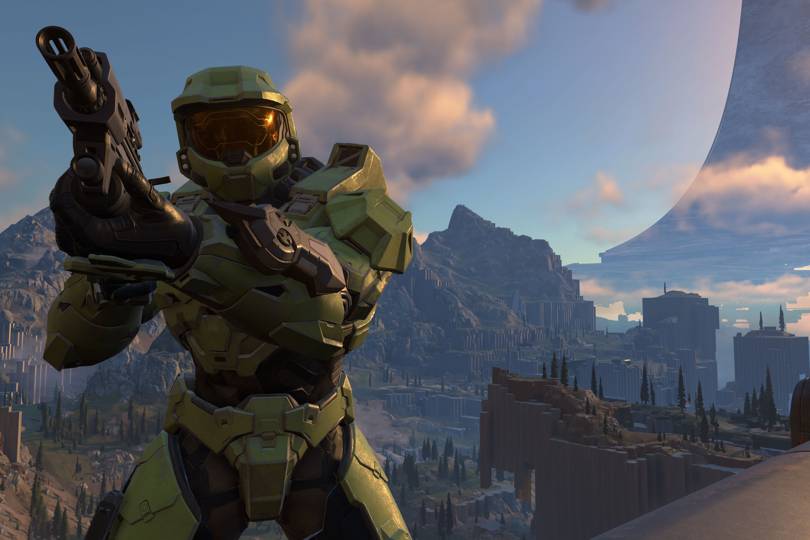 The Series X is the most powerful console ever built. But so far the games available haven’t been able to show what it, and developers, are capable of. Around the time the first Xbox was released, in 2001, Peter Molyneux – the mercurial British creator of the Fable series – began talking up a giant leap in gaming, which he claimed could be found in the game he was developing. Every corner of Fable’s Gameworld, he explained, would be so responsive and overflowing with life that as the hero walked across the countryside, he could toss an apple core into the long grass, only to return years later (in game time) to find a tree had grown.

But faced with the reality of the original Xbox hardware, Molyneux’s boast was far beyond what he could deliver, and the apple core concept went down as an ambitious ideal for what Gameworld design could someday hope to achieve. Now, nearly two decades, and three generations of Xbox consoles later, such realism and responsiveness is no longer out of reach, says Jason Ronald, the development chief of the Xbox Series X.

Ronald is explaining what’s under the hood of the new generation consoles and why it matters. “I think it really comes down to larger, open, dynamic, more living worlds, where what you’ve done a couple hours ago is persistent in the world,” he says. “It’s really about creating that universe.”

Some reviewers have been struggling to find the feature or the game that makes a Series X worthy of purchasing over a PlayStation 5. This is the beginning of Microsoft’s answer. “Historically, when you think about console generations, it’s primarily driven by graphics innovation or graphics fidelity,” says Ronald, speaking days before the global launch of the Series X, along with its lower-spec sibling Series S. “The reality is developers can already deliver a really high quality, amazing, visual, 4K, HDR-enabled experience. So much of this generation is going to be how games feel and how they play.”

Reviewers have been impressed by the console’s mighty specs and evident power, but the delay of Halo Infinite into 2021 has left them without a standout game to show how this translates into the “emotion” and “immersion” that its manufacturer has promised.

Vanishing away loading times (which the big, boxy Series X certainly achieves) is welcome news for sure, but it’s a fairly lukewarm promise. However, developers from major studios who have spent months working with Xbox’s new architecture say the consoles’ Quick Resume feature is best seen as a teaser of the true achievements Microsoft has made under the hood.

Hands-on, the power is genuinely impressive, earning praise from PC gamers used to spending four or five times the Series X list price on a top-end rig. Microsoft has doubled down on calling this the developer’s console, and played up its co-development with input from its own game studios, major players and smart indies. In practice, this means developers no longer have to constrain the play space or programme in arbitrary work-arounds – “funneling the player through a hallway or a corridor or an elevator” which takes them out of the experience or slows down the play experience, Ronald says.

Yet for all the talk of teraflops, the fan response to July’s video of Halo Infinite’s gameplay was just what Microsoft didn’t want: its flagship release being met with a chorus of shrugs. A bad game would have been one thing, but an underwhelming game that failed to show what, if anything, the console could do differently, sounded alarms about whether Microsoft could match competitors’ marriage of hardware and experience (with Nintendo’s Switch still charmingly setting the benchmark, here).

On launch day, Halo will be missed, with neither the enhanced Gears 5 nor the three-year-old Destiny 2 filling that hole. There’s always a launch-day racer that shows off the latest graphics and physics, and Dirt 5 fills that slot, with satisfyingly wet mud and slippery performance, but even that isn’t a next-gen exclusive.

This strange moment is partly due to Microsoft’s decision to look beyond console gaming’s generation-by-generation leaps. Ronald says Microsoft is now committing to give the best possible experience “wherever a player chooses to play”. Its Amazon Prime-like subscription service, Xbox Game Pass, already has 15 million subscribers and allows them to play the same game while swapping between last-gen Xbox One hardware, Windows PC, and Android devices. Since September, subscribers have had access to its xCloud feature, which allows them to cloud stream games, ala Google Stadia.

No doubt Game Pass means a novel kid-in-a-sweet-shop experience the morning when the Xbox Series X arrives. Subscribers will have hundreds of titles at their fingertips, visually tuned up from older generations by the systems “AutoHDR” feature, with faster load times and higher resolutions. But the games themselves will largely be the same ones that were available on older consoles.

Ronald says he doesn’t believe this is the “last generation” of truly new Xboxes we’ll see before cloud computing takes over. However, with the Series X, Microsoft – which has in the past spoken of its desire for a more PC-like evolution of hardware – appears to be putting to bed the generational lurches of the past. But in Microsoft’s embrace of truly cross-platform play, it has robbed gamers of the thrill of past generations’ launch day excitement.

Microsoft seems to be playing the long game. It has recruited talent to pair with this hardware, including the $7.5 billion purchase of ZeniMax, parent of Elder Scrolls and Fallout publisher Bethesda. The company’s massive outlay (the acquisition cost more than Disney paid for Marvel, Pixar or Lucasfilm) is an indicator of how important first-party exclusive experiences are, in a generation when consumers are not just buying hardware but very likely joining a subscription ecosystem. Potential buyers want to see a formidable line-up of games coming up, at least to match Placentation’s upcoming exclusives including Spider-Man: Miles Morales and a new God of War sequel.

In Microsoft’s camp, there are notable absences (some blamed on Covid-19 related delays) the standout games from their key franchises have failed to materialize – with Halo delayed and a Fable sequel teased but not released. Other titles have been pushed back too, including The Medium – a psychological horror in which the player flips between the real and spirit realms – which has slipped to January.

In the short term, perhaps the best indication we’ll have of whether Series X can set itself apart from previous gens or competitors will come soon from Ubisoft’s two highly anticipated launch titles Watchdogs: Legion and Assassin’s Creed Valhalla – which are also released on PS5, and both previous gen consoles, as well as PC.

Claude Langlais, technical director at Ubisoft, says the Series X has allowed developers to finally convey the joy of real-world exploration. Rather than giving players a kind of coach-tour view of a Gameworld – creating impressive scenes but being forced to push players back into confined environments as they shuttle them in between – the graphical detail and CPU combine to create a sense of awe in open play.

“It’s a big world, and at any moment, you can stop and get breathtaking views,” says Langlais of Assassin’s Creed. “I really feel like you get the same kind of thing in this game where you’re traversing the real world, exploring, and then you stop and just soak it in. This really comes out clearly because you see that very high resolution and very high quality of detail.”

In the longer term, Bungie, which built the launch-defining Halo: Combat Evolved for the original Xbox back in 2001 (but is not in charge of Infinite), says increased CPU time, in addition to meaning better resolutions, opens up developers choices for future releases. “We could, in the future, plan on having more players, if that was something that design wanted to do,” says Andy Firth, lead platform engineering architect. “We could have a significant amount more simulation in the world, more trees,” says Firth. And more of the ray-tracing light simulation – which Ronald calls the “the holy grail of computer graphics” – rendering in real time, say, the headlights of a moving car reflecting off damp tarmac. “With the previous generation, we had hit kind of the peak of what could be done. With this new generation, we’re doing that same fidelity, but we’re barely touching the surface,” adds Firth.

Coalition, the makers of Gears 5 and Gears Tactics go one further in hype (although they are part of Xbox Game Studios). “We can load up and display a whole section of the world, as fast as you spin the camera around and you won’t even notice the [loss of] detail,” says Mike Rayner, Studio Technical Director at The Coalition. “And so we can actually render and draw more than we can possibly fit in memory.

“You know the metaverse? This holy grail of being able to create a lifelike replication of the world? This is the box that’s really designed to do that.” But without the games to back it up, the Series X remains a black box of hype and possibilities. It may well live up to Molyneux’s boasts about Fable, but until truly next-gen games finally arrive, it’s just unfulfilled potential – a seed planted in the ground.