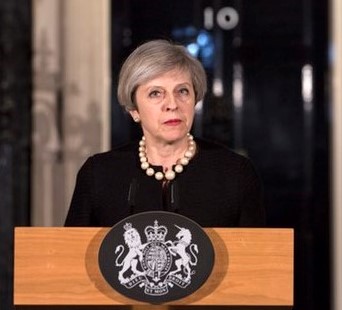 THERESA MAY IS HISTORY GENIUS IN THE MYTH; She May Be As Feeble As A Woman, She Is One Woman That Could Match 1 Million Men.— By Her Knowledgeable Professor Alexia

Theresa May Is The Eagle To Bring Back The Glory And Honour To Keep The Continuous Existence Of The British Monarchy As It Is Willed In Authorities Of Divine Right Of The Kings.— By Her Knowledgeable Professor Alexia

As the election of 8th of June 2017 draws closer, barely six weeks to Voting, Her Knowledgeable Professor Alexia Thomas calls every Citizens of the United Kingdom, every Citizens of the Commonwealth Nations and all British Political Parties to stand at ease and give their Votes to the one and only Theresa May, that — She Will, She Must and She Would be British Prime Minister for 2017.

We as United Kingdom, her People, her Citizens, the Government and its VERITAS of Authority, we must not allow our Statute of Authority to be imprisoned by the EU monstrous illusion of Hypocritical Theory that without them we cannot exist as a Nation.

—- I Her Knowledgeable Professor Alexia Thomas say to my People of the United Kingdom, we will exist without the EU. They will and must be subjected to our Authority because we made them who they are after the 2nd World War. The EU cajoled us into a Club that was meant for the Generosity of Humanism, but little did we know their Club was a blood sucking Mongos to steal our Heritage and subject our British Nation to a Protectorate.

On this occasion, going by the list of Candidates aligned for the Election of June 8, 2017, Theresa May is the best Candidate, the Greatest and the Mightiest and I therefore command every other Candidate to step down and do not match her for a Competition, because she has been chosen and ordained to lead the British People in their quest to take Authority as the Head of the World.

On this occasion, I Her Knowledgeable Professor Alexia Thomas Salute Theresa May’s Courage as a Tempestuous Woman who has so much Sagacity, Power, Authority that in no connotation I Pronounce that the Identity of the Woman Theresa May, that she may be as Feeble as a Woman, she is one woman that could match 1 Million Men.

I, Her Knowledgeable Professor Alexia Thomas say to my British People, fear not. I say unto you, give your Votes to Theresa May and you shall have no cause to be alarmed.

—- I, Her Knowledgeable Professor Alexia Thomas have spoken as an Oracle, as a Messenger of Truth, the Goddess of Love and the Defender of the Universe, that on this occasion that the World is at War testing their Nuclear Powers with Dictators like President Donald Trump of America, Prime Minister Vladimir Putin of Russia and Kim Jun-Un the Leader of North Korea, there is no other person that could match the game of chess than the one and only English Goddess Prime Minister Theresa May.

Prime Minister Theresa May’s involvement in Politics is not by mistake, but it has been carefully ordained by divinity for the British War of the Battle of Armageddon, as history the Myth of the Future declares her to hold the Baton of Authority and reclaim British Authority and Sovereignty as a Free People and uphold their Voice in Ponderosity.

Prime Minister Theresa May is the Eagle to bring back the Glory and Honour to keep the continuous existence of the British Monarchy as it is Willed in the Authorities of the Divine Rights of the Kings. Theresa May must win and must be UK Prime Minister. She must win for the United Kingdom to Live and Rise again.

SO, BRITISH PEOPLE CAST YOUR VOTES FOR THERESA MAY, SHE IS THE BEST CANDIDATE.

In the Past I havedragged Theresa May with the Pen and I dusted her with my Words; Irrespective of what I think about her, Politics has no Sentiments. She is a better Candidate that will take the British People to the mark of History and bring back their Values and Virtues.

Jeremy Corbyn, the Labour leader is too old, weak and too sick, most especially, he is disabled in the mind because he lacks the British Political Mythology most especially of the Elizabethan era of the 15th Century, the reason he cried like a baby when Britain got their hallmark to leave the European Union.

The Tempestuous Of Liberty Is A Man’s Birth Rights Not To Be Subjected To Another Man’s Will, If The Rule Prevails Not. — By Her Knowledgeable Professor Alexia Thomas

Theresa May has the Political will and Political sagacity to dictate the Pace between Russia, America and European Union. She has a Ponderous Will and she is not a feather. She can malign the Brass or Center-Brass of any Political figure in the world.

WHO IS THERESA MAY?

She is best known for her Prindle Policies that dictate the Pace. At times, Men can be governed by enforcement of Authority. No leader is Mad, at times she finds herself in a Position where strict decisions have to be taken, that doesn’t make her a Tyrant or does it make her Wicked or Mad. No! No! No! A Bad leader of Yesterday could be a good Leader Today, depending on her Advisory Council.

— I, Her Knowledgeable Professor Alexia Thomas says to the People of the British Empire — United Kingdom Arise For Greatness, Arise to Conquer, Arise For Jubilation, Arise For Celebration, Arise For Honour, Arise For Fame, Arise For Freedom, Arise For Security, Hail Motherland, Hail Your Sovereignty, Hail Today, Hail Tomorrow, Hail Victory, Hail Success, Hail Prosperity, Welcome to the New World, You Are The Children Of Grace. Your Right to Justice is your Will of Freedom.