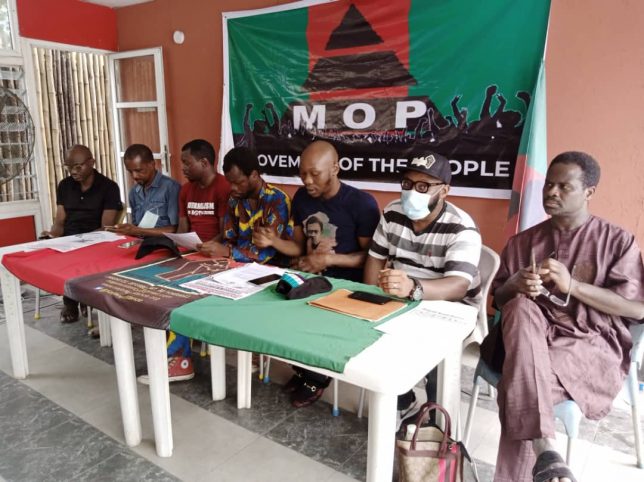 The afrobeat legend Seun Kuti, has described the threat by the government to close down Afrika shrine over his plans to launch the ‘Movement Of the People’ as unconstitutional.

Kuti made the statement during the relaunch of a new political movement at the Kalakuta Museum in Ikeja, noting that the ‘Movement Of the People’ was created to ensure good governance and accountability.

He announced the revival of his father’s political party, the Movement of the People(MOP) which was established in opposition to the country’s elites. ‘The idea is that we liberate the Nigerian people, they might not be on this table, but I want to guarantee you that this movement will be the movement to cultivate those minds, those ideas.

“The pan Africanist and socialist foundation is a movement that cannot survive without the Nigerian professionals and the middle class.

Kuti insisted that the MOP will remain a movement and will not evolve into a political party except the need eventually arises.

He intended to run for the presidency under its banner but was barred from taking part.”the upsurge of African youth have started ,each generation have a duty to play,” he warned.

He noted that with the development of the #EndSars Movement, Nigerians have begun questioning their leaders and demanding answers.

He wondered why the police continued to infringe on the rights of the people to freedom of association in a democratic state.

The police had threatened to close his family’s nightclub, the New Afrika Shrine in Lagos, if he held a meeting of his movement there.

As early as 5am heavy police presence surrounded the venue on Tuesday morning.

The police had in a warning letter sent to the Kuti family on Monday by the Divisional Police Officer (DPO), S. O. Ahehoje of Alausa Police Division, under Lagos state command, cited the recent violence arising from the #EndSars protests as its reason for calling for suspension of the programme.

READ  'I have never beaten any of my children' - Veteran Actor, Zack Orji

According to the letter ,”it is on this premise that I write that such a gathering or meeting planned to be hosted at your venue is not welcome at this perilous time when the security of the nation is trying to find her feet to stabilize all threat to life and properties.

“You are hereby warned to suspend such gathering as any infraction that may emerge from this gathering will be tagged a deliberate action to sabotage the transition and restoration of the peace in Lagos State by the Lagos state Government and the Nigeria police Force”, the letter read.

Seni Ajai, a Human Right group, Socialist Vanguard Tendency (SVT) said Nigerian masses have suffered enough adding that the services the government render to the masses are for themselves which need total change.

According to him, what you are seeing today is a process of putting something concrete on ground that will represent the interest of the masses and Nigerian youth.

For the first time we want to gather political organisation , interested individuals and pro masses, coming together to seal up ideas to form a dependable organisations that will fight for the interest of people.

Ajai urge Nigerians to stand up and join the movement.

He described the move by the Nigerian Police Force as a “gross abuse of power”.

“The sealing up the venue of a public discourse is unacceptable in a democracy.

The groups noted that even under the past administration ,colonial and military regimes, Nigerians still fought for, and defended their rights.

We will advice the citizens to rise and defend their rights and nobody can stop the will of the masses.