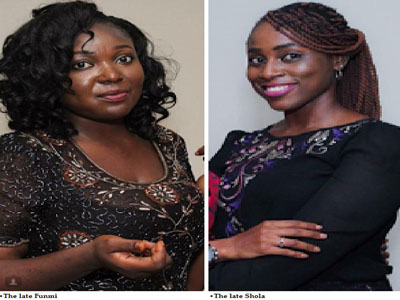 The Lagos State Police Command says it has arrested two managers of the Elegushi Beach in Ajah where two postgraduate students of the University of Lagos drowned on Sunday during their friend’s birthday.

The command, however, declined to disclose the names of the suspects, adding that it was on the trail of some other members of the management to investigate their complicity in the incident.

Punch Metro had reported that the deceased – Adesola Ogunmefun and 25-year-old Funmi Odusina – were having fun with their friend, Bolu, on the beach when they were submerged by strong tides, which swept them into the Atlantic Ocean.

They had graduated from the Covenant University and were on the verge of bagging their Master’s Degrees in International Law and Diplomacy from UNILAG.

While Ogunmefun was brought out dead, Bolu and Odusina were said to have been rushed to some private hospitals in the area which rejected them.

Odusina died on the way to the Lagos Island General Hospital, while Bolu survived.

Families and friends of deceased had blamed the deaths on the alleged failure of the beach management to provide necessary safety devices like life guards, a wave alarm system, an ambulance and a medical unit at the facility and condemned the indifference of the hospitals that rejected the victims.

Odusina’s elder sister, Bukola, had also lamented that the incident shattered her sister’s dreams to become a philanthropist, an ambassador and a mechanised farmer, calling on the government to ensure that the beach had adequate safety devices.

The Lagos State Police Public Relations Officer, SP Dolapo Badmos, on Wednesday told Punch correspondent that the names of the arrested managers would be disclosed as soon as their culpability in the circumstances surrounding the deaths was ascertained.

Badmos said the suspects were under interrogation and the command would visit the scene of the crime to assess its safety devices.

Meanwhile, the spokesperson for UNILAG, Mr. Toyin Adebule, said some representatives of the institution would pay condolence visits to the families of the deceased on Thursday (today).

“The department will visit the families tomorrow (Thursday),” Adebule said in a text message.
Punch