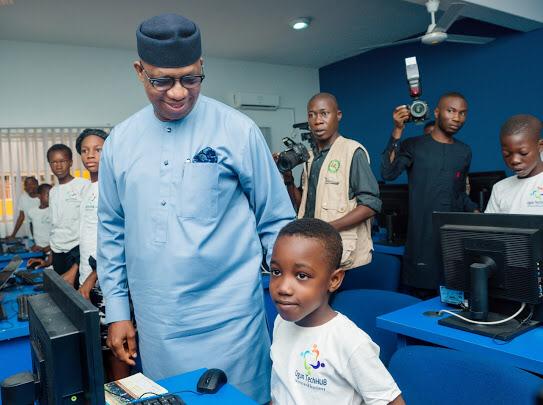 Ogun State governor, Prince Dapo Abiodun, says all uncompleted project started by the immediate past administration that has direct impart on the socio-economic well-being of the people, will be completed, as his governernment is not out for vendatta.

Prince Abiodun who gave this indication at the launch of Ogun TechHUB along Kobape Road, Abeokuta, said his administration could afford to abandon the projects as they were executed with public fund.

“I want to use this opportunity to assure our people that we will not abandon any project that has direct benefit to the people. Those projects were done with the people’s money. We will ensure their completion because we are not interested in vendatta”, he Said.

He said the TechHUB underscored his administration resolve to digitally transform the State, just as the centre woul form a platform for incubating ideas that would profer solution s to human problems.

The Governor said similar centres would established in the other two Senatorial Districts, expressing the hope that technology develop at the centre would attract foreign exchange to the State and nation.

While calling on the people, especially the youths to take maximum advantage of the Programme, the Governor said an advisory council would be constituted for the TechHUB, calling on well to do individuals and corporate bodies to partner the State government in achieving it set goals.

Speaking earlier, the Special Adviser on Information Technology, Mr. Dayo Abiodun said the centre would serve as place where technologists, government, impact investors and others in and around Ogun State would use of information technology fo find new solutions to various social problems in Nigeria.

The President, Nigeria Computer Society, Professor Adesi a Sodiya, said the centre would help in building capacity and skills for sustainable development, adding that the centre would launch the State into global stage.