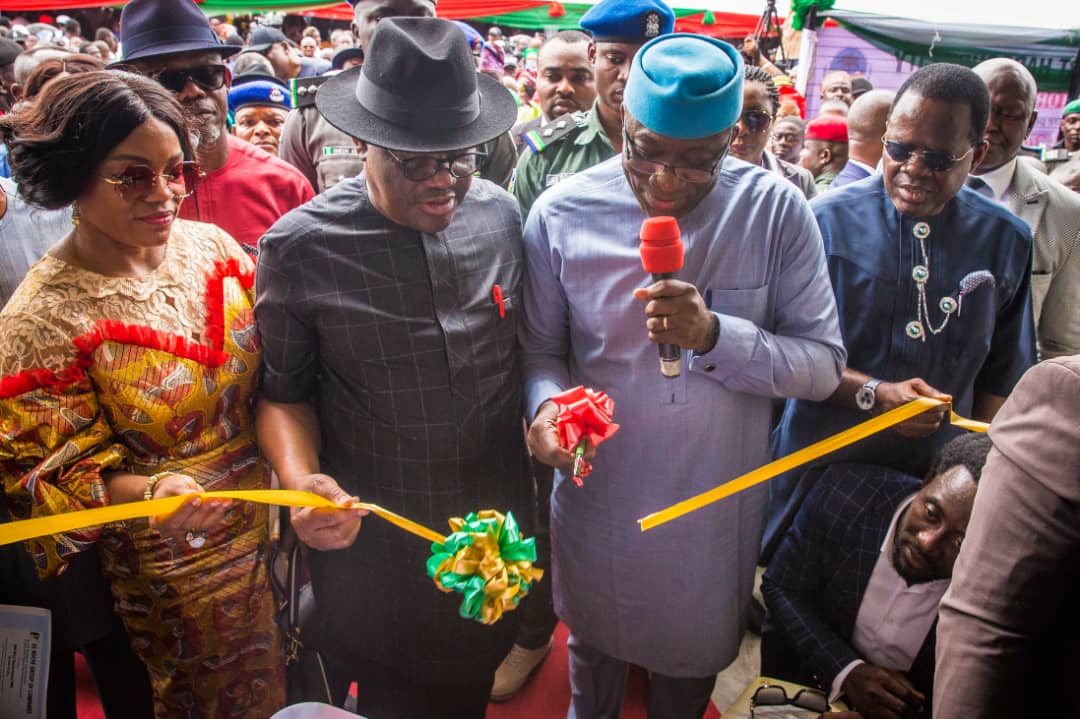 Rivers State Governor, Barr. Nyesome Wike has described his Ekiti State counterpart and Chairman of the Nigerian Governors’ Forum ( NGF), Dr Kayode Fayemi, as a highly focused leader who does not discriminate against members of tbe opposition party, but sees them as partners in progress.

Governor Wike gave the comendation, Wednesday in Port Harcourt, during the commissioning of the ultra modern Rumuwoji Market as part of activities marking the first 100 days of his second term in office.

Wike said Governor Fayemi was given the honour of commissioning the market in recognition of his rare qualities as a leader who does not discriminate based on political party affiliation.

He said: ” My brother, the Chairman of NGF, Governor Fayemi is a great leader. He has never discriminated against opposition parties. He sees everybody as partners in progress.

” He is one of the few leaders who understand that a political party is a vehicle to get into government and that party affiliation should not bring animosity, especially when development is the focus.

Governor Wike recalled how Governor Fayemi’s intervention helped to douse the tension that was brewing over the issue of mosque demolition in the state earlier in the month.

“He called me when he heard about the development. He came here and intervened in the matter, not minding our political party affiliation. That is leadership. And such a leader should be encouraged” He added.

Governor Fayemi, in a short remark before commissioning the market complex also has hailed his Rivers State counterpart, Barr. Wike for his developmental strides in the state.

He described Wike as a frontline member of the NGF, adding that he was impressed by the Rivers State Governor’s penchant for people- oriented projects, which he said had earned him the nickname ” Mr Project”.

Dr Fayemi who was the special guest of honour at the event, said government is about affecting the lives of the people positively and ensuring that “we fulfil promises made during electioneering period.

He said his role as NGF Chairman is to support, protect and defend members of the Forum regardless of party affiliation.

The two governors later led other dignitaries and traders on an inspection of facilities in the ultra modern market.