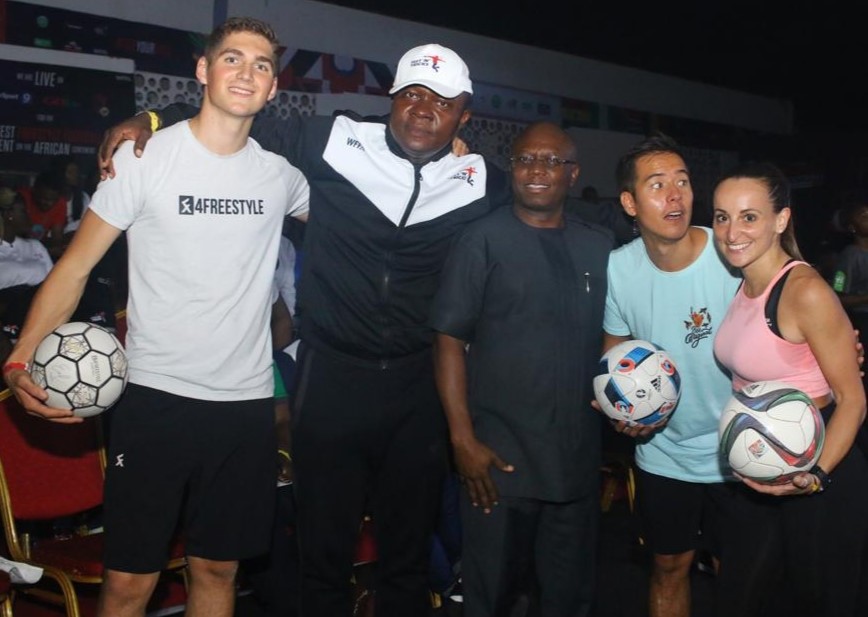 The 2019 African Freestyle Football Championship ended on a high note, with defending champion Abdul Titi Kone of Cote d’Ivoire emerging as the African Champion once again. This event marked the 2nd edition of the African Championship and the 3rd annual edition of the Nigerian Championship hosted by Feet ‘n’ Tricks International Limited. The final was a repeat of the 2018 championship, as Kone again defeated Egypt’s Yousef Mohamad just as he did in last year’s final while Ashley Mhkize of South Africa placed third.

This year’s edition accommodated at least 30 African countries that participated at the championship.

The Chairman of AFFC, Valentine Ozigbo, who commended bank for being at the forefront of promoting freestyle football for the past two years, said Heritage Bank is “always very innovative and supportive to the cause of entertainment and youth development.

According to him, these achievements would have been impossible without the extensive support of the official bankers (Heritage Bank) for the championship for two years running.

Speaking further, Ozigbo hinted, “since inception, Feet ‘n’ Tricks has been committed to promoting freestyle football talent to stardom and we haven’t relented. Through this platform, we have seen talented freestylers get a head start in life, travel to exciting places and represent our beloved continent doing what they know how to do best.”

The MD/CEO, Heritage Bank, Ifie Sekibo, said the bank has strong desire towards developing and positioning youths to become world-class citizens equipped and ready to be absorbed into an increasing competitive professional skills and endeavours.

Sekibo, who was represented by an Executive Director, Jude Monye advised the youths who were participants to adopt strong positive character to enable them take advantage of the platform being presented to them.

“One of the reasons why we chose, as an organization, to support the freestyle championship is to enhance youth development in sport and entertainment, which will empower them play vital roles in the socio-economic development of the country and help curb the high level of unemployment,” he stressed.

According to Sekibo, the drive to support youths seeks to create, preserve and transfer wealth across generations.
It is against the backdrop of the competition that Nigeria Football Federation (NFF) President, Amaju Pinnick, promised to give more support to the entertaining part of football.

“We need to encourage this entertaining part of football because what they are doing here is great. Freestyle is quite interesting, and I am happy with what I have seen so far.

“With this project, a goal has been achieved. I also want more ladies to come out and do freestyle football because it is highly entertaining and competitive.

“I will see to how we can give more support to freestyle football in the future,”he said.

Congratulating the Feet n Tricks team, Daniel Wood, Co-founder and Head of Global Partnerships, World Freestyle Football Association (WFFA) said, “Feet n Tricks have proven that they can produce world class events and we are so excited to be extending our partnership. We are fully committed to creating opportunities for young people and this event is to be the focus point for our sport in the continent of Africa.” //End.//