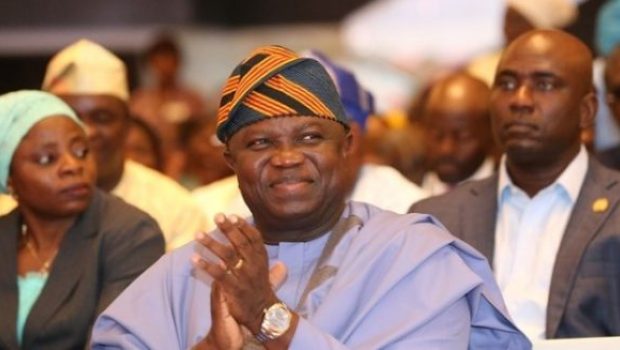 …Lawmakers Plead For Time As Court Adjourns Till Nov 20

The Lagos State House of Assembly on Wednesday agreed to halt proceedings in the probe of former Governor of the State, Mr. Akinwunmi Ambode, over procurement of 820 buses for public transportation.

Ambode had instituted a suit against the Assembly, the Speaker, Mudashiru Obasa and others, to contest the constitutionality of the probe, accusing them of bias and misrepresentation of facts.

When the matter came up in court on Wednesday morning, Ambode’s lawyer, Mr. Tayo Oyetibo (SAN), informed the court of his pending application for interlocutory injunction, saying that same had been served on the defendants.

In response, a team of lawyers of the defendants led by Mrs. Adenike Oshinowo and included Mrs. Adegbite and Ms. Olayemi Johnson confirmed service of the application, but pleaded for time since the processes were served at about 6pm on Tuesday.

They specifically requested for two weeks to respond but the date they suggested was not convenient for the court.

Responding, Oyetibo did not object to the application of the defendants for adjournment but urged the Court to direct parties to maintain status quo. In her response, the presiding Judge, Justice Yetunde Adesanya, said “it goes without saying” and called on Mrs. Osinowo for her response who also agreed that status quo would be maintained by the Defendants.

The court then adjourned the matter to November 20 2019 for the hearing of the motion on Notice for interlocutory injunction.

With the ruling, the former Governor cannot be summoned to appear again before the House probe panel as both parties have agreed to maintain status quo till the new hearing date.

According to his statement of claim before the court, Ambode had said contrary to deliberate misrepresentation of facts by the lawmakers, the procurement of the 820 buses was well captured in the 2018 Appropriation Law which was duly approved by the House.

“Part of the items authorized by the Bill under Capital Expenditure was: “LAGBUS Public Transport Infrastructure (MEPB); Part financing of 820 buses” which was item 8 under schedule 1- Part C of the Bill,” the former Governor averred.

He added that having prescribed the manner of withdrawal of funds in sections 3 and 4 of the 2018 Appropriation Law, it was unconstitutional for the House to attach another condition in section 9 of the law for further approval to be sought before incurring any expenditure on the purchase of the buses.

Highlighting the specific breach of his constitutional rights to fair hearing by the House, the former Governor said on August 27, 2019 during proceedings of the Assembly, some lawmakers thoroughly vilified and disparaged him as having purchased the buses without budgetary approval and that the procurement was a waste of public funds, while at the end of the proceedings, the House resolved to constitute an Ad Hoc Committee to probe the procurement.

He said it was surprising that the very lawmakers who contributed actively in vilifying, disparaging and denigrating him constituted the bulk of the members of the Committee, which was a clear derogation of his right to fair hearing.

Ambode added that in continuation of deliberate misrepresentation of facts of the issue, the House falsely claimed that an invitation had been extended to him to appear before the Committee but that he failed to honour the said invitation.

“The Claimant states that no letter of invitation was delivered to him before the 4th and 5th Defendants made the false allegation against the Claimant which was widely reported by various national Newspapers in the country.”

He added that the House Committee and indeed the entire members of the House had already adjudged him as having committed wastage of public fund by the procurement of the buses in question and had also already determined that the procurement was done by him as opposed to the State Government.

He said it was obvious that the lawmakers were totally biased against him having regard to their pronouncements on the floor of the House by reason of which he believes that his right to fair hearing as guaranteed by the Constitution had been seriously compromised by the defendants.

He is, therefore, seeking among others, the court’s declaration that the power of the House to pass a resolution under section 128(1) of the Constitution to cause an inquiry into his conduct as Governor is subject to right to fair hearing as guaranteed by section 36(1) of the Constitution.

He also wants a declaration that the Resolution of the House setting up a 9-Man Committee comprising of the 4th-12th Defendants to investigate all transactions in respect of the 820 Buses said by the defendants to have been procured by him derogates from his right as guaranteed by section 36(1) of the Constitution and therefore is unconstitutional, null and void.

He is therefore, among others seeking:

“AN INJUNCTION restraining the Defendants whether by themselves, their servants, agents and or representatives from representing or continue to represent to the Public that the Claimant, AKINWUNMI AMBODE, procured 820 buses in breach of budgetary approval.”