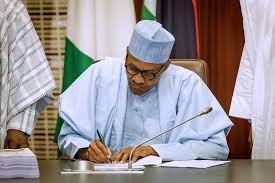 The President of the Federal republic of Nigeria, Muhammadu Buhari has written to the Senate to consider John Terhemba Tsoho as the Chief Judge of Nigeria’s Federal High Court. Saharaweeklyng.com reports

The president in a letter to the sent to the senate on Tuesday nominated Tosho as the new chief justice of Nigeria and this letter was read out by the Senate President, Ahmad Lawan, on Tuesday.

John Tsoho was sworn in on July 26 2019,as the acting chief justice of Nigeria.

The letter from Mr president States that: “Pursuant to Section 250(1) of the constitution of the federal republic of Nigeria 1999 (as amended), I hereby write to request for confirmation by the senate, the appointment of honourable Justice J.T. Tsoho as the chief Judge of the federal high Court of Nigeria,” he wrote.

The president nominated Benedict Bakwaph Kanyip as the president of the National Industrial Court of Nigeria.

Related Topics:politicspresident Buhari
Up Next

WE HAVE ENSURED EQUAL ACCESS TO EDUCATION, HEALTH, OTHERS – OGUN GOVT