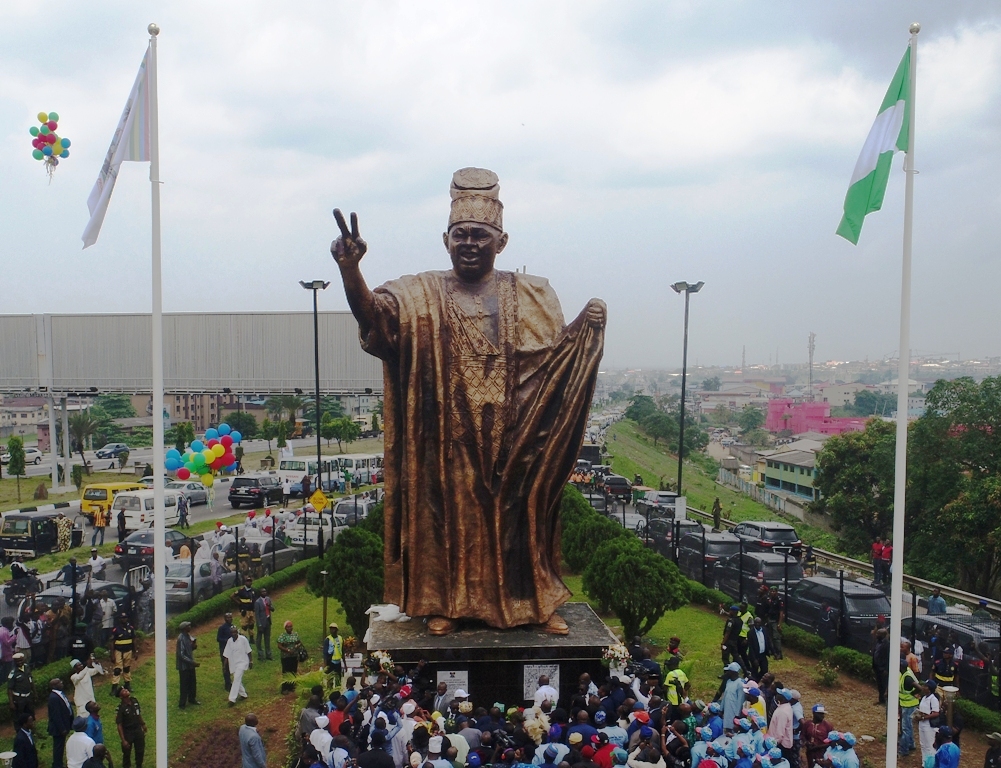 Lagos State Governor, Mr. Akinwunmi Ambode on Tuesday unveiled a 46-feet statue of Nigeria’s symbol of democracy and adjudged winner of the June 12, 1993 Presidential Election, Bashorun Moshood Kasimawo Olawale Abiola (MKO), expressing optimism that the monument will forever crystallize what he stood for in his lifetime.

Governor Ambode, who spoke at the unveiling of the statue at the MKO Abiola Garden in Alapere, Ketu said it was in the tradition of the State Government to recognise and remember heroes and heroines who contributed to the greatness of the nation and the State in particular, adding that MKO Abiola deserves the best from the State as Lagos was his success story.

Alluding to the fact that a statue was previously sited at the location, the Governor said that his administration decided to erect bigger statues for MKO Abiola and late Rights Activist, Chief Gani Fawehinmi to properly situate their immense contribution to nation building.

“There was a statue done by my predecessor, Babatunde Raji Fashola but in the divine world, some things are more glorious than what you think and so we decided at the end of 2016 that we should do bigger statues for Chief Gani Fawehinmi and MKO Abiola since almost everybody passing and entering Lagos go through this particular Ojota axis and so we started late in 2016 that we should build something bigger and so it took us about a year to do this. By the time we did the one for Gani to celebrate his posthumous birthday on April 22, we also agreed that we should unveil that of MKO Abiola today, June 12.

“But just as if God has a way of crowning all efforts to mark the 25th Anniversary of June 12, our President, President Muhammadu Buhari has deemed it fit to give our own MKO Abiola the highest honour in the land, GCFR and that is why we believe strongly that your presence here is not just for this statue but it is also historic which we would always remember in the annals of the history and politics of this country that sooner than later, there would be one day we would mark as MKO Abiola Day.

“We are very happy to gather here today at the MKO Abiola garden to unveil this statue, a monument that will forever crystallize his legacy, serves as a reminder to the greatness that Chief Abiola represents in our socio-political landscape,” the Governor said.

He described MKO Abiola as a man who transcended race, tribe and religion, adding that the late philanthropist appealed to all Nigerians who voted massively for him during the 1993 Presidential election.

“Sadly, he lost his life trying to secure his mandate. Even though he was from another State, Lagos was his home. And we recognize his contribution to our State and our democracy,” Governor Ambode said.

Responding on behalf of the family, MKO Abiola’s son, Abdul Mumuni Abiola thanked Governor Ambode and the Lagos State Government for the honour done the Abiola family, saying the statue was indeed befitting to honour his late father.

“God is great. I heard about this statue six months ago and I was called to come and see it and when I got here, I saw a statue of three-storey building. This is indeed massive. The family of late MKO Abiola really appreciates this and we want to thank the Governor,” Abdul Mumuni said.

He also appreciated President Muhammadu Buhari for posthumous award conferred on his father and declaring June 12 as the Democracy Day, as well as the National Leader of All Progressives Congress (APC), Asiwaju Bola Ahmed Tinubu for standing solidly behind the struggle.

“We also pay glowing tribute to the beautiful memories of patriots such as Alhaja Kudirat Abiola, Pa Michael Adekunle Ajasin, Pa Abraham Adesanya, Chief Michael Enahoro, Chief Alfred Rewane, Dr Beko Ransome Kuti, General Adeyinka Adebayo and several others including innocent ordinary Nigerians, young and old who were murdered in cold blood on the streets of Lagos and in other major cities of Nigeria. Today, we declare that their sacrifice has not been in vain,” he said.

The Governor commended Asiwaju Bola Ahmed Tinubu for being the pioneer Governor to declare public holiday on June 12 throughout his tenure in office as well as Mr. Babatunde Raji Fashola (SAN) for his steadfastness in upholding the tradition, saying that the occasion attests to their visionary leadership.

Speaking on the theme: “Restructuring: Antidote For Efficient And Effective Polity,” guest lecturer, Dr. Dele Ashiru of the Department of Political Science, University of Lagos (UNILAG), called for the amendment of the Constitution to ensure removal of provisions which inhibit successful running of functional system, especially revenue sharing formula which he said must be by derivation, among others.

He also said considering the strategic importance of Lagos to the country, special attention must be given to the State, adding: “The Federal Government must wake up and pay Lagos adequately from the national resource so that the State can continue to play the role it had been playing in the country.”

He described Lagos as a model and mega city not only in Africa but the world, and as such all hands must be on deck to work for its sustenance.

Also, Chairman of June 12 Coalition, Comrade Linus Okoroji commended the Lagos State Government for sustained commitment to the June 12 struggle which had yielded fruits with the recent declaration of the day as Democracy Day in Nigeria and recognition of MKO Abiola as GCFR.